While online insurance buying in China is rising substantially, deals to venture-backed insurance tech startups have been thin on the ground.

While China’s first online-only property-and-casualty insurer Zhong An has risen to $8B in private market value, the country has seen relatively few venture-backed insurance tech startups, according to CB Insights data.

As the chart below highlights, Chinese insurance tech startups outside of Zhong An have raised just $205M in disclosed funding across fewer than 20 companies since 2010. Zhong An, which was founded in 2013 as a joint venture between Alibaba, Tencent, and Ping An Insurance and has written more than 3.6 billion policies, and in June 2015 raised $931M from investors including Morgan Stanley, China International Capital Corp., and Keywise Capital Management. The company is reportedly planning a domestic IPO for 2016. 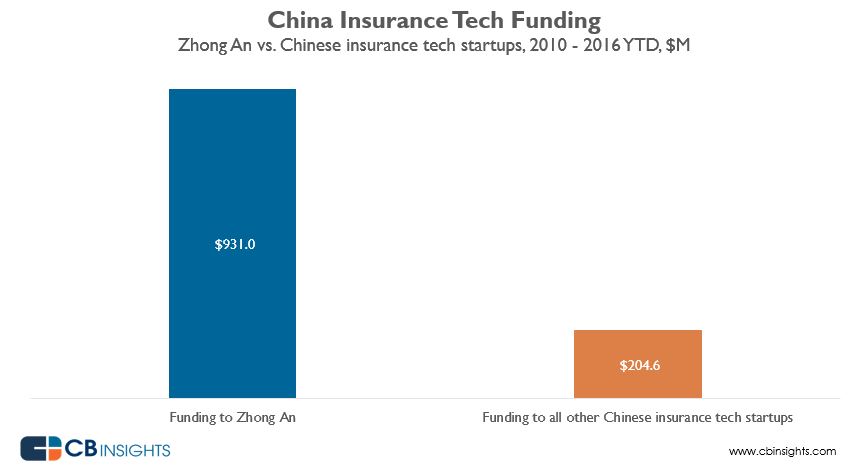 That’s not to say that online channels aren’t transforming Chinese insurance purchasing. Insurance products sold across third-party channels including Alibaba’s T-mall, JD, and Ctrip have gained in popularity. In the first half of 2015, China’s online insurance premiums nearly hit $13B, according to the Insurance Association of China.

As we earlier highlighted, insurance tech activity and “coopetition” by Alibaba, Baidu, and Tencent has quickened substantially as evidenced by their partnership, M&A, and investments over time. The latest in the string of moves was Alibaba’s announcement to start an online health insurance joint venture with China Taiping Insurance.