Research Brief
2532
Zenefits has raised $217M more in total funding when compared to the aggregate funding of its competitors. Will the sizable funding advantage help them get through their current woes?

Zenefits’ raised a gargantuan $500M financing round in May 2015 which valued the company at $4.5B. Described as the fastest-growing SaaS (software-as-a-service) company of all time, the company’s fortunes turned after a series of regulatory issues came to light which ultimately resulted in the company’s CEO, Parker Conrad, stepping down. One of the issues as reported by William Alden of Buzzfeed was that that the company had built software to help brokers cheat on licensing requirements.

Subsequent reporting by Julie Bort and Eugene Kim at Business Insider painted a picture of a company that spiraled out of control and that resulted in bans on drinking alcohol and having sex at the office.

It was a PR nightmare that could bury most startups.

But Zenefits had raised a funding warchest which may help them weather this storm. To put their funding in perspective, we compared the total funding of Zenefits to seven of its VC-backed competitors using CB Insights data on company comparables.


Zenefits vs the competition

Outside of the enormous $500M Series C Zenefits raised in May 2015, they raised roughly $84M across their Seed, Series A, and Series B rounds. In comparison, competitors like Gusto, Justworks, Lumity, EaseCentral, Maxwell Health, Flock and Namely in aggregate have raised roughly $367M to date. 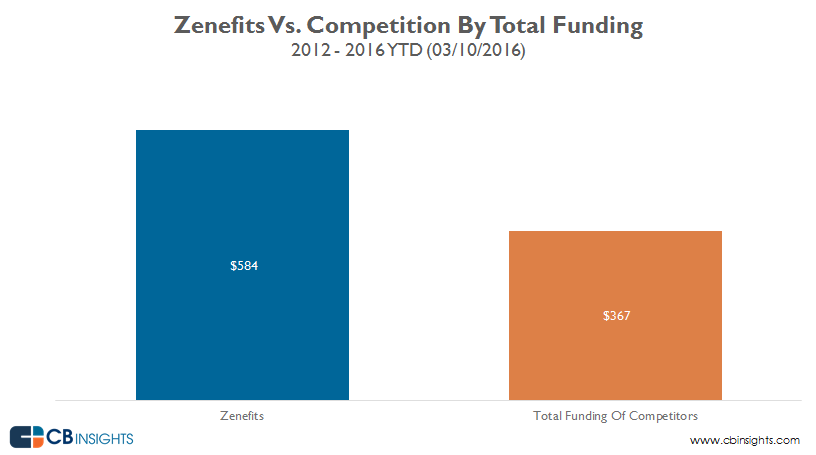 To put the total funding comparison in perspective, we breakout the individual funding figures of Zenefits and its seven competitors.

Arguably Zenefits‘ largest competitor is HR insurance and payroll software startup Gusto (formerly ZenPayroll) which has raised $136M to date. Other competing companies to raise large amounts of funding include New York-based Namely, which has raised roughly $103M since 2012. Both companies account for the bulk of funding raised by Zenefits’ competitors, however the total funding figure still comes nowhere near Zenefits’ total as can be seen below. 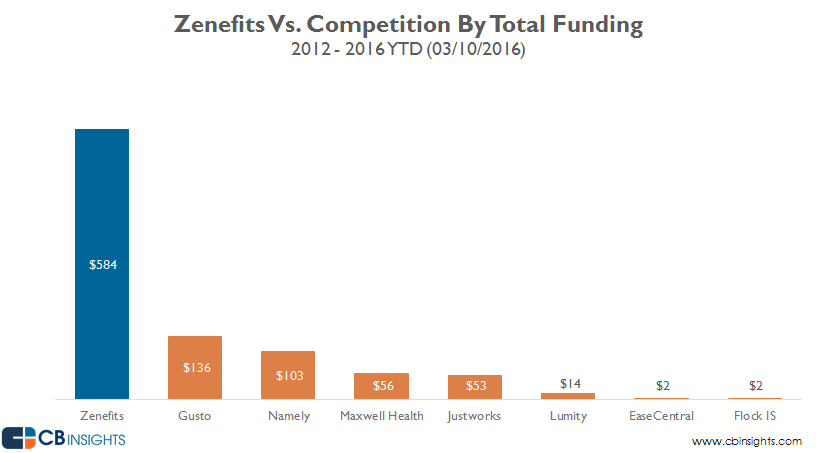 Want more data on HR tech companies? Login to CB Insights or sign up for free below.