Y Combinator is the world's top accelerator. Its alumni have raised $3.5 billion. We used Investor Analytics to crunch the data around their portfolio and its composition over time.

With a recent $970M exit for Twitch (YC Summer 2007), and a pair of $10B+ valuation companies in its portfolio (Dropbox, AirBnB), Y Combinator is the undisputed heavyweight accelerator champion of the world.

[Tweet “Y Combinator is the undisputed heavyweight accelerator champion of the world.”]

Y Combinator (YC) was originally founded by Paul Graham, Robert Morris, Trevor Blackwell, and Jessica Livingston in Cambridge, MA. Today, the elite accelerator is based in Silicon Valley and is led by Sam Altman (previous Co-Founder of YC company Loopt) and a number of partners, many who are former founders who’ve gone through the program. It is well-known for its secret dinners which pull in Silicon Valley’s elite as well as its alumni gatherings. Y Combinator invests in two “classes” per year, which have grown from under 40 companies in the mid 2000’s to approximately 85 in the latest Summer 2014 class.

Specifically, we’ll discuss Y Combinator’s portfolio and activity that has helped shape the program including:

Y Combinator has had over 70 exits since its founding in 2005. The first exit was in online community Reddit (Summer 2005), which Conde Nast acquired in October 2006 for a rumored amount of between $10-20M. This started a trend that the chart below shows, where the majority of YC’s exits have come from companies that have raised $5M or less, a signal of a high number of early sales and acqui-hires.

The top three largest Y Combinator exits are as follows: 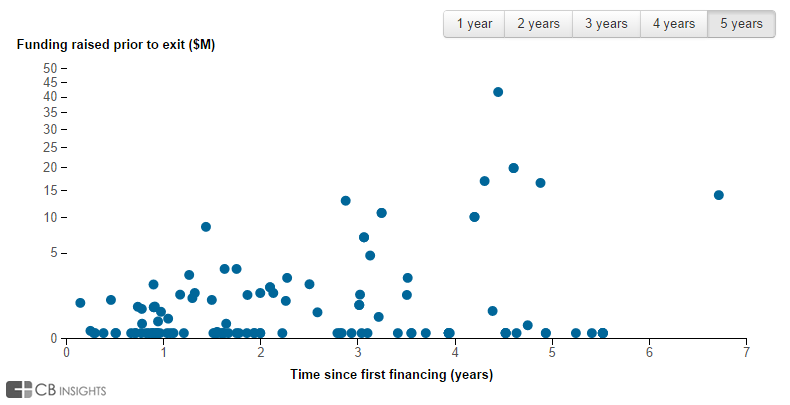 New Y Combinator President Sam Altman has proudly touted YC’s most recent class as being incredibly diverse with companies working in everything from quantum computing to nuclear energy to biotech. Although this new diversity could signal a shift in YC’s investment thesis, the bulk of the companies that YC has funded from 2012 to before the Summer 2014 class have been in the Mobile and Internet spaces. When drilling deeper into the Internet space, companies in HR & Workforce Management (Zenefits, ZenPayroll), Education & Training (One Month, Clever) , and Business Intelligence, Analytics, and Performance Management (DataRank, FarmLogs) have been some popular areas of investment. 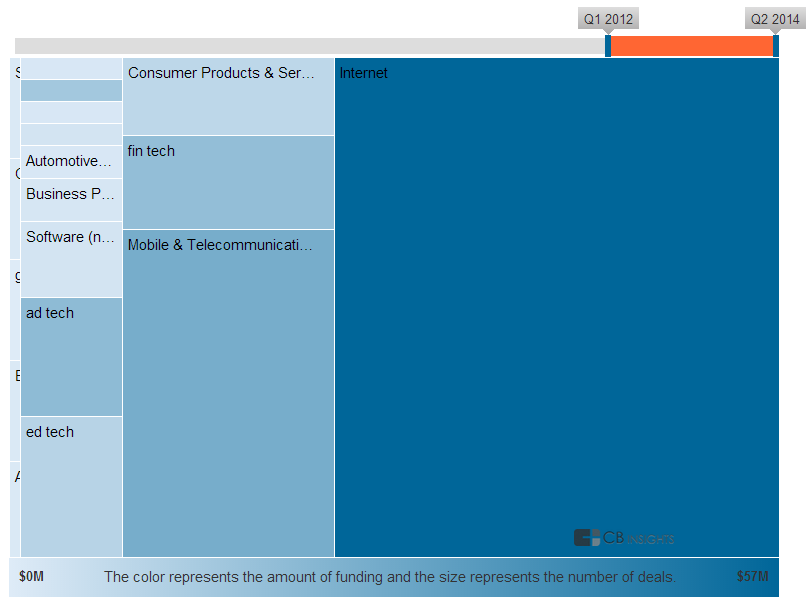 As an accelerator, Y Combinator’s main duty is to prepare its companies for the next round of financing. 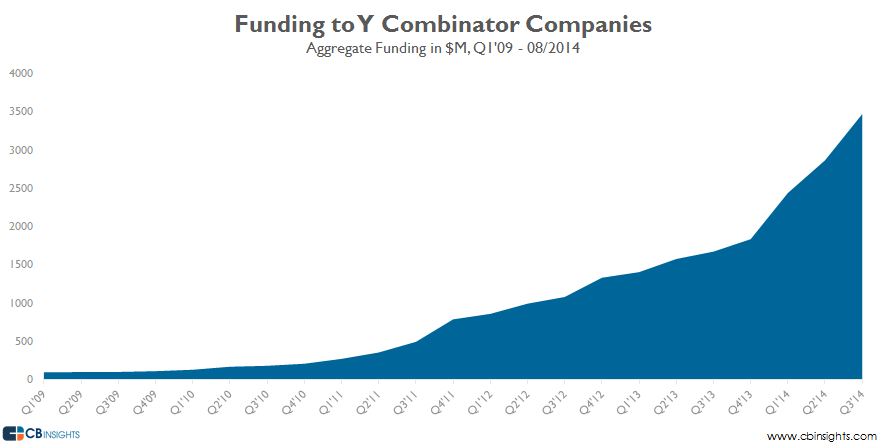 In 2011, SV Angel created an investment vehicle with DST’s Yuri Milner to invest a $150k convertible note into every Y Combinator company called Start Fund. After a year, Start Fund was replaced by a VC program called “YC VC” that consisted of Yuri Milner, Andreessen Horowitz, General Catalyst, and Maverick Capital all investing $20k each (so $80k total). On September 4th, Sam Altman wrote on the Y Combinator blog that none of these firms will have an exclusive investment relationship with YC companies any longer.

When looking at those who have invested after Y Combinator, investors with close relations to the fund appear at the top with SV Angel (Zenefits, Instacart), Andreessen Horowitz (Airware, Coinbase), and YC partner Paul Buchheit (DoorDash, Homejoy) investing in the most YC companies. Other YC Partners including Garry Tan, Alexis Ohanian, and President Sam Altman topped the list.

If you want to track Y Combinator and the accelerator’s syndicate partners and frequent acquirers, create a free trial account below for access to CB Insights venture capital database.