Research Brief
1373
A data-driven analysis of Yahoo's M&A history under Marissa Mayer sheds some light on what on Yahoo may acquire with their Alibaba billions.

With a ~23% stake in Alibaba, Yahoo will be a big beneficiary of the Alibaba IPO. With the potential gains from the IPO, where will Yahoo focus its acquisition efforts? We used CB Insights’ Acquirer Analytics to look at where Yahoo might be going.

The full analysis below.

Note: 100% of the visualizations and data you see in this analysis are directly from the CB Insights platform’s Acquirer Analytics tool.

While 18 of 29 2013 M&A transactions were acqui-hires, 2014 has seen Yahoo focus less on buying struggling companies for talent. This year has seen Yahoo’s second largest disclosed acquisition since Mayer began with the $300M+ purchase of Flurry, a mobile analytics company. The $1.1B acquisition of blogging platform Tumblr still sits as the largest during Mayer’s tenure. 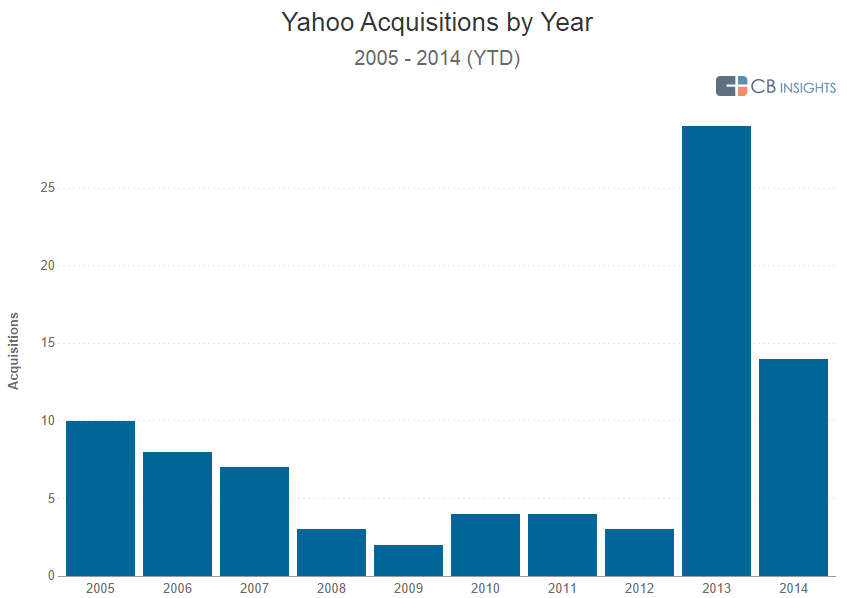 Since Marissa Mayer took over the reins at Yahoo, Mobile-Social has seen the most acquisitions of any sub-industry, with 4 acquisitions including GoPollGo, Stamped, Propeld and Meh Labs. Internet-Social companies also saw multiple acqui-hires behind Snip.it and Astrid.

More recently, Yahoo has shifted their M&A focus to ad-tech with 3 acquisitions (Luminate, Flurry, ClarityRay) over the past two months. Others have opined that the ad-tech pickups could play a role in Yahoo’s video strategy. The company has invested significantly in creating a platform for original content through acquisitions in EventLive and OnTheAir as well as by developing original shows and attracting top tier talent like Katie Couric to be their “Global Anchor”. Video and ad tech are areas worth looking at given the company’s recent M&A in the space.

Below are the industries in which Yahoo has acquired multiple companies since Q3’12.

US acquisitions in Mayer’s time have largely been of companies based in California which made up nearly 80% of deals from Q3’12 to Q3’14 YTD.  New York follows with 12.5% of deals with the Wander and Qwiki acquisitions. 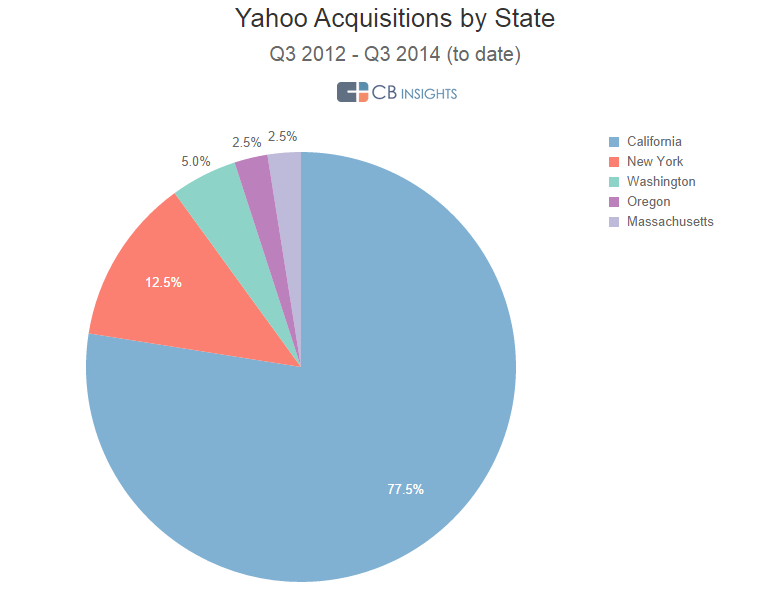 Of all investors, Khosla Ventures and Google Ventures (surprise) have had the most portfolio companies acquired by Yahoo since Mayer took over. Khosla Ventures’ four acquired companies include Xobni, Incredible Labs, Snip.it, and RockMelt, while Google Ventures’ exits include Astrid, Stamped, Wander, and Luminate, a recent acqui-hire focused on placing ads within images. Below is a list of investors with multiple exits to Yahoo since July 2012.

For more data surrounding Yahoo and other investors’ M&A activity, create a free trial account below for access to CB Insights venture capital database and the Acquirer Analytics capability.