We dive into one of the world's most popular cryptocurrencies, from a simple explanation of what Ethereum is to some of the currency's uses and drawbacks (and what it has to do with cats).

Bitcoin was built using a tech called blockchain to create a global, distributed ledger of transactions.

This ledger or digital history is stored on hundreds of thousands of computers. So it can’t be spoofed or changed. It’s controlled by no one and secured by cryptography.

But bitcoin is limited in what it can do. On the strength of blockchain, bitcoin has grown into a trusted system for exchanging and storing value. But what if you want to negotiate an economic agreement or a future transaction?

Put differently, where else might an unchangeable decentralized record prove useful?

To answer this question, Ethereum used the same blockchain technology to create “smart contracts,” allowing programmers to create code that binds two parties to an agreement without an intermediary needed. Ethereum contracts have been created to distribute insurance payments, to run prediction markets, and more.

Here’s a quick take on how a smart contract works vs. a traditional contract: 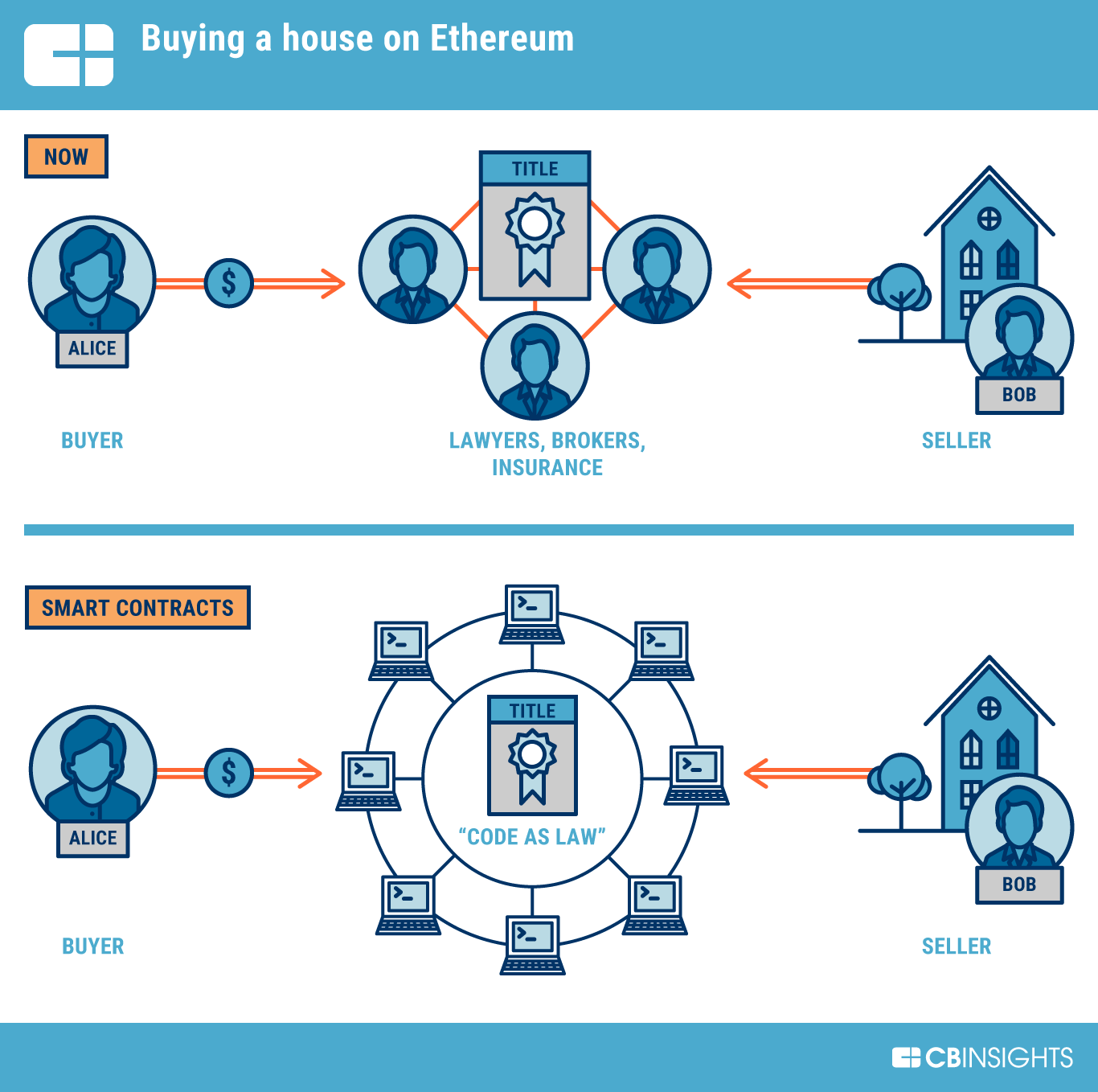 In this report, we’ll explain Ethereum, “a decentralized platform that runs smart contracts,” and a protocol on which many teams are building new applications.

In a previous explainer, we examined bitcoin and blockchain technology in depth. But we’ll review the key concepts here as well before we dive in.

What is blockchain technology?

It’s hard to separate Bitcoin from blockchain technology. Still, if we were to define “blockchain” by itself, it might look something like this:

In essence, blockchain technology was created as a sophisticated way to prevent digital transactions from being faked or duplicated, without the need for a Visa or MasterCard as an intermediary.

What is a smart contract?

But Ethereum isn’t about transactions per se, it was created to power smart contracts.

To illustrate a smart contract, let’s say Alice and Bob enter into a bet.

Alice thinks that the temperature tomorrow morning will reach 70 degrees. Bob thinks that it won’t. They wager 10 bitcoin on the outcome.

If Alice and Bob don’t trust each other, they will have to use a trusted third party as an escrow agent. In other words, they will each have to give the agent that amount of money, and the agent will distribute the winnings and the amount staked to the winner.

There’s no way around the middleman in this scenario, even using a cryptocurrency like bitcoin. The Bitcoin blockchain has no way to record this “contract.”

Ethereum offers a “smart” solution. Alice and Bob could agree to use some basic code — an “if, then” contract of sorts — that pays out based on the temperature. If the temperature is higher than 70 degrees, the code is programmed to pay Alice, otherwise, it pays Bob. Alice and Bob could then place their “programmed” bet on Ethereum’s blockchain. At that point, it becomes binding from a technological standpoint.

This is a “contract,” because Alice and Bob have agreed to its terms, to a degree transforming code into law. It’s “smart” and “decentralized” because all participants in the Ethereum blockchain hold a copy of this contract.

Smart contracts like these are what make Ethereum so compelling. By using them, Ethereum creates a blockchain for any programmable use-case, whereas Bitcoin’s blockchain was pioneered exclusively as a payments application.

So what is Ethereum?

Ethereum wants to be the platform on which these decentralized applications are built.

Think about it like this: every time a smart contract executes or a program runs, thousands of nodes execute the same contract or run the same program. Every time a program or contract or user performs some action, all nodes have to agree that the action took place.

In this way, a decentralized network – Ethereum’s blockchain – is allowing these programs to run, instead of a central authority. Where the Bitcoin network validates ownership of bitcoins, the Ethereum blockchain validates smart contracts and executes according to their encoded rules. 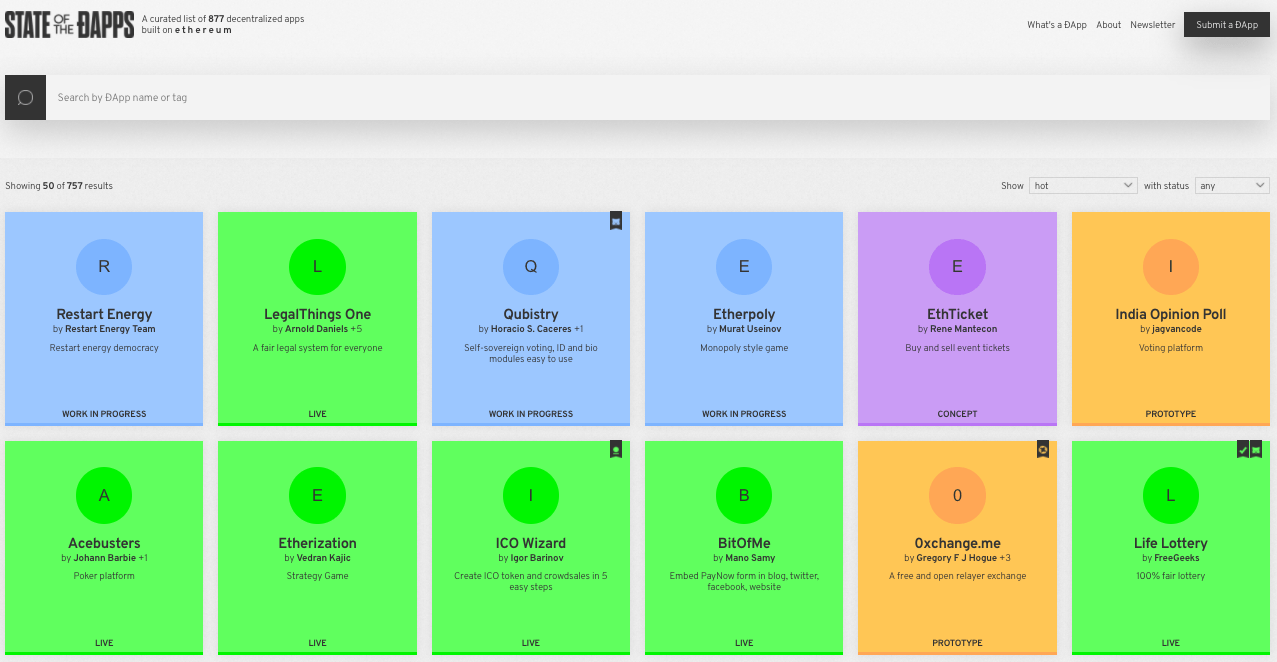 A sample of decentralized applications being built on top of Ethereum.

With its smart contracts Ethereum hopes to be a kind of massive decentralized computer. That’s why it’s sometimes called the Ethereum Virtual Machine or EVM.

The smart contracts, after all, are just bits of code, ranging from the rudimentary like the Alice and Bob example above, to the very complex in the case of a derivatives contract if it was placed on the Ethereum blockchain.

Here’s where a twist comes in. In order to run their decentralized applications or “dapps,” users of the blockchain must pay in Ether or ETH, which is ethereum’s version of bitcoin. The more computationally expensive an application is, the more ETH that’s required to run it.

ETH is also traded by speculators and others who believe the value of the Ethereum project and network of dapps will increase over time.

Note that because every single operation on the EVM is executed by every node, computing on the EVM is expensive. Therefore — and according to Ethereum’s development tutorial — the best current use-cases for Ethereum are for running business logic: “if this, then that.”

Other use cases might be prohibitively expensive. Due to current issues around scalability and the size of Ethereum’s blockchain, more computationally-intensive programs will find it difficult and expensive to operate on the EVM.

Now that we’ve explored its key concepts, let’s turn to the Ethereum Foundation’s website for a succinct and complete definition:

Cryptokitties launched in November of this year and is a popular blockchain-based game. According to its site: “While CryptoKitties isn’t a digital currency, it does offer the same security: each CryptoKitty is one-of-a-kind and 100% owned by you. It cannot be replicated, taken away, or destroyed.”

Cryptokitties uses the Ethereum blockchain to create unique, digital assets. These assets are digital cats, each with their own defining characteristics. Ownership is tracked via the Ethereum blockchain, and pre-defined “smart contracts” determine each cat’s unique “genetic and physical” characteristics and allow for buying, selling, and breeding. 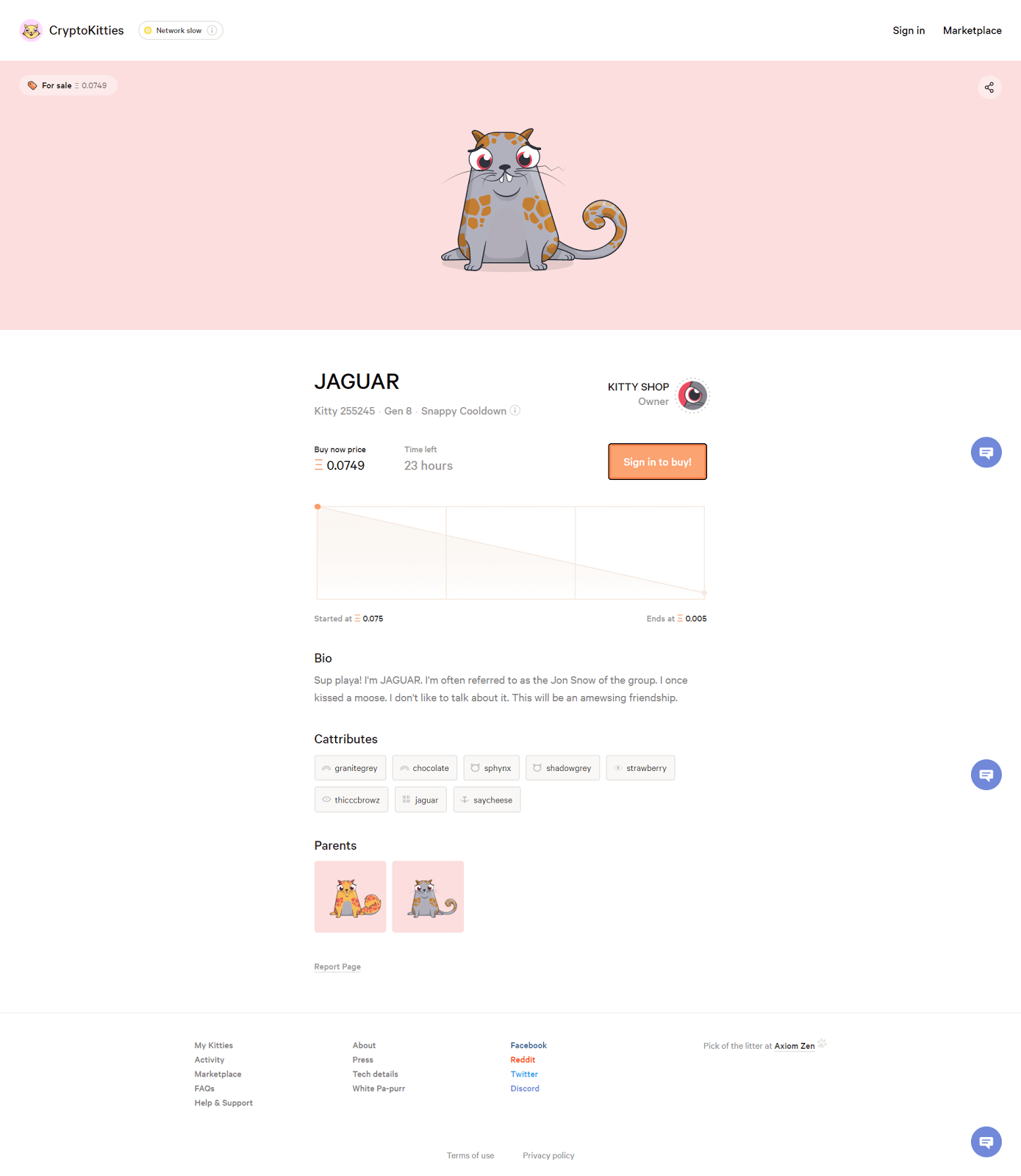 According to its profile, Jaguar has unique “cattributes” and is a “Gen 8” cat, or an 8th generation cat. Jaguar has parents, who themselves had parents – all the way back to ‘Gen 0.

Cryptokitties are traded for real money, with the most expensive cat (named “Founder Cat #18”) selling for a whopping $110,000 in ether. Founder Cat #18 has “royal purple” spots and “crazy” “mint green” eyes. It’s also got five children.

Over $14M in ether has been spent on Cryptokitties since launch.

Why does Ethereum matter?

While somewhat silly, Cryptokitties underscores an important point: Ethereum works. The game is entirely decentralized, and everyone knows the owner of each digital cat.

Because Ethereum is decentralized, once a program is uploaded it can’t be shut down by any sort of centralized actor. Just like Bitcoin, there is no central point of attack. Cryptokitties will remain on the Ethereum blockchain forever.

Here’s another way to think about it: where Bitcoin could help users avoid banks, Ethereum could help users bypass platforms like Facebook, Amazon, or any number of more complex middlemen. Once upon a time, developers of a game or a collectible like CryptoKitties might have launched a Farmville-style game on Facebook, or a physical product on Amazon.

Today, instead of doing that or building their own blockchains from scratch, developers can use the EVM to create their own decentralized applications – like Cryptokitties.

Many teams building on top of Ethereum launch their own “tokens” that provide utility within their decentralized applications. These are specialized tokens built on top of ethereum (which, yes, has its own token, i.e. ether). 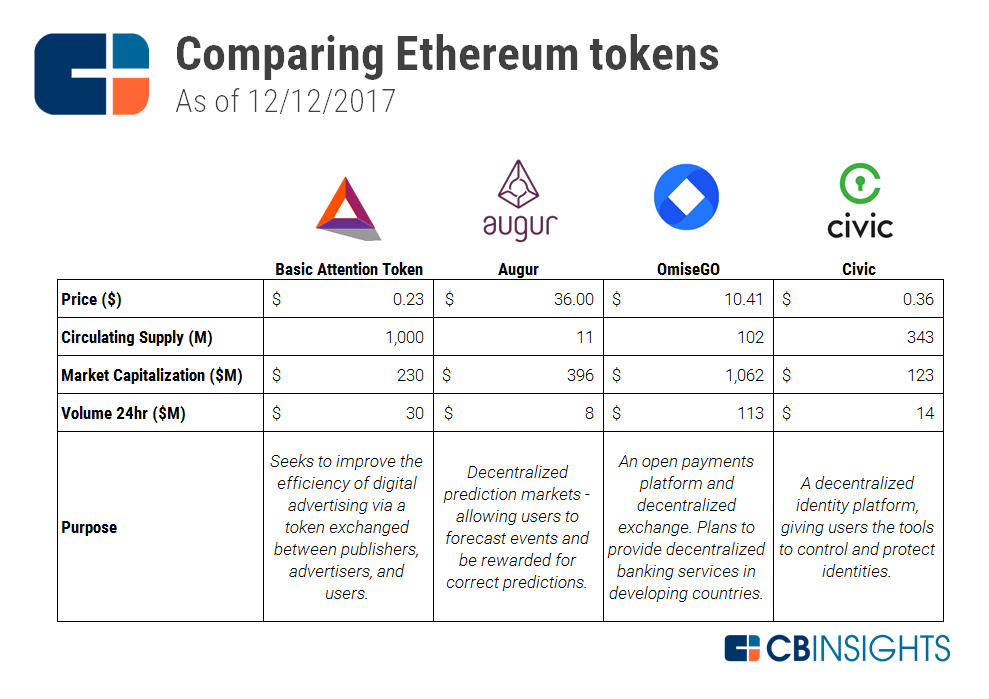 In the case of Cryptokitties, these “tokens” are actually the digital cats themselves, with ether used to purchase them. As the network becomes more popular and demand rises, these scarce digital cats might also see their value rise.

What are some issues with Ethereum?

For Ethereum to work, lots of participants need to hold up-to-date copies. This means that the same database is held by thousands of nodes. This is fairly inefficient.

Consider cloud computing: cloud computing allows multiple nodes to interact on a single database. These nodes don’t have to hold their own private copy of this database.

Ethereum – and blockchain technology generally – mandates the inverse. All nodes have to hold a copy of Ethereum’s blockchain. As of December 11, the full Ethereum blockchain takes up around 34 gigabytes of storage.

Further, Ethereum nodes receive constant updates with the latest “state” of the Ethereum blockchain. Because nodes are distributed around the world, blockchains have high latency (latency is the amount of time it takes for data to move through the network).

Combined, Ethereum’s size and transaction speed make it difficult to scale. For perspective, consider again that Cryptokitties currently comprises 10% of all transactions on Ethereum’s blockchain. This is not a problem in and of itself, but this traffic is slowing down the Ethereum blockchain generally (although Bitcoin’s blockchain remains significantly slower, with higher transaction fees).

Still, there’s room for optimism. Scaling remains of utmost importance for the Ethereum Foundation — the development community behind Ethereum — and numerous solutions are currently being explored.

Why does Ethereum have a market cap of $60B?

Ethereum’s blockchain allows for the creation of a decentralized computer. This computer is the first one of its kind.

By creating a decentralized computer, Ethereum acts as a base layer for decentralized applications. Ethereum’s built-in cryptocurrency, ether, can be traded on online exchanges for dollars or other government-backed currency — just like bitcoin.

Coinbase and Gemini are examples of such exchanges.

Ethereum’s computational power is scarce, and developers pay with ether to use the Ethereum blockchain.

Ether’s dollar value is subject to the supply-and-demand mechanics found in any marketplace. If investors find the Ethereum blockchain valuable — and developers are building decentralized applications — then demand for ether might rise, causing its price to rise in turn. The opposite could also happen.

As we’ve highlighted, Ethereum is still in the nascent stages of building its platform for decentralization applications. So much so that one game, CryptoKitties, was recently using 10% of all its capacity.

Still, smart contracts are an important innovation, and allow for the creation of complex blockchain use-cases.

As Ethereum evolves, decentralized applications will likely take on forms yet to be imagined.