Research Brief
2176
The US is still attracting 79% of funding to wearables, but countries like France and China are beginning to rise.

Wearables startups are advancing on many fronts including medical devices, AR/VR, and biometric sensors. The wide range of applications helped 2014 reach a multiyear high for private-company funding in the space. We used CB Insights data to break down the geographic patterns defining wearables deals.

Investment dollars and deals are in the US

Looking at the last six years, investment deals and dollars in wearables are overwhelmingly going to startups in the United States. Between 2010 and Q3’15, 90% of the dollar funding and 83% of deals went to US-based companies. 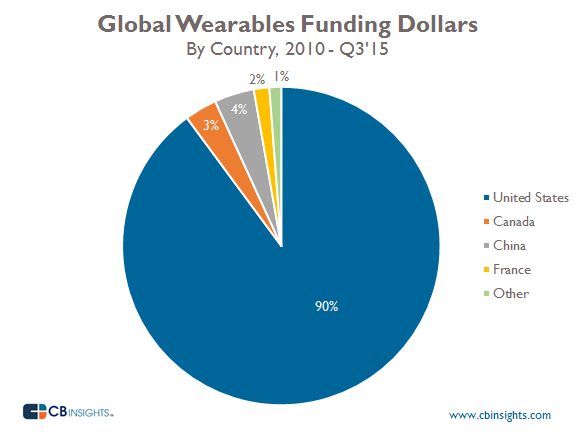 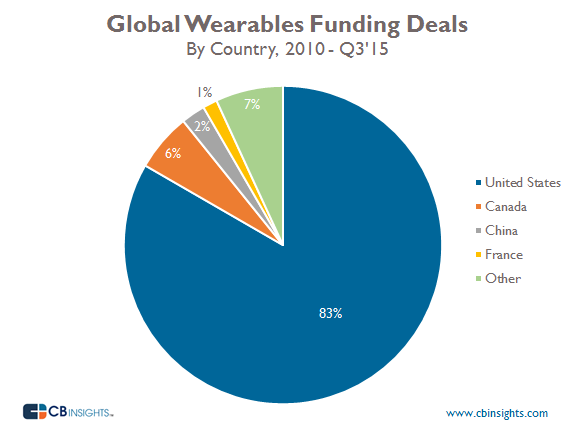 But the pattern of US dominance may be ebbing away. US dollar share has been on a slow descent ever since 2011, when the US utterly dominated wearables startup investments. Fast-forward to the first three quarters of 2015, and the US is attracting only 79% of deals. 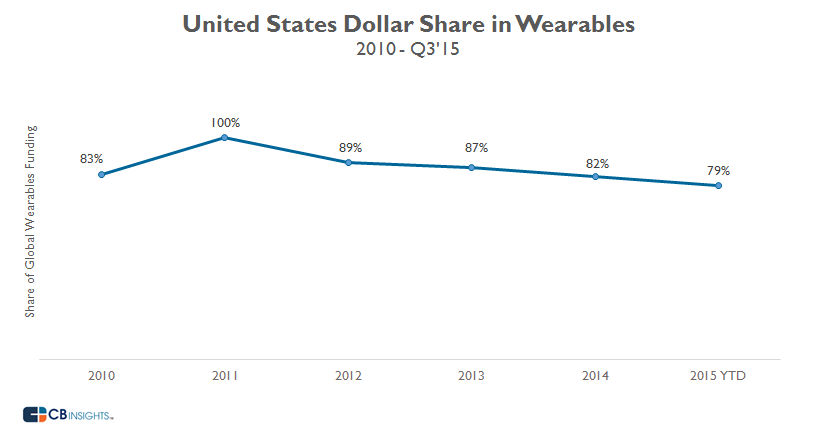 Within the US, California remains dominant

California, Massachusetts, New York, and Texas had the greatest share of deals among US states. California tops the list in every year, reaching a peak of 80% of domestic deals in 2011. More recently, other states have driven a larger slice of deals. California currently stands at 43% of US deals.

Not pictured in the chart is Colorado, which was absent from the funding picture until this year, when it accounted to over 10% of US wearables deals in 2015. These included early-stage financings going to Stryd and Revolar. 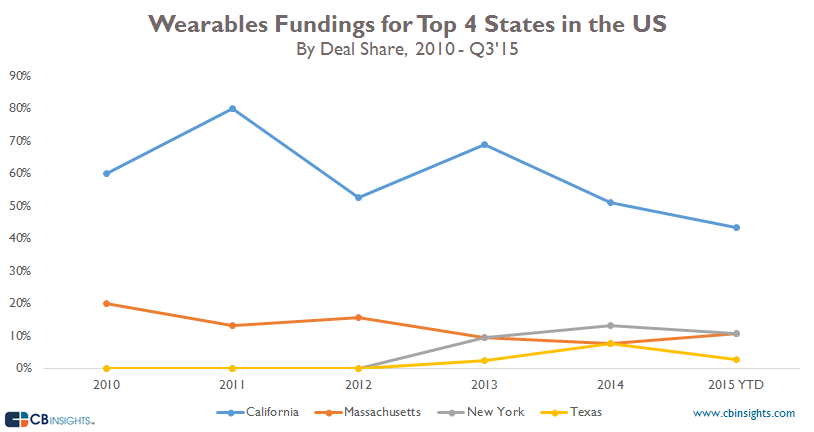 Top countries for wearables outside the US

Outside of the US and Canada two countries — China and France — have seen the most action in terms of wearables deals.

Over the last 5 years, Canada has seen over 10 financings. The majority of Canadian deals were to early-stage startups. Only one of the deals in Canada came at Series B or later, the $10M Series B financing of InteraXon in Q2’15. The largest deals went to Thalmic Labs — a $14.5M Series A round in Q2’13 — followed by Nymi raising $14M in Q3’14, also for a Series A.

Following Canada in a distant third and fourth are China and France. Significant deals in these markets include a $35M Series B in Q4’14 to China-based Huami Technology, a wearables manufacturer; and a Q3’13 $30M Series B to French consumer wearables maker Withings.

The investing landscape outside of North America is very fragmented. Outside of the US and Canada no country accounts for more than 2% of deals.

Interestingly, no VCs made multiple investments outside of North America besides Ventech, a French firm. Ventech was an investor in Withings‘ Series A and Series B rounds.