Research Brief
2547
Wearable computing startups saw roughly the same amount of dollar funding in 2015 as they did in 2013.

The wearables market was once hot and Fitbit’s IPO in June 2015 generated enthusiasm for the space, but the recent funding trends tell another story. For much of 2015, funding to wearables startups was on track to fall to a five-year low. A better-than-expected Q4’15 actually kept that from being the case, but annual funding totals have not budged much from those seen in 2012 and 2013.

We used CB Insights data to track annual and quarterly trends in funding to wearable computing, including all head-mounted displays used in applications ranging from connected skiing goggles to virtual reality to enterprise-focused augmented reality.

2015 represented a 63% decline from 2014 results in terms of dollars invested. (The record-breaking wearables funding amount in 2014 was driven largely by the $542M mega-round raised by Magic Leap, a Florida-based developer of head-mounted augmented reality displays.) Perhaps a more telling metric was deal activity, which declined from 96 deals in 2014 to 77 in 2015, a 20% drop year-over-year.

Removing 2014’s boom year from the equation, we see that 2015’s funding total was basically flat from 2013 levels, even with an increase in deal volume. 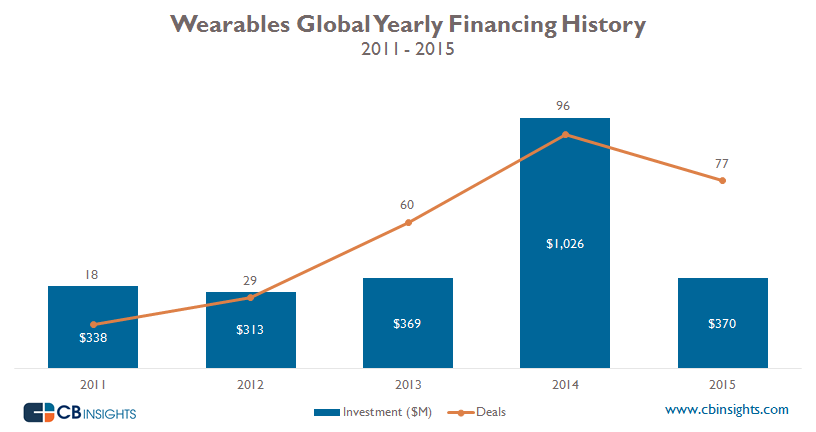 The quarterly trends reveal a more complicated picture in 2015. The last three quarters of 2015 saw steady declines in deal volume, yet there was simultaneously steady growth in capital invested. Q4’15 saw the year’s highest quarterly total in funding, but spread across just 15 deals, with large rounds going to smart apparel maker Athos Works‘ $35M Series C, and another large round going to Eargo, an in-ear wearable maker that raised a $24M Series B.

Overall, the recent downswing in deal volume (and weak annual growth) may be indicative of larger retreat from consumer tech, a category that has driven much of the activity in the wearables market. 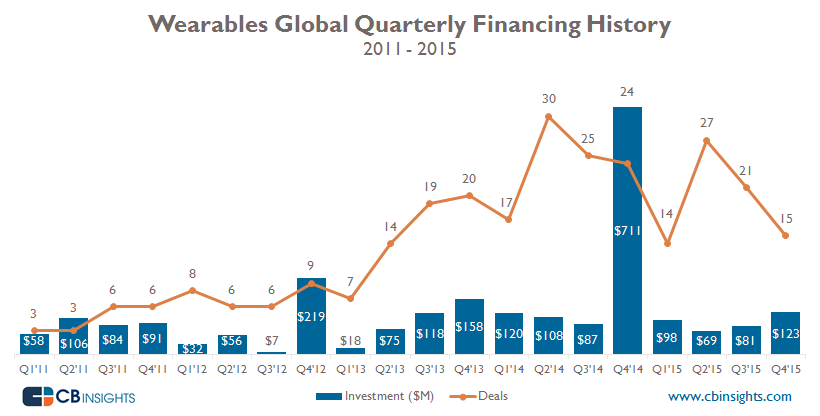 Want more data about wearables startups? Login to CB Insights or sign up for free below.