Deals in the space increased by 135% in 2013 and funding has already hit an annual record in 2014 (in only 8 months). Will Apple's moves in the space and some already big exits spur more investment into the space?

With rumors swirling that Apple will be making a big wearables-related announcement (the “iWatch”) at its upcoming September 9th event, we used CB Insights data to see just how hot the wearables market is.  Over the last 5 years, the wearables space has seen more than $1.4B of investment into emerging, private wearable startups. With the tailwind Apple’s wearables entry & announcement might offer and the already notable exits this year of wearables companies ($3.1B IPO from GoPro and $2B acquisition of Oculus VR by Facebook), it is conceivable that 2014 might be the first year to see more than $1 billion of investment flowing into wearables.

This wearables research brief will cover:

First, how do we define wearables? The different sub-categories within wearable computing as well as some of the companies within each are provided below:

When we look at the 5-year trend of investor-backed wearable companies, the upward trend is clear and rapid. Between 2012 and 2013 we saw a 135% jump in deals, and funding has already reached an all time high of $502M in investments so far, which is a 38% year over year increase from 2013 (and four months remain in 2014).

Looking at a stage breakdown, the majority of deals in the past two years have occurred in the early stages as more companies enter the market. This is expected given wearables is essentially a new category.  More than two-thirds of all recent deals have occurred in the Seed/Angel and Series A stages with a total of 56 deals in the last two years. Funding has been concentrated in Series A and B rounds, with $249M and $193M being invested respectively in the past two years. 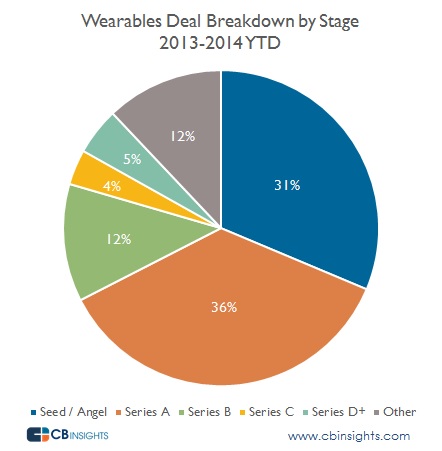 California has been dominant in the wearables space having seen investment in more than $745M in 34 different companies. This represent nearly 77% of total funding and half of all companies funded in the space. However, many wearables companies are located internationally, including:

The chart below represents the geographies that are most active based on number of unique companies located in these areas. 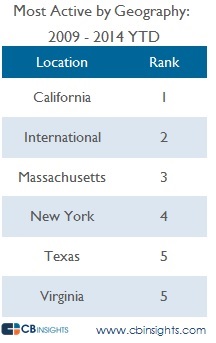 Among investors, True Ventures has invested in the most unique wearable companies, followed by Andreesen Horowitz and Khosla Ventures. Other smart money VC’s on the list include First Round Capital, Bessemer Venture Partners, and Intel Capital. All of them have invested in Seed, Series A, or Series B stages, with the only exception being Jawbone which has received later stage funding from A16Z, Khosla, and KPCB. 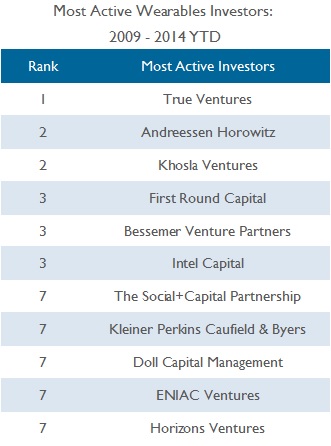 While the industry is still maturing, a handful of companies have received a significant amount of funding. Jawbone takes the top spot with $471M in funding, followed by Fitbit and MC10 both of which raised Series D funding in 2013 bringing their total funding above $60M. Of the top 10 best funded wearables companies, Khosla Ventures has invested in 3 of them highlighting the firm’s keen interest in the space. 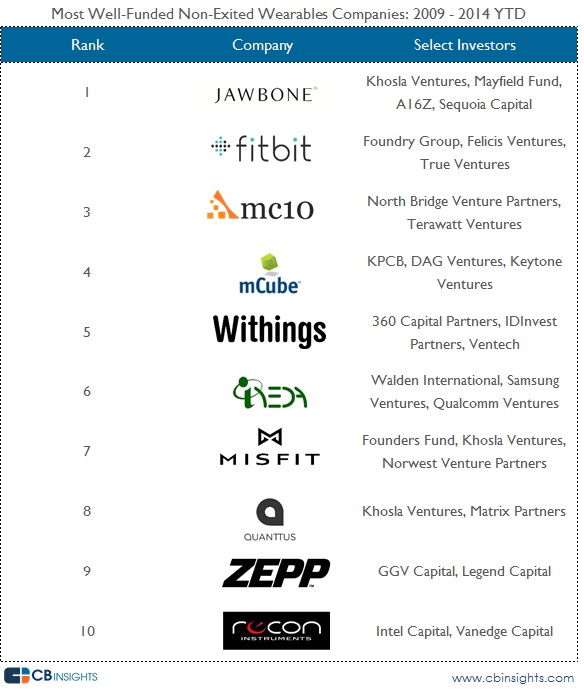 Given the nascency of the indusry, there have not been many exits. GoPro and Oculus dominated the list with their multi-billion dollar valuations, but other companies with notable exits include: 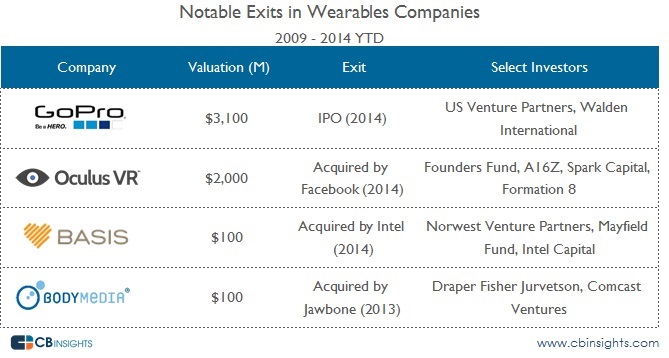 This analysis includes private company investments in the wearables industry by venture capital firms, corporations, corporate venture investors, hedge funds/mutual funds, and angels. Debt, grants and lines of credit were not considered in this dataset.

All data in this research brief is from the CB Insights private company database.  Login or create a free account below.