At the current run-rate, 2016 will see a slight increase in deals but a big increase in funding, mostly due to Florida-based Magic Leap.

Historically, the health & wellness category (mostly comprised of consumer fitness bands) has been one of the most saturated areas of IoT funding.

Despite the crowded space, though, there have been some notable recent notable exits, including Withings (bought by Nokia for $191M Q2’16) and Misfit (acquired by Fossil for $260M Q4’15). In addition, Fitbit, which went public in 2015, made good returns for its early venture backers, though the stock is down 53% year-to-date.

We used CB Insights data to examine private market investment into wearables and see how the category is faring now that the device-type is so well established.

Fitness In The Post-Covid World

Download the free report to learn how technology is changing the way we work out.

Wearables are on track to see about as many deals in 2016 as the category saw in the year prior. However, funding is on track for its largest year yet. Much of the funding tally, however, is due to mega-rounds to stealth AR headset maker Magic Leap. At the current run-rate, 2016 will see a 1% increase in deals and 332% increase in funding. 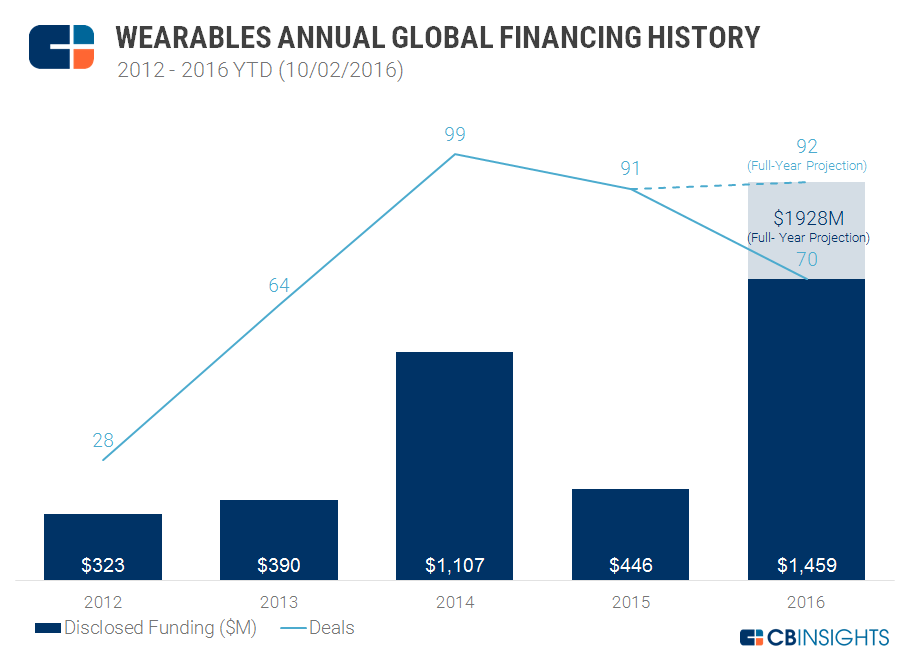 The quarterly trend highlights the impact Magic Leap and its still in-development AR headset has had on the wearable computing landscape: Q’16 and Q4’14, the two largest quarters for funding in the space in more than 4 years, reached those highs largely due to mega-rounds to the stealthy Florida-based AR company. Magic Leap‘s latest Series C fundraising in Q1’16 was for a massive $793M.

Looking at deals, though, in the most recent quarter, activity fell off a cliff. Up until this quarter, deal activity had been relatively stagnant since 2014. But Q3’16 fell far from the quarter prior, dropping from 28 deals down to 14 deals, a 50% fall.