Research Brief
2149
If the current trend persists, funding for wearable computing startups will be down sharply after a boom year in 2014.

Despite these high-profile events, the funding climate for still-private companies in the wearable computing space has cooled off. Dollars invested in wearable technologies in 2015 are on track to hit $276M at the current run-rate, a drop of 72% compared to 2014’s total, according to CB Insights data, and the lowest annual funding total since 2010.

Overall, 2015 saw more modest rounds, the largest being Avegant‘s Series B round for $24M, followed by Doppler Labs raising $17M. 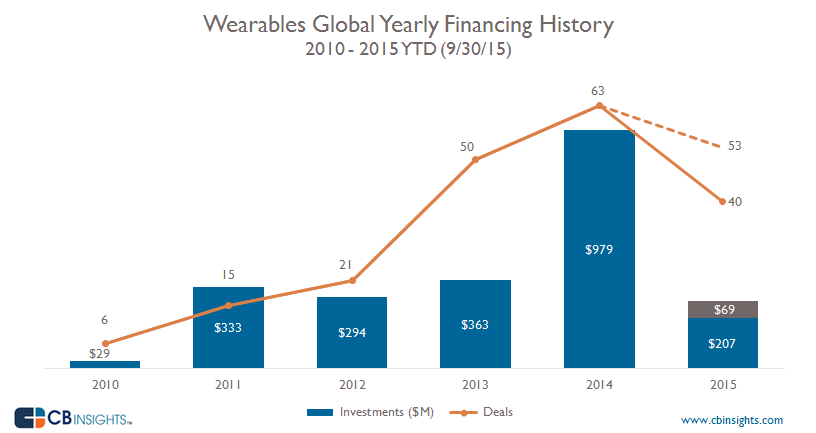 Looking at the quarterly trends, there’s a clear uptick in deals from early 2013 onward. Beginning in Q2’13, deals have ranged between 9 and 19 a quarter, while the range in the previous 12 quarters was between 0 and 7 deals.

The peak quarter for funding was Q4’14, with $685M in investment, but that was largely driven by Magic Leap’s  $542M Series B, mentioned above.

Eliminating Magic Leap’s mega-round ($542M in Q4’14) from the quarterly total, Q4’14 slips to the second-highest quarter for wearables funding, at $143M. The top quarter was Q4’12, the bulk of which came from a deal to GoPro, which exited later that year at a valuation of $3.1B.

The quarterly dollar funding trend is slightly down compared to the quarterly totals in late 2013 and 2014, indicating that deals — while more frequent than a few years ago — are not necessarily larger. 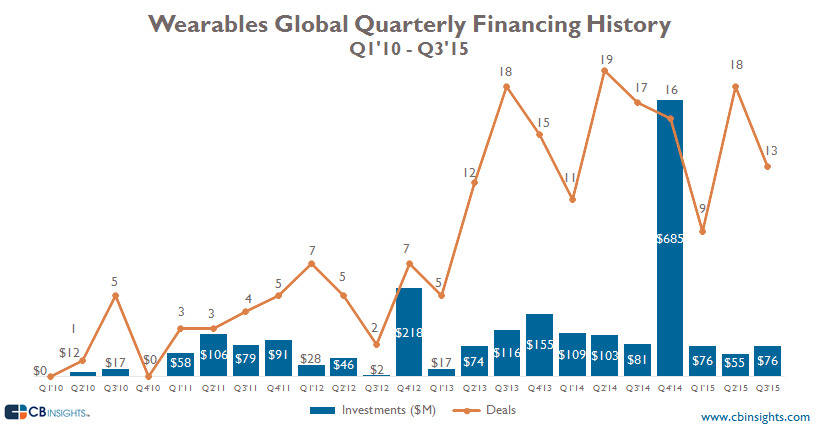 Deals share in wearable tech is trending towards the early stages. Seed and angel investments currently account for 55% of deals, up from 29% back in 2011. 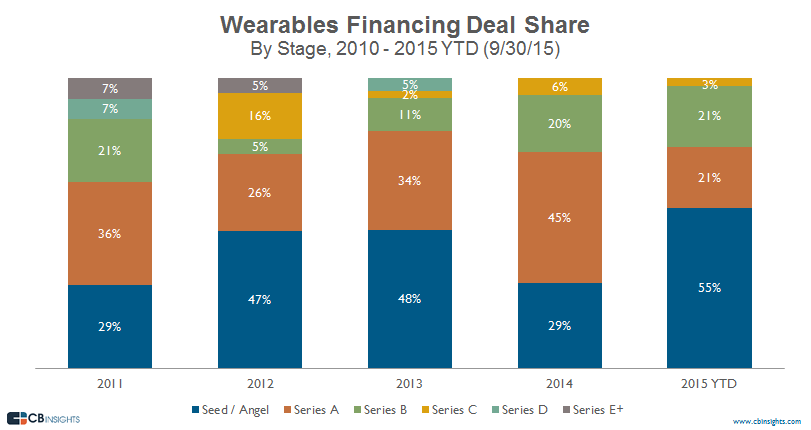 When looking at dollar share, mid-stage deals account for most dollars. From 2012 onward, mid-stage rounds (Series B and C) represented between 50% and 80% of all dollars going to wearable startups annually. Mid-stage deals made up 55% of the dollars invested in 2015 year-to-date. Late-stage deals, Series D and Series E, have fallen off the map. 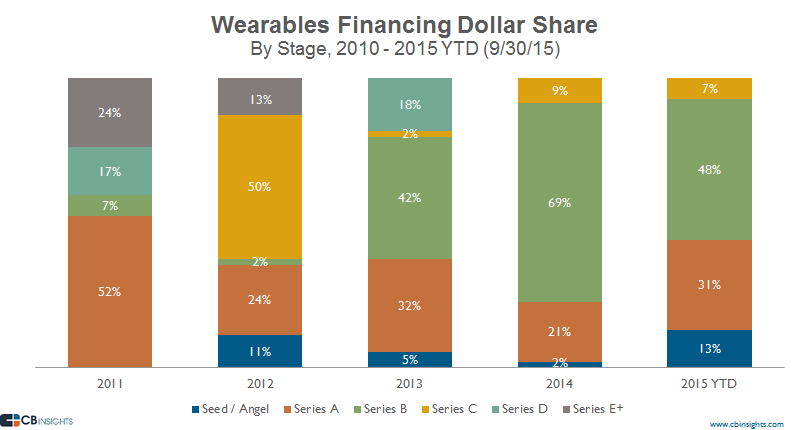 Jawbone, at $614M raised, is the most well-funded private wearables company (Jawbone took on $300M in debt financing in April 2015).

Aside from the established giants, there are other lesser-known, well-funded companies including Polyera, Razer, and Misfit Wearables. Here’s the full list:

Intel Capital is the most active wearables investor with investments in startups like Avegant and Thalmic Labs.

Second on the most-active investors list is Andreessen Horowitz, with investments in companies including Thync, Jawbone, and Magic Leap.

Most active in early-stage deals is once again Intel Capital, followed by Rock Health, an early-stage fund with a focus on digital health and investments in Sano Intelligence and Caeden. Next, Khosla Ventures was third-most active, with investments including Narrative‘s wearable cameras and voice-enabled wearable startup Theatro.