Wealth tech investments hit a quarterly record of 30 deals and are on track to cross 100 deals this year.

Increased transparency is one of the key trends we’ve identified as driving the rise of wealth tech. Now, with the Department of Labor (DOL) confirming that the Fiduciary Rule will go into partial effect on June 9th and be in full effect in early 2018 (after early indications it would be pulled back), the rule could help further boost wealth tech companies. The rules’ core standards require advisors to act in the client’s best interests and increase transparency around fees and costs of services.

Incumbents have already invested in enhancing their infrastructure in preparation for the rule’s implementation but are concerned the added compliance standards will create operational pressure.

We define wealth tech to include fintech companies that offer an alternative to traditional wealth management firms and technology-enabled tools that are advancing the investment and wealth management profession. This includes full-service brokerage alternatives, automated and semi-automated robo-advisors, self-service investment platforms, asset class specific marketplaces, and tools for both individual investors and advisors to keep up with the changing dynamics in wealth management.

Over the last 4 years deals to wealth tech companies have risen consistently. 2016 set a new record for wealth tech deals globally with 98 deals worth $796M in funding. 2017 year-to-date has seen 40 investments worth approximately $315M in funding.

At the current run-rate, global wealth tech investment activity is projected to hit 115 deals worth $905M. This represents 17% growth in deals and a 14% rise in funding from 2016. Though funding is projected to grow above 2016’s total, it is still on track to fall shy of 2015’s record. 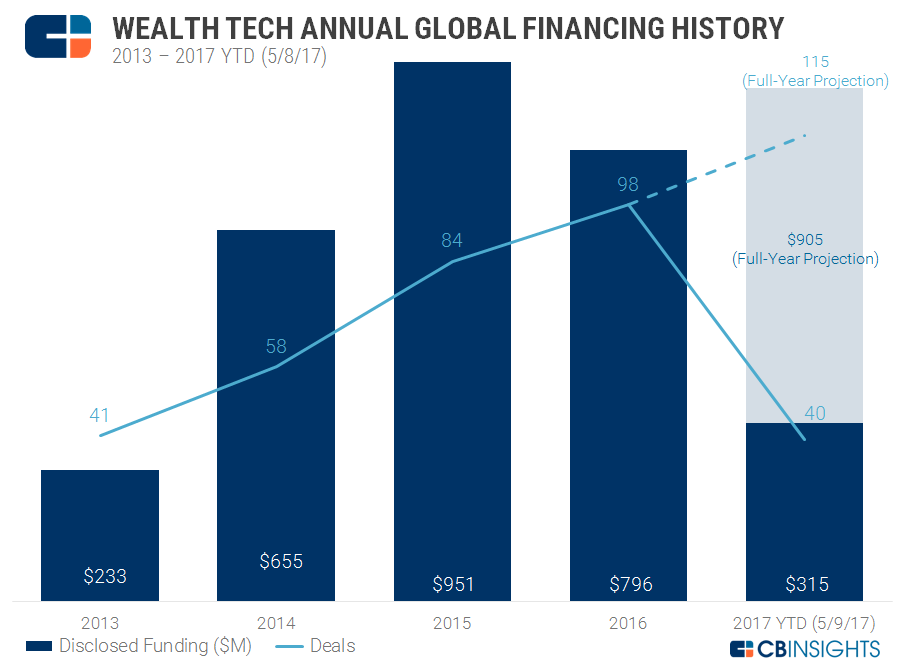 Fintech companies focused on wealth management continue to gain popularity over traditional advisors. Sign up for a free trial and look for Wealth Tech in the Collections tab.

On a quarterly basis, investments to wealth tech companies have been on a general upward trend in the last 5 quarters.

Q1’17 set a new record for deals with 30 deals worth approximately $164M. Despite a record for deals, funding dipped 39% from Q4’16. This dip is largely the result of more deals to early-stage companies and fewer deals to more mature companies.

Q3’15 was the largest quarter for dollar funding, with $409M invested across 24 deals. 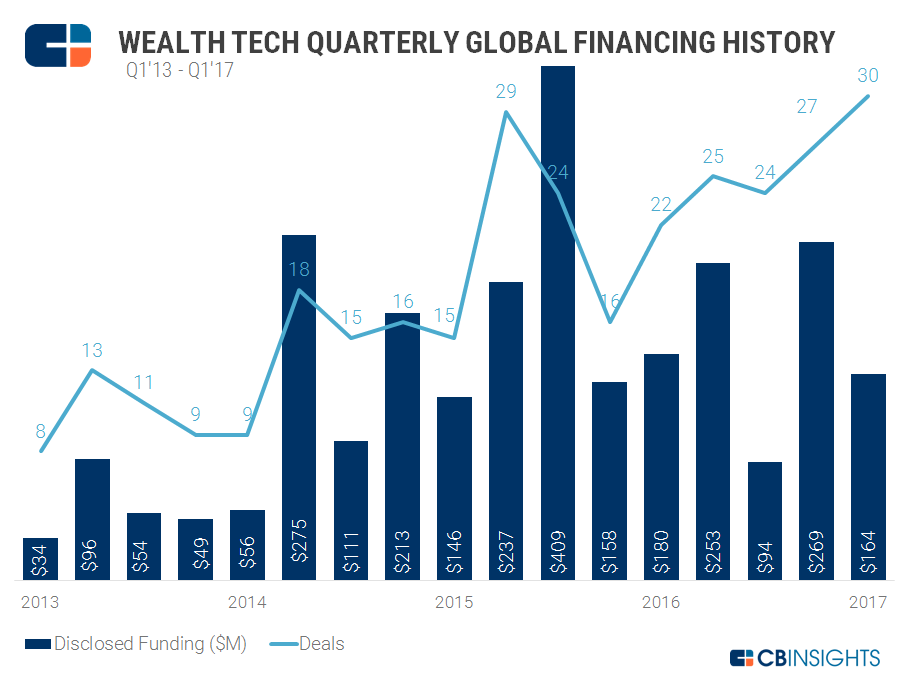 Drilling into 2017 deals year-to-date, approximately 65% of deals have been early-stage investments (seed + Series A). Using CB Insights, we selected a few early-stage wealth tech startups that work across different categories within the space, and chose them based on our proprietary mosaic score.

Our selected companies include LMRKTS, a business-to-business (B2B) investing tool for institutions to monitor portfolio risk and AdvisorEngine, a B2B robo-advisor for institutional investors. The company received their latest investment in April. They have also made 2 acquisitions this year the most recent was Kredible Technologies.