Using our patents search engine, we have unearthed a newly published Walmart patent application (originally filed in October 2016) for an IoT platform to track the way products are used in shoppers’ homes. The system places automatic re-orders when the product is used up or needs to be replaced.

We’ve analyzed the 800+ published patents and applications Wal-Mart has made over the past few years — many of which focus on RFID — and this is the first application we’ve discovered that explicitly mentions the internet of things as a focus. Furthermore, the majority of Walmart’s patents deal with in-store or e-commerce operations; this is among the first to branch into shoppers’ homes.

The system is reminiscent of Amazon Dash — the connected buttons offered by Amazon that let users quickly re-order products. Launched over two years ago, Amazon Dash buttons now cover over 300 products. However, as we’ll describe below, Walmart’s system would require even less effort than Amazon’s. While Dash buttons still require users to press a physical button separate from the product (easy though that may be), Walmart aims to integrate IoT into the products themselves for automatic re-ordering with no user input at all.

This patent application, titled “Retail subscription in internet of things environment,” describes adding IoT tags to products based on Bluetooth, radio frequency, infrared, NFC, or other technology. The tag would monitor product usage, and automatically order refills/replacements when needed. The tags could also track expiration dates and product recalls. See a diagram from the patent below. 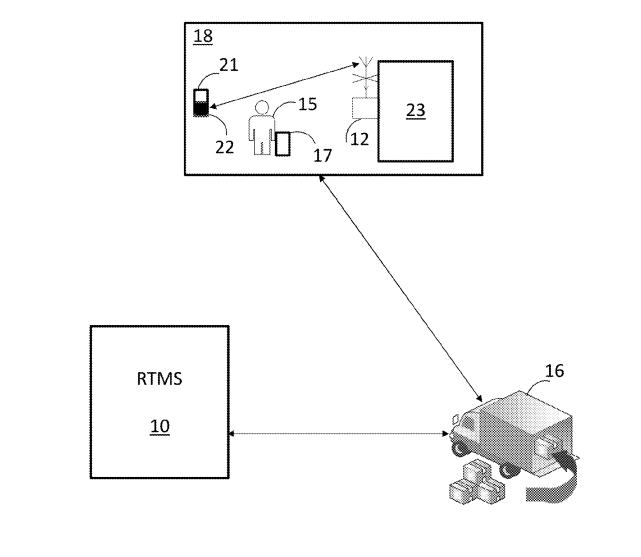 Along with driving purchases, this IoT system could also gather valuable consumer data for Walmart. The patent mentions that these tags could track how frequently the product is used, at what times of day, and where it’s kept in the house. This data could help develop personalized advertising, predictive demand management, and more detailed customer profiles for market segmentation, the patent explains.

Based on data from the tags, the patent says Walmart could also expand cross-selling — for example, if a shopper wears out his/her pair of sneakers more quickly than the average consumer, Walmart could recommend a more premium pair for the next purchase, or could classify this shopper as a frequent exerciser and focus personalized promotions on other workout gear.

Walmart has filed several other patents that could help to expand their grocery business, and this application could show a continued focus on connecting to shoppers’ kitchens. One of the inventors listed on the patent, Shekar Natarajan, is also an advisory board member for smart kitchen startup Innit (according to his LinkedIn). Innit has raised $43M from undisclosed investors to create a connected kitchen platform.

While this application shows new moves by Walmart into IoT, Walmart has previously applied for patents in other “frontier tech” fields, including drones and augmented reality. In 2013 (perhaps inspired by the launch of Google Glass), Walmart filed several patents for using augmented reality glasses to guide shoppers through the store and build augmented reality shopping lists. (CB Insights subscribers can click to access these patents searches directly.)

More recently in 2016, Walmart applied for a number of drone patents, including to use drones inside stores to ferry around products, and to monitor fresh produce using drones.

Want more patent data? Login to CB Insights or sign up for free below.