Q3’15 saw an increase in both deals and funding, reaching the second-highest funding tally of all-time at $166M, and just the second quarter ever of 20 or more deals.

Notable investments in Q3’15 include Jaunt’s $65M Series C from Google Ventures and Highland Capital, among others, as well as Avegant’s $24M Series B and NeoBear’s $19M Series A.

Those deals were just a few of the now more than 10 financings over $10M in the first three quarters of 2015. That said, most deals in AR and VR are still happening at the early stage. 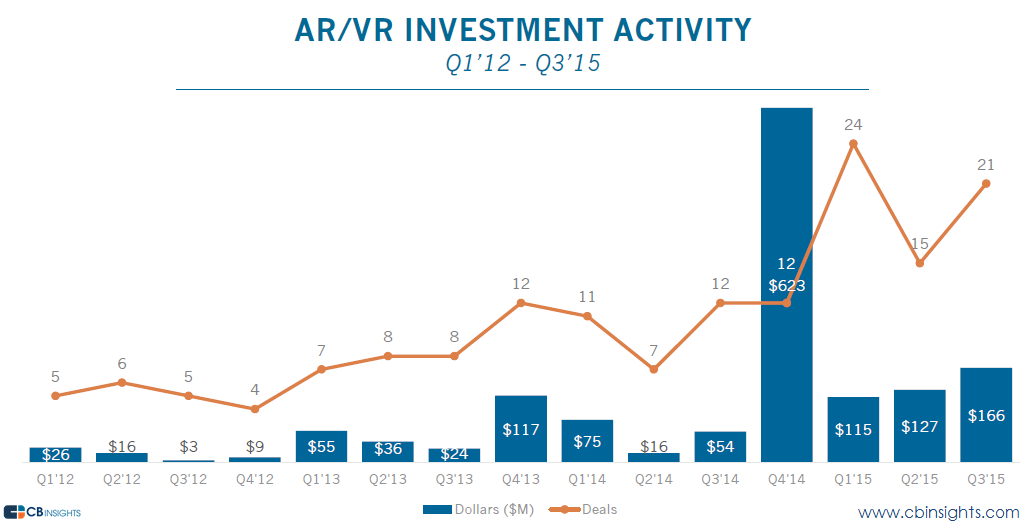 Rothenberg Ventures, Google Ventures, and Intel Capital have been the most active VCs in AR/VR since 2012 on a unique company basis. Rothenberg’s investments include AltspaceVR, Matterport, and EmergentVR, among others. Rothenberg Ventures also operates the River program, which originally was focused on AR/VR startups, but has now expanded to frontier tech overall.

Google Ventures has invested in the previously-mentioned Jaunt, while Intel Capital has made bets on Occipital and WorldViz, among others.

Want more data on AR/VR startups? Check out our Future of Frontier Tech webinar, login to CB Insights, or sign up for free below.