Research Brief
2447
Despite the dominance of gaming in media coverage of VR/AR, it's actually commercial and industrial applications that take the most deals.

The following is a guest post authored by Mark Linao (@MarkALinao) of Technicolor Ventures. Views are his own.

In the last two years, the virtual reality and augmented reality (VR/AR) industry has garnered attention from both investors and entrepreneurs. The number of VR/AR startups is increasing as venture capital financings continue to flood in, with investment reaching an all time high in 2015 of $658M in equity funding across 126 deals, according to CB Insights data. Even as VR/AR startups launch, larger corporates are developing VR/AR-related businesses, products, and investing in the space.

VR/AR has incredible potential to impact how people work, learn, play, exercise, communicate, transact, socialize, and consume content. In the past, television screens provided a platform for entertainment (shows, games, live entertainment). Later, the screen’s utility evolved with the use of personal computers in enterprise settings, increasing productivity. Mobile phones and tablets have followed suit.

VR/AR is a shift away from the screen. Rather than a screen, VR/AR provides an alternative environment, opening up new possibilities for interacting with media and enabling new forms of enterprise productivity. It is not unreasonable to think of the medium as the next computing platform. Just as the PC and mobile handset industries have created, altered, and disrupted markets, the VR/AR industry has potential to do so as well.

Using CB Insights along with data collected from meeting with VR/AR entrepreneurs, I have tracked roughly 290 companies that have in aggregate taken ~$2.3B in disclosed funding to date. The companies fit into one of six categories: commercial and industrial applications, content (which includes education and gaming), discovery and distribution, social, hardware, and infrastructure & tools. Many of the companies in this study fit across multiple categories but were categorized them on their main offerings. Also, each category has subcategories, which are explained below, after the deal breakdown: 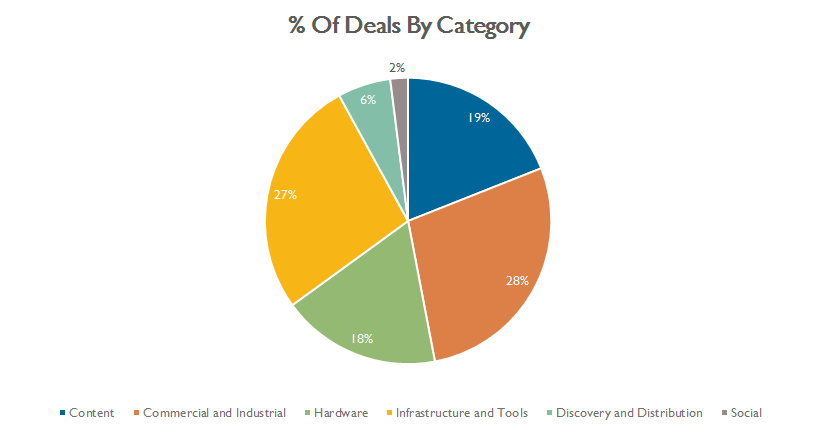 Pure content studios and agencies that create VR/AR content such as bonus movie or TV show content and journalistic content. This category also includes gaming and education. There are a number of companies that resemble production houses, advertising agencies or VR “work-for-hire” shops that produce VR/AR experiences for their clients. Some of these companies have started off as pure content creators and have later also become distributors.

These companies provide learning and education for people whether it is for the classroom, corporate learning management, or certifications. The education software market will see innovation through immersive learning enabled by VR/AR.

Gaming is of the more obvious and near-term use cases for VR/AR. Popular first person shooters such as Wolfenstein 3D, Halo, and massive multiplayer online role playing games (MMORPGs) such as Everquest and World of Warcraft were popular video games that immersed gamers in alternate visually appealing environments (for their time) and enabled interaction with bots and other players. New VR games coming out will advance that immersive experience, once confined by a screen.

These companies provide a destination to search and discover VR/AR content and apps. Some of them have created their own content to seed their platforms while some of the content companies have added discovery and distribution as part of their offering, as noted above.

Companies in this category allow for social, collaboration and communication within the medium. I’ve seen companies here provide virtual meeting environments and chat rooms where the user is represented in a virtual environment with an avatar.

This category captures a lot of different types of companies, but in essence these companies (aside from the headsets and mobile devices) provide the backbone, piping, delivery, building blocks, or creation software for VR/AR. I consider this category to encompass creation tools, dev tools, gaming engines, SDKs, gesture & motion tracking, haptic feedback technology, WebVR, encoding, and live-streaming tools. Companies in this space are solving the technology limitations for great VR/AR experiences (such as high quality delivery, VR/AR asset transfer, and the challenges of “presence”).

The top funded categories were hardware, followed by infrastructure and tools, commercial/industrial applications, and content. The least funded category is discovery and distribution. 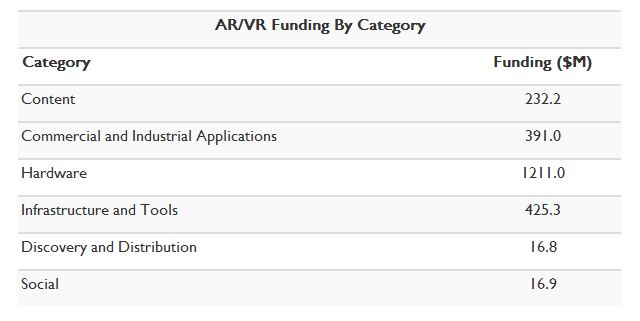 Drilling deeper into the funding data we observe:

With billions of dollars being poured into VR/AR, investment is expected to continue in 2016, especially with the release of consumer edition headsets and rapidly growing content libraries. Because the content category received significant investment when compared to discovery and distribution, it’s expected more companies and dollars will funnel into the latter category, while some content creators will add distribution to their existing businesses.

Commercial and industrial funding accounts for a decent share of the total funding, which gives me hope that VR/AR will eventually be adopted by the enterprise.

The infrastructure and tools category is likely to be an interesting space for venture investment since these businesses tend to be software-based and typically scalable in nature. These companies both benefit from and increase the demand for the medium. These software tools will be headset agnostic and allow developers and content creators to create and share assets, build VR/AR games and applications, and enable developers to work within VR/AR environments.

Larger corporates will continue to invest or partner with these newly formed companies. Due to the potential applications of VR/AR, corporations see the opportunity to enter newly formed markets while giving them insights and touchpoints that could help prevent obsolescence. As stated before, new computing platforms create new markets and alter and disrupt existing markets.

Mark currently works at Technicolor Ventures (@technicolorVC). Prior to joining Technicolor, he worked across several functions in engineering, manufacturing and production, supply chain, and logistics at Raytheon. At Amazon, Mark worked on the Last Mile By Amazon team helping define the decisioning algorithm for their newly launched in-house last mile delivery service. At the Rubicon Project (pre-IPO) he worked within the finance and operations team. Mark has a BS and MS from UCLA in Materials Science and Engineering. Mark also has an MBA from the University of Michigan Ross School of Business