The virtual and augmented reality space is hot, with more than 40 deals in 2015's first 6 months.

Virtual and augmented reality may not be widely adopted today, but investors are betting that it’s going to be big in the future. The space has seen its most active quarters in 2015, with more than 40 deals (and $240M invested) in this year’s first half. Q4’14 was by far the biggest quarter for funding in recent history, though the amount was driven almost entirely by a $542M Series B financing to Magic Leap, which included Google, Qualcomm Ventures, and KKR among other investors.

Q4’13 was also a strong quarter for investment, which included a $75M investment into Oculus VR — which later exited after being acquired by Facebook for $2B — and multiple rounds totaling $87M into healthcare AR startup LensAR. 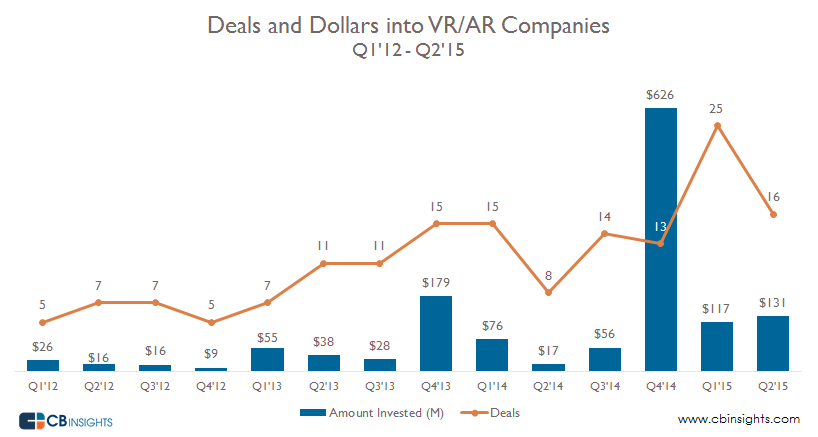 Magic Leap is by far the most well-funded company, with more than $590M of investment since its first funding at the start of 2014. LensAR is the only other company on this list with more than $100M of investment (though a large portion of LensAR’s funding was debt). The list of most well-funded startups include companies specialized in a broad range of VR/AR categories, including healthcare (LensAR), hardware support (Matterport, Movidius, Leap Motion, Meta), and mobile software (NantMobile).

Rothenberg Ventures, which has launched its VR-focused River Accelerator, is the most active VR investor since 2012 by far, making investments in more than 10 unique companies during this time. Google Ventures and Intel Capital were the most active corporates in the space, tying with Andreessen Horowitz and TechStars for second place.