We partnered with The New York Times to develop a data-driven ranking of the world's best venture capital partners. Here are detailed profiles of the top 20.

For the fourth consecutive year, we worked with The New York Times to identify and rank the top 100 venture capital professionals from around the globe.

We used CB Insights data gathered via our machine learning technology (dubbed The Cruncher) and from thousands of submissions we received from VC partners and firms via The Editor.

What is a Venture Capitalist?

A venture capitalist is an investor who provides financing to private companies that are experiencing, or have the potential for, high growth. In addition to funding, venture capitalists also serve as advisors to their portfolio companies and, if their stake in the company is large enough, can sit on its board of directors.

What do the top venture capitalists have in common?

This year, we’ve also analyzed the backgrounds of the top 20 venture partners to further understand their secrets to success. In doing so, we discovered the following:

Below are the detailed profiles of the Top 20 Venture Capital Partners. Scroll down for our Selection Methodology. 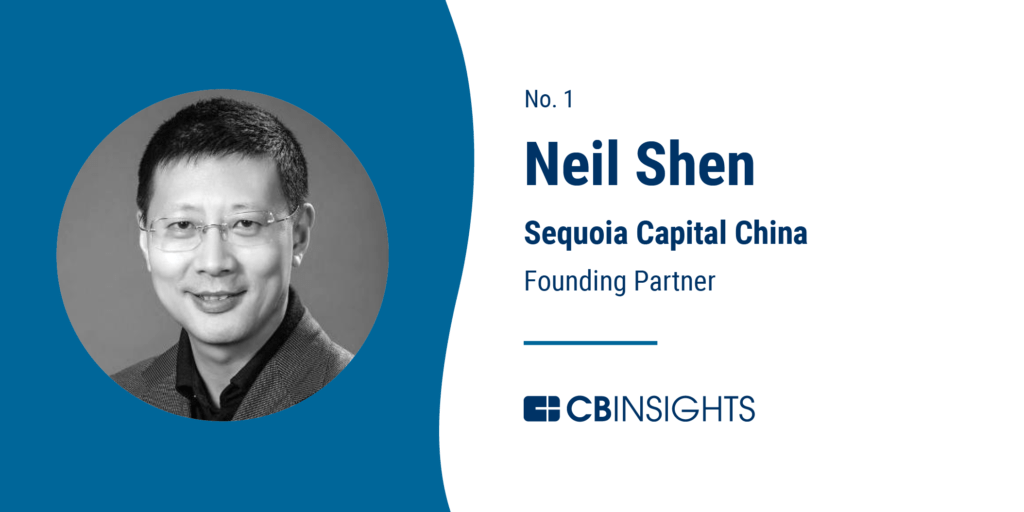 Neil (Nanpeng) Shen spent much of his early career in banking at firms like Deutsche Bank, Lehman Brothers, Citibank, and others. However, in 1999 he left the financial services industry to co-found the travel company Ctrip.com,L where he served as CFO. He also helped co-found the hotel chain Home Inns.

After his entrepreneurial endeavors, he co-founded Sequoia Capital China in 2005 with the help of US partners Michael Moritz and Doug Leone. Since then, Shen has built one of the most successful venture capital franchises in the world by focusing on trends specific to the Chinese region, rather than within the broader technology landscape. 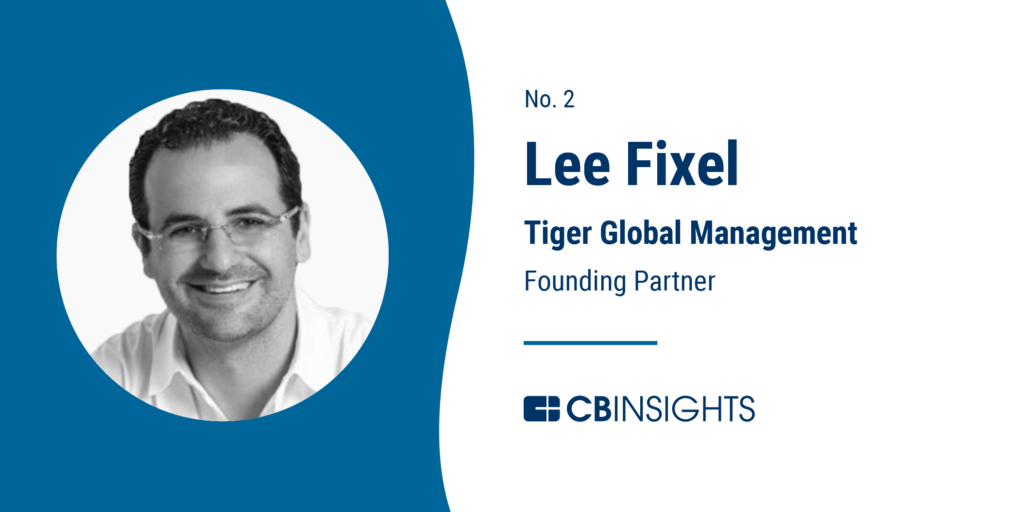 Since joining Tiger Global in March 2006, Lee Fixel quickly established a reputation for investing in internet and software companies in emerging markets.

Fixel’s investments span Souq (acquired by Amazon), MercadoLibre (often called the “eBay of Argentina”), and an early bet on Indian e-commerce with Flipkart (sold to Walmart for $16B). More recently, Lee has backed high-profile unicorns like Stripe, Peleton, and the now-public Spotify. 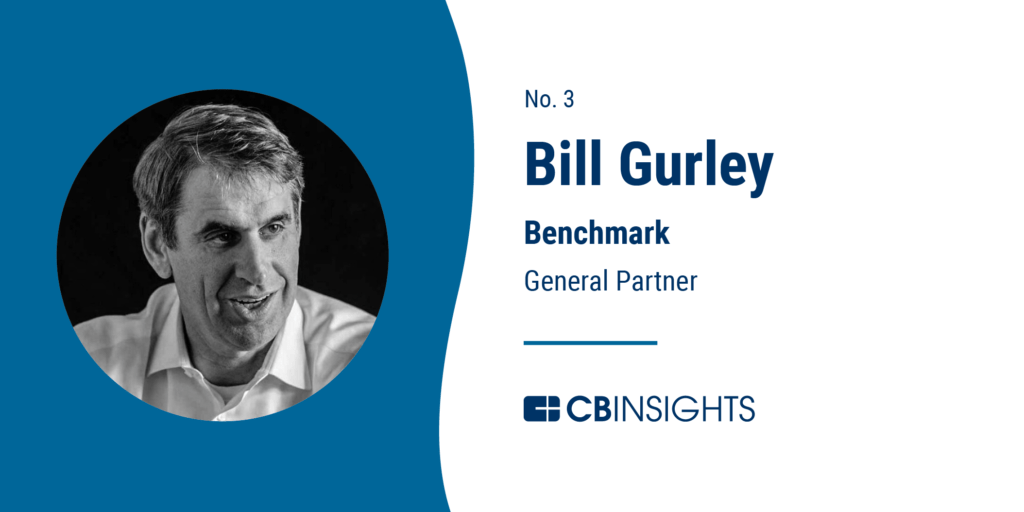 Bill Gurley started his career as an electrical engineer for Compaq Computers in 1989. He received his MBA in 1993 from UT Austin before joining Credit Suisse First Boston as an equity research analyst, where he focused on computer hardware and software.

After 3 years with Credit Suisse, Bill joined Deutsche Bank for a short time, and focused exclusively on internet companies. While at Deutsche Bank, he expanded his Silicon Valley network and joined Hummer Winblad Venture Partners in 1997. Shortly after, he joined the newly established Benchmark, where he has served as General Partner ever since. 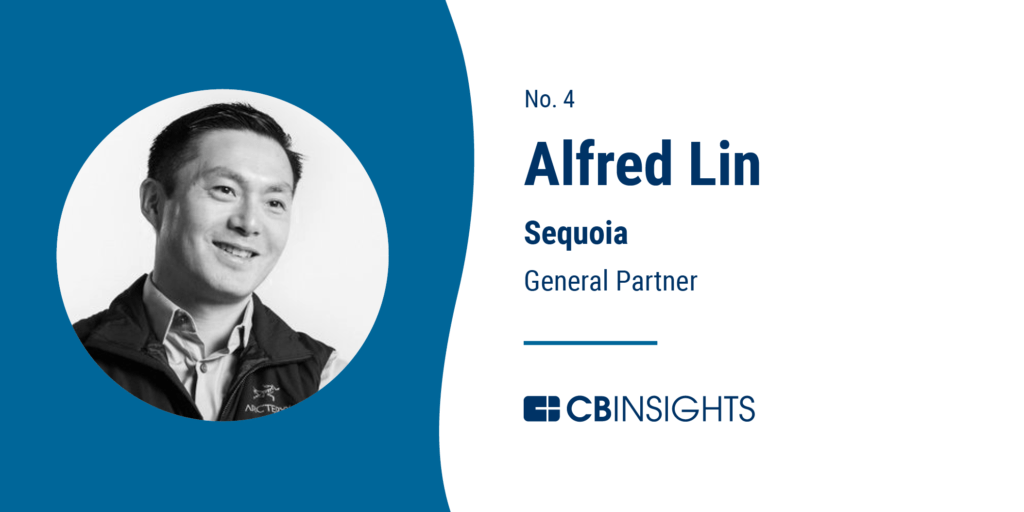 In 1996, Alfred Lin joined LinkExchange as the Vice President of Finance after completing his master’s degree in statistics. After two years with the company, it was acquired by Microsoft. Alfred went on to join Tellme Networks as the Vice President of Finance and Business Development. He left the company in 2005, and in 2007 it was also acquired by Microsoft.

After parting ways with Tellme, Alfred joined Zappos.com, where he assumed the roles of Chairman, CFO, and COO. He stayed with the company through its acquisition by Amazon in 2009 and joined Sequoia Capital as Partner in October 2010. 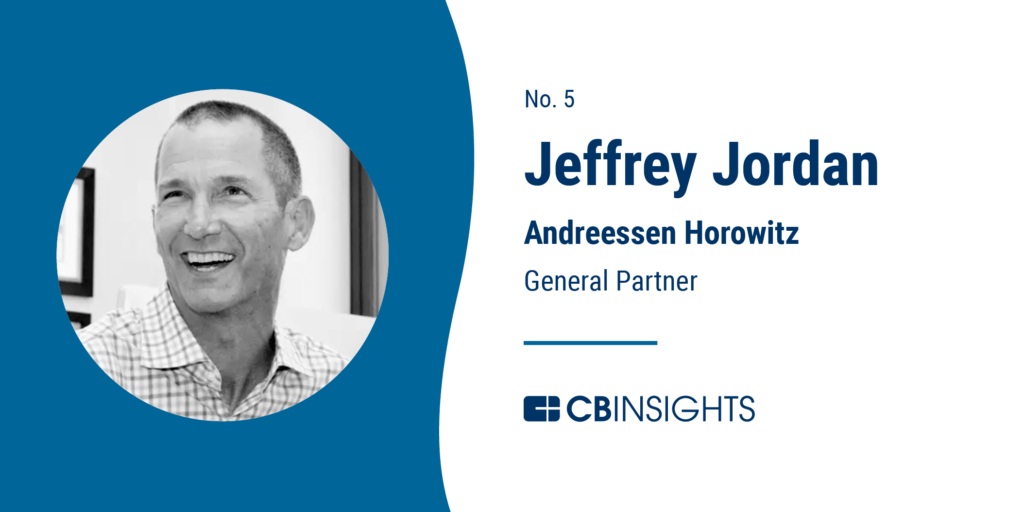 Jeff Jordan began his post-graduate career as a management consultant with The Boston Consulting Group. After 3 years with the firm, he joined The Walt Disney Company in a variety of roles and eventually became the Senior Vice President of Finance for The Disney Stores. In 1998 he became President and CEO of Reel.com, which operated independently after its acquisition by Hollywood Entertainment.

Shortly after, he joined eBay as Senior Vice President and General Manager. During his 5 years with the company, Jeff oversaw the acquisitions of Paypal and Half.com (#11 Josh Kopelman’s company). He then went on to serve as President of Paypal in 2004, before becoming President and CEO of OpenTable in 2007.

In 2011, Jeff parted ways with OpenTable after taking the company public in 2009. He joined Andreessen Horowitz as the firm’s fifth general partner, and has served in the role since. 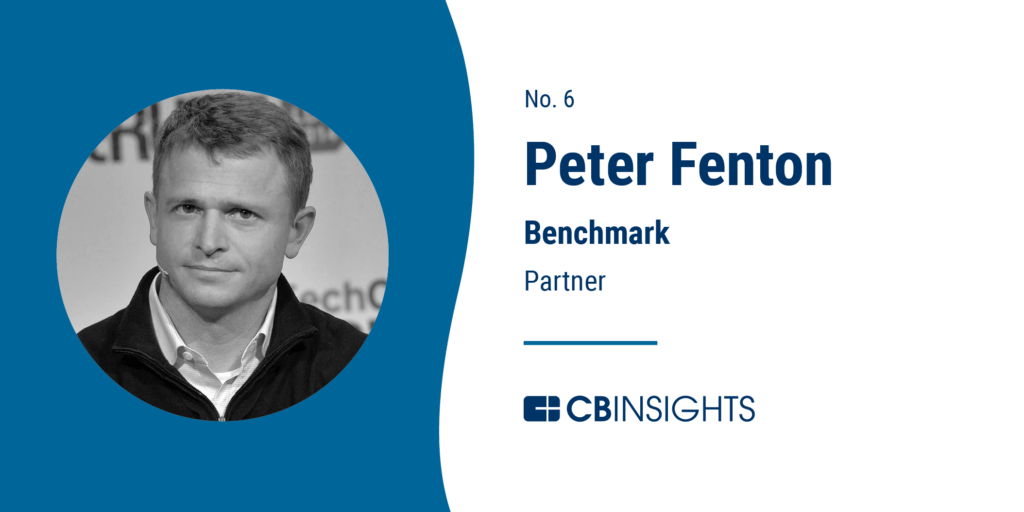 Peter Fenton began his career at video company Virage, where he worked as a general manager between 1996 and 1998. After completing his MBA, Peter joined Accel Partners, where he rose to become a Managing Partner. After a number of successful investments, Peter joined Benchmark in 2006, where he still invests today. 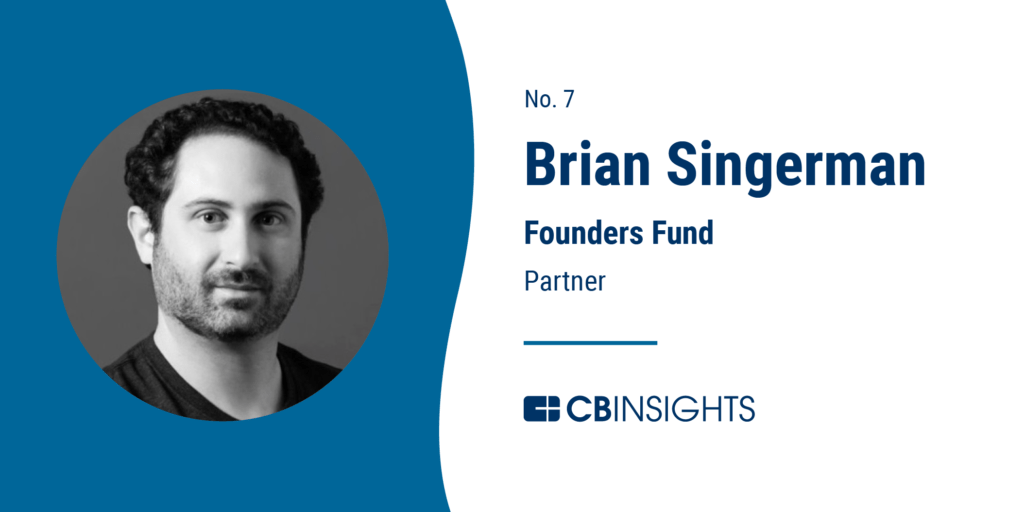 Brian Singerman started his career as a software engineer for virtual-world company There. After 4 years with the company, Brian joined Google as a software engineer and rose to become an engineering manager. Along the way, he started a small investment fund called XGYC (ex-Google, Y Combinator) to invest in early-stage startups.

After nearly four-and-a-half years with Google and some investment experience, Brian joined Founders Fund as a Principal in 2008.  In 2011, he was promoted to Partner. 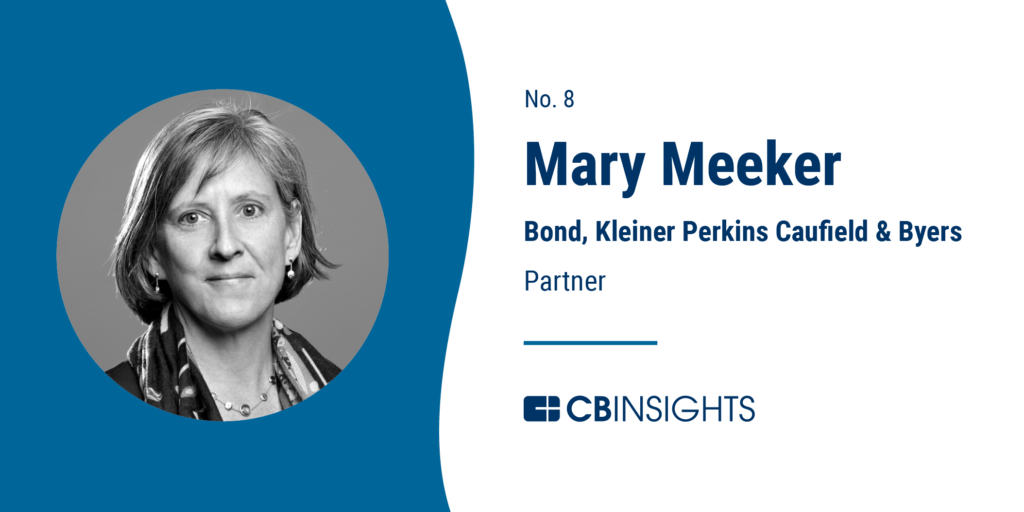 Mary Meeker began her career as a securities analyst in 1986. From 1991 to 2010, she worked at Morgan Stanley, where she served as a managing director and research analyst. She is best known for her annual Internet Trends Report, which is one of the most widely read technology reports each year.

After nearly 20 years with Morgan Stanley, Mary joined Kleiner Perkins Caufield & Byers in 2010, where she has sourced major exits including Twitter and Square. In early 2019, Mary announced she was leaving to start Bond, a new investment firm, along with several others from Kleiner Perkins. 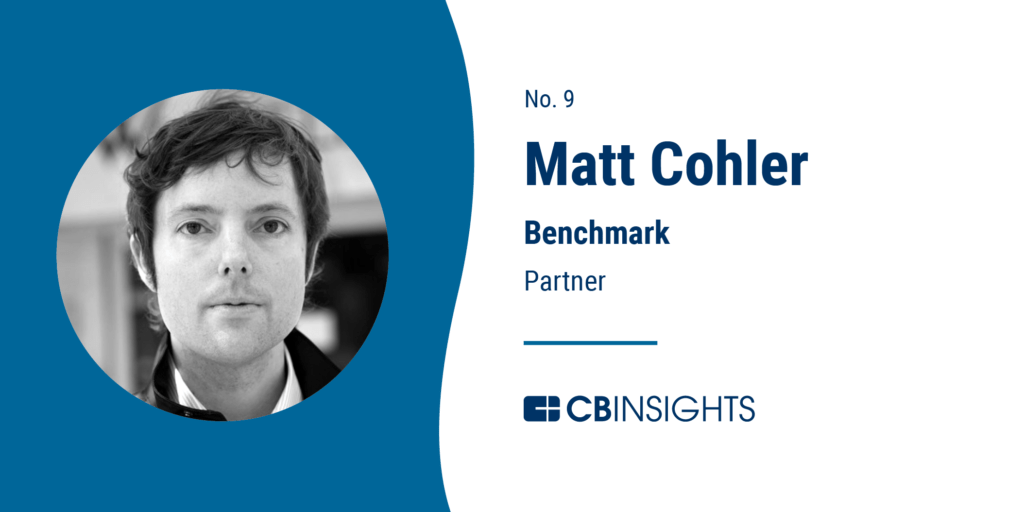 Matt Cohler joined Benchmark in 2008, after working previously at McKinsey, Facebook, and LinkedIn. As one of Facebook’s first five employees, Cohler was an integral part of Instagram’s sale to Facebook in 2012.

At Benchmark, Cohler has largely focused on interntet companies, as evidenced by investments in Dropbox, Quora, Asana, Tinder, and 1stdibs.

Cohler also sits on the boards for companies like Uber, Greenhouse, and Domo, among others. 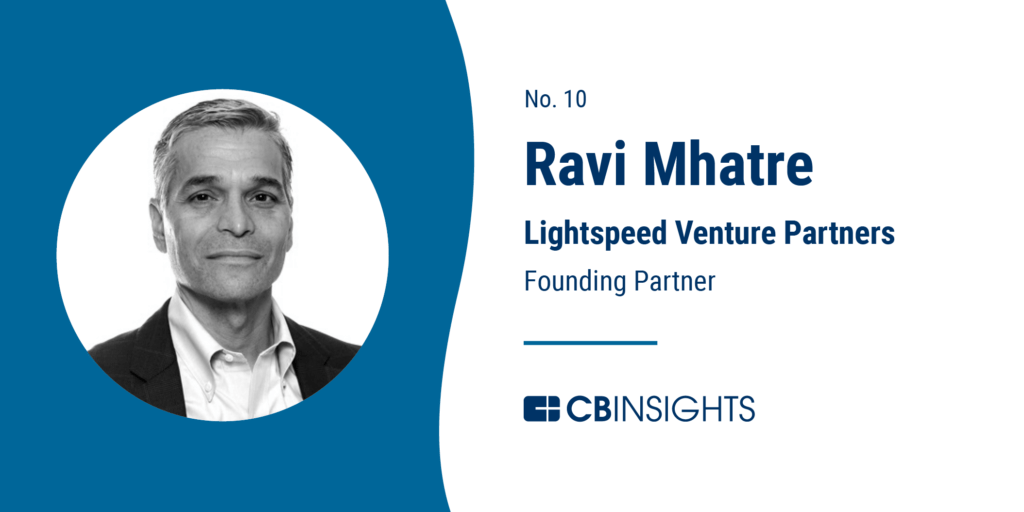 Ravi Mhatre started his career as a management consultant at Booz Allen Hamilton in 1989. After completing his master’s degree, Ravi then joined Silicon Graphics as a Product Manager in 1993.

Just over two years later, he jumped into the venture capital world and joined Bessemer Venture Partners as an investor. In 1999, Ravi went off the start Lightspeed Venture Partners with 3 other colleagues. He still serves as a Founding Partner and Managing Director nearly 20 years later. 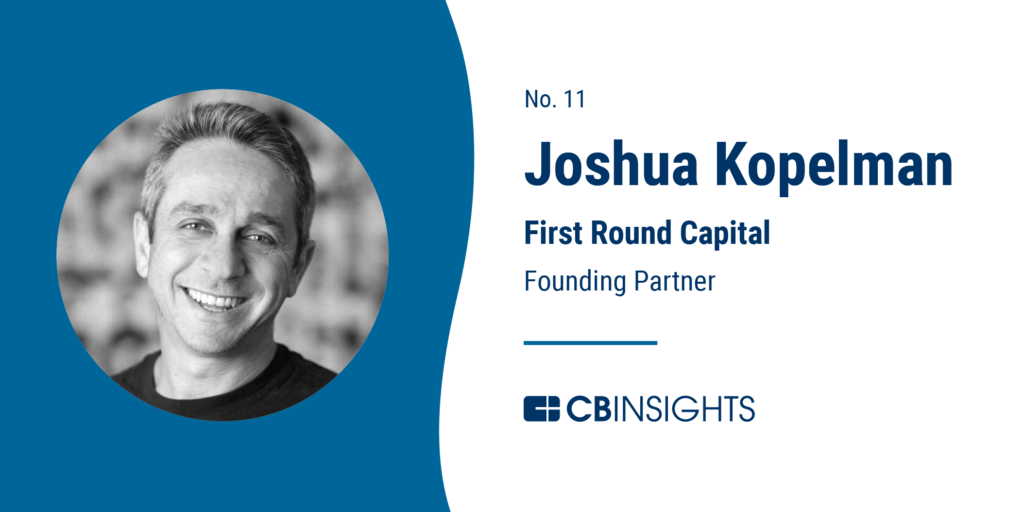 Josh Kopelman is one of the few serial entrepreneurs on our list of Top 20 Venture Capital Partners.

While a student at The Wharton School of the University of Pennsylvania, he began information services company Infonautics, which went public in 1996 (and was later acquired). In 1999, Kopelman parted ways with Infonautics to start person-to-person marketplace Half.com. After a short and successful year, Half.com was acquired by eBay in 2000. Josh continued to run Half.com within eBay for approximately 3 years before starting anti-spam company TurnTide, which was acquired by Symantec just six months after its creation.

In 2004, Josh founded First Round Capital, where he serves as General Partner. 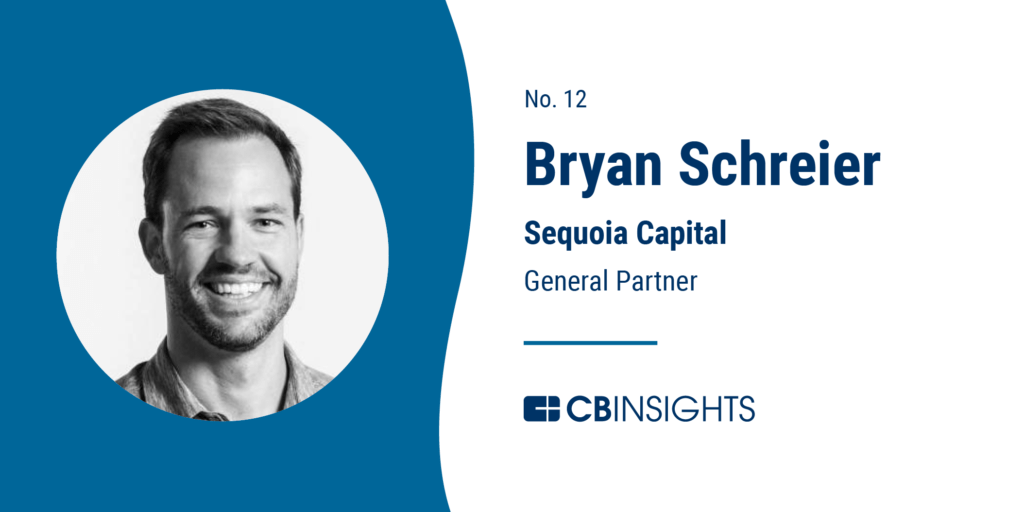 Bryan Schreier joined Sequoia Capital as a partner in 2008, and worked on two major venture exits last year: the now-public Dropbox and the recently-acquired Qualtrics. Other investments have included Thumbtack and Trulia.

Prior to entering VC, Bryan launched Google‘s European headquarters and was an Interim President of Sales in China. Before Google, he worked in tech investment banking at Morgan Stanley. 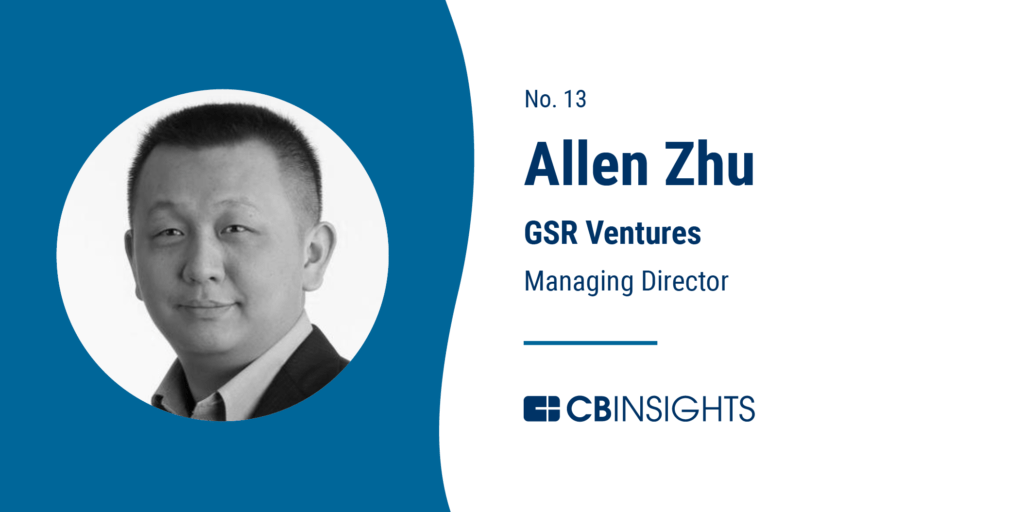 Allen Zhu is a Managing Director with GSR Ventures, where he focuses on investments in early-stage companies in the internet, mobile, and new media sectors. Prior to GSR Ventures, he co-founded eBaoTech, a leading provider of insurance core back-end systems. 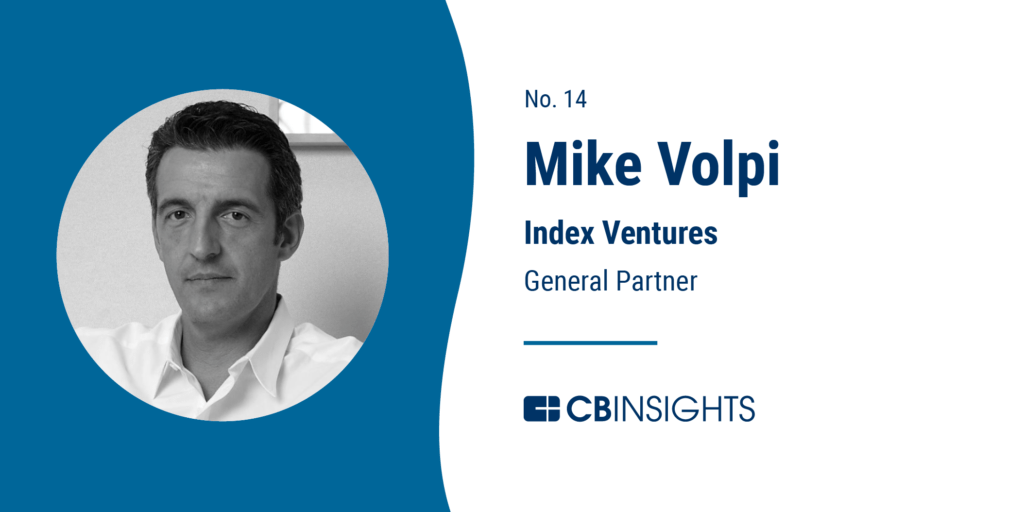 Mike Volpi began his career at Hewlett Packard, where he worked in both engineering and marketing. After receiving his MBA, he joined Cisco, where he held a number of executive positions including Chief Strategy Officer and SVP/GM of the routing business. 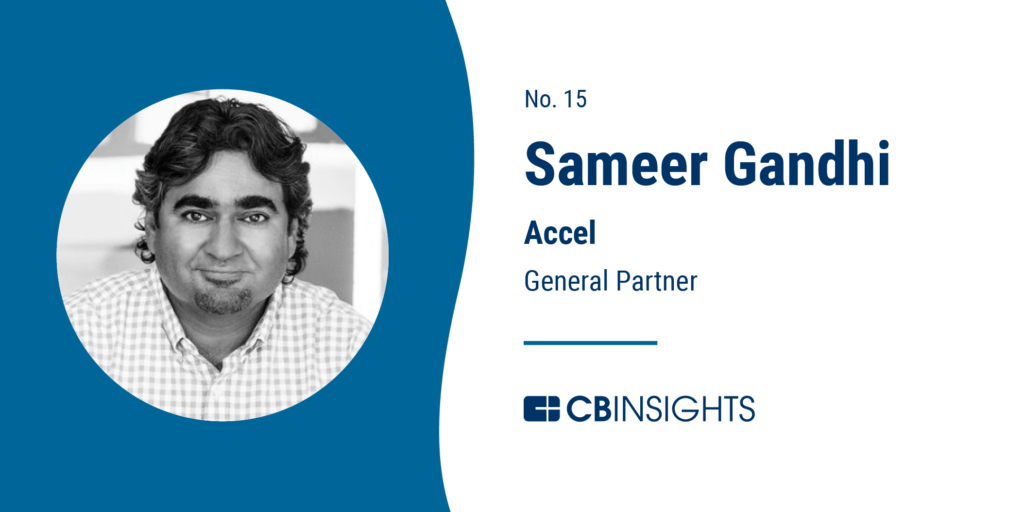 Sameer Gandhi joined Accel Partners in 2008 and focuses on consumer, software, and services companies. Prior to joining Accel, Sameer was a partner at Sequoia Capital and led investments in companies like Barracuda Networks, Dropbox (initial seed), Gracenote, Trulia, and Sourcefire. 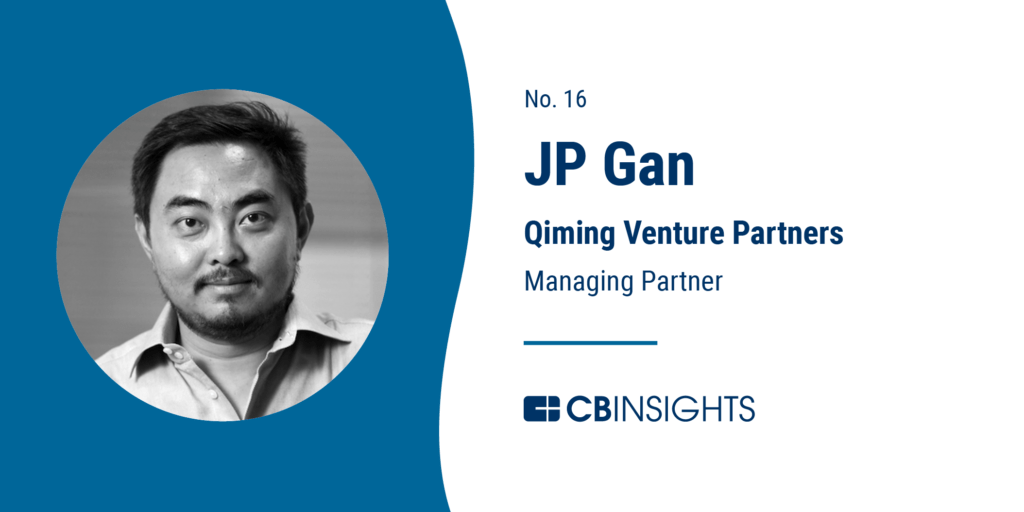 JP Gan has been a Managing Partner and investment committee member at Qiming Venture Partners since 2006. He has over twenty years of experience in investment and finance. JP’s investments include Ctrip,  Dianping, and Jiayuan, among others.

Gan started his venture capital career in 2000 at the Carlyle Group, where he was a founding member of the firm’s Asian venture fund in Hong Kong. 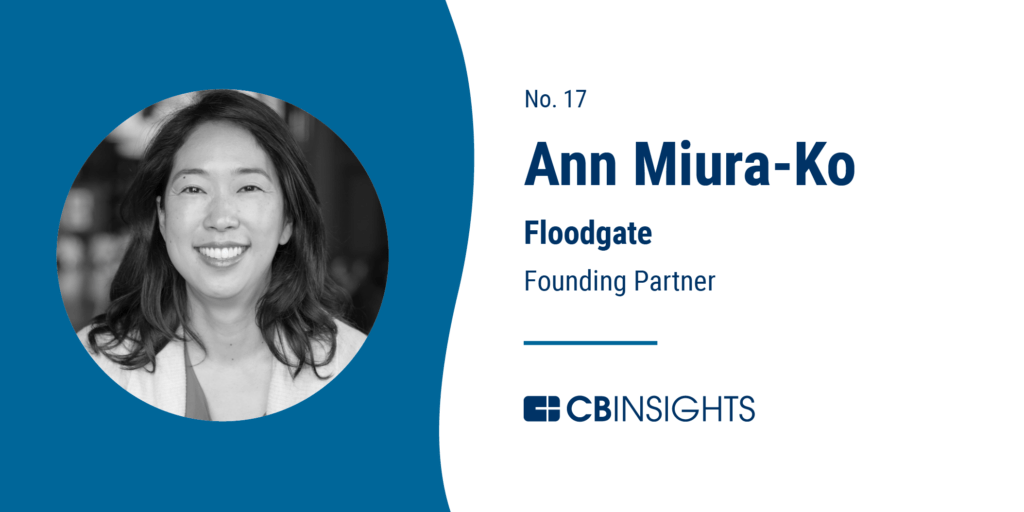 Ann Miura-Ko is a founding partner at Floodgate, a seed-stage VC firm. She was one of the first investors in companies including Lyft and TaskRabbit, with additional early investments in Ayasdi, Xamarin, and Modcloth, among others. Prior to Floodgate, Ann worked at Charles River Ventures and McKinsey and Company. 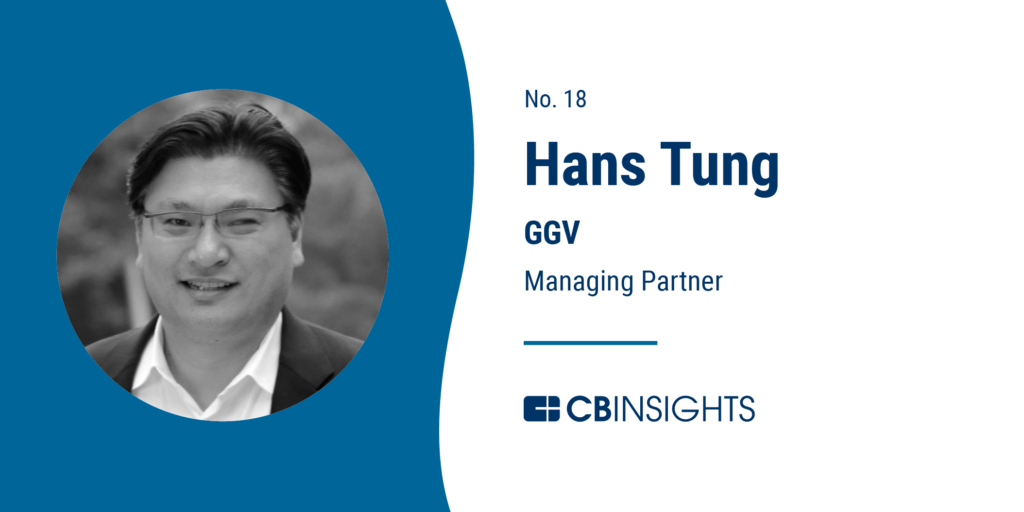 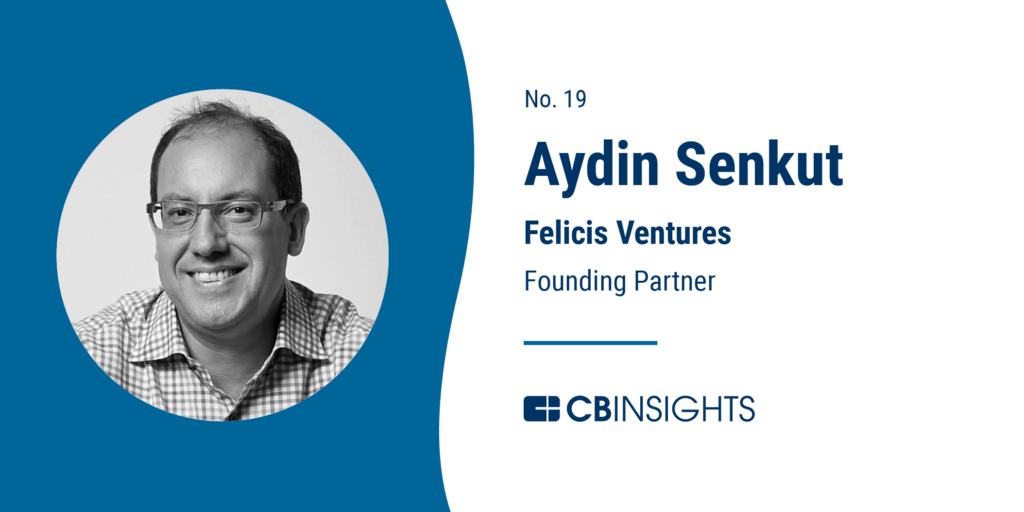 In 1996, Aydin Senkut began working at Silicon Graphics as a business development manager. He later became a product manager at the company before joining Google in 1999. At Google, he held a number of roles, including product manager, sales manager of strategic accounts, and to senior manager of websearch & syndication

In 2005, Aydin left Google to start Felicis Ventures, where he is a Managing Partner. 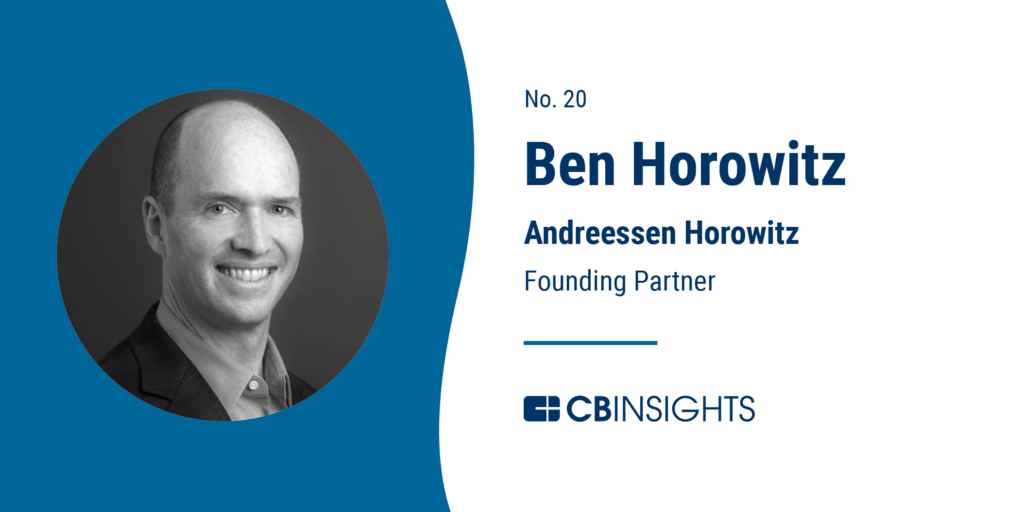 Ben Horowitz is a founding partner at Andreessen Horowitz. Before founding the firm, Ben was an angel investor and the co-founder of Opsware (formerly Loudcloud), which was acquired by HP in 2007. Earlier, he was vice president and general manager of AOL’s e-commerce platform division and a vice president at Netscape Communications. He also served as vice president of Netscape’s widely acclaimed Directory and Security product line.