Research Brief
1674
VCs now participate in less than half of all tech deals in the US. VC contribution to tech funding has also declined over time.

Our 2014 US Venture Capital Year in Review showed that overall VC activity reached $47.3B across 3617 deals in 2014.  It was a big year for venture – the highest since 2000. Of total US VC funding, the majority of it went to tech companies. In fact, $33.4B in funding and 2859 deals were to tech companies representing 71% and 79%, respectively, of total venture activity in 2014. Venture capital activity includes pure-play financial VCs as well as corporate venture investors.

However, just reporting on VC investment into tech doesn’t provide a complete picture into the tech investment landscape since VCs are not the only ones investing in tech.

Since CB Insights tracks more than VC, we wanted to see how material the impact of these other investors was on total US tech funding and deals. (Think angels, accelerators, corporate minority deals, hedge fund, private equity, mutual fund, sovereigns, investment banks, etc) 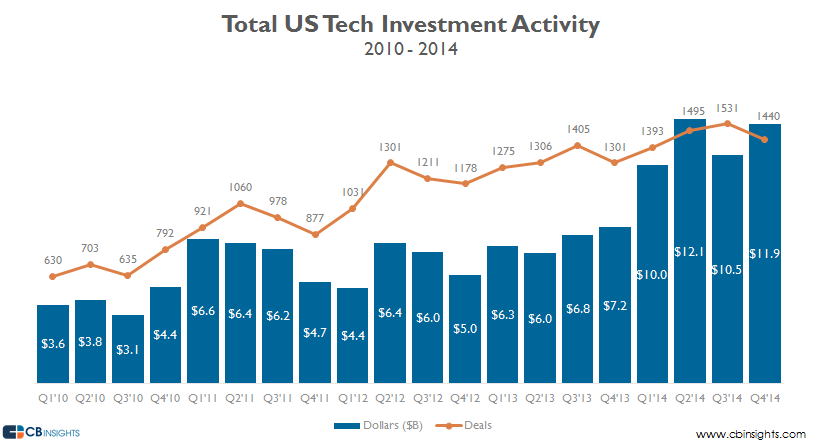 The contribution from VCs has been declining

While total tech funding continues to reach multi-year highs, 2014 actually saw the lowest level of VC involvement on a dollars basis with 25% of funding ($11.1B/$44.5B) of tech funding coming from deals not involving VCs. The share of VC funding in tech has now fallen for three straight years, and is 5% off of 2010’s five-year high of 80%. 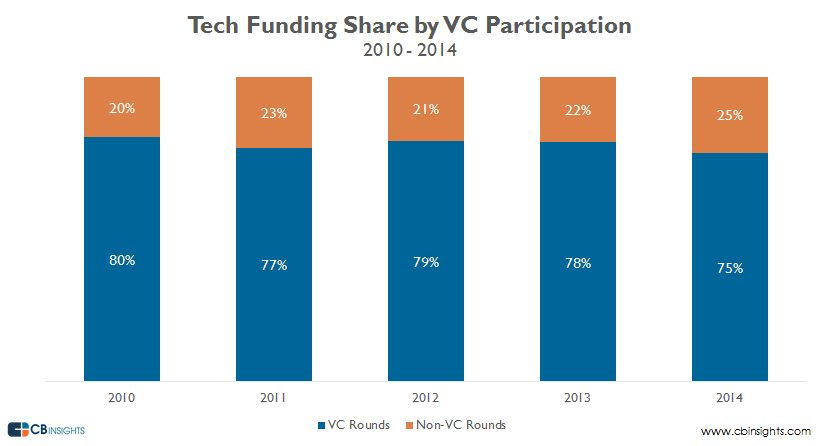 On a deals basis, there were 5859 tech investment deals in the US last year. VC investors participated in 49% of all tech deals – or in just under 1 of every 2 deals. This is down sharply from 2010, which saw 61% of all tech deals involving a VC. The rise of angel investors, larger institutional players, and non-traditional tech investors is one key driver of this downward trend. 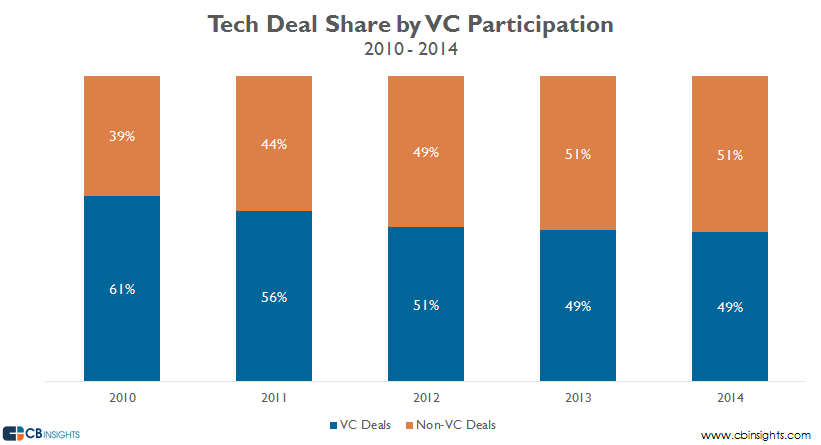 Through February 2015, US tech investments have already reached $8.7B raised across 853 deals driven by multiple $100M+ deals to the likes of the insatiable Uber as well as Lynda.com among others. With a month left in the quarter and the continued boom in seed investing, tech is on pace to reach a new quarterly high for dollars and deals in Q1’15.

If 2015 isanother record year for tech investment, will VCs continue to see their share of deals and funding decline?

Want to track every tech financing – from early to late stage by angels, accelerators, VCs, growth equity and private equity investors? We track 50 to 80% more financings than any other source in the market.

Login to CB Insights or sign up for free below.