Research Brief
1420
Did Alibaba's massive public offering slow the IPO market? It may have, but VC-backed tech IPOs thus far in 2014 are on pace to top 2013's totals.

After multiple delays, Alibaba went public becoming the biggest US tech IPO ever. Dan Primack was one of the many that heard rumblings about the Chinese tech titan’s effect on the IPO market:

Beginning to see a bunch of IPOs ramp up, now that it looks like Alibaba pricing date is firm.

Using CB Insights data, we analyzed the first three quarters of 2014’s VC-backed tech IPO figures. Overall, 2014 is ahead of 2013’s Q1-Q3 pace, with Silicon Valley, NY, MA, SoCal, and Texas each sporting multiple IPOs. However, Alibaba may have had an effect on timing, as there was only 1 VC-backed tech IPO in Q3’14 for a U.S.-headquartered company (TubeMogul).

With Massachusetts having two potentially high-profile tech IPOs in Q4 with Hubspot and Wayfair, it looks like Q4 will see an uptick in deal activity.  However, with Box delaying its IPO to 2015 given “market conditions” and the fact that it’s easier to raise at a billion dollar financing than to IPO at a billion dollar valuation, there still is a great deal of uncertainty about how robust the IPO market will be through the end of 2014. 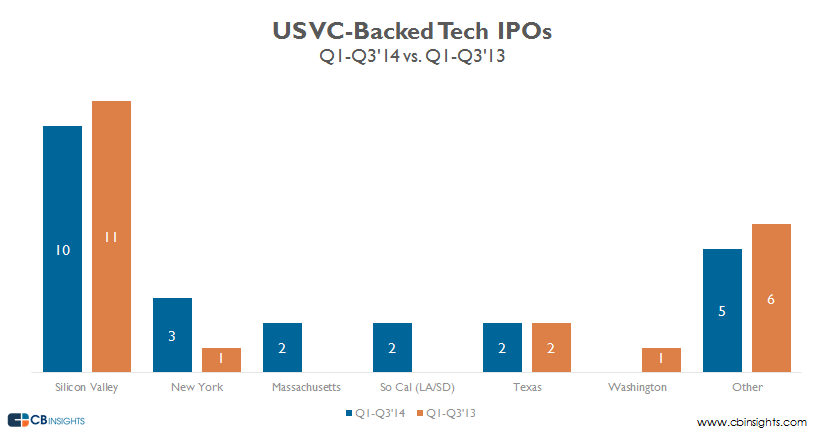 Note: Data in this brief includes VC-backed companies that are headquartered in the U.S.