Research Brief
1598
VC deals to mobile companies hit a record in 2014. We break down the top sub-industries, deals and geographies in venture's hottest sector.

2014 saw $7.8 billion invested by venture capitalists into mobile companies. The funding spiked in Q4 2014 when VC funding to the mobile sector topped $3B behind mega-deals to companies including Uber and Snapchat.

Using CB Insights data, here’s a breakdown of 2014’s mobile investment trends including the top industries and stages for deal and funding activity. The data below.

VC deals in the mobile space concentrated heavily among a few geographies in 2014. Of note, the trifecta of California, New York and Massachusetts increased their mobile deal share to 76% in 2014, up from 71% in 2013.

On the funding front, California once again sat atop mobile venture capital funding taking 79% of VC investment dollars. New York and Massachusetts were the only other two states with funding share greater than 1%.

Early stage investments at the Seed and Series A stage made up 70% of VC deals in the mobile sector as investors increasingly bet on the promise of mobile. 2014 saw mobile seed deal share rise to 41%, from 37% in 2013, in line with seed deals climbing across the board. Late-stage deal activity remained largely range-bound on a year-over-year basis.

Meanwhile, mega-deals in mobile at the late-stage (Series D+) included some eye-popping checks and commanded 58% of funding share in the mobile space.

VCs chased deals in a wide range of mobile sub-industries in 2014, but none more than ‘Health & Wellness’, which took 8% of all deals in the mobile sector. ‘Social’, ‘CRM’, and ‘Conferencing & Communication’ followed.

With the rise of Uber and Lyft in 2014, ‘Travel’ dominated funding share in Mobile, accounting for 35% of all VC dollars to Mobile startups. ‘Photo’ garnered the second most funding largely due to Snapchat’s $485.6M Series D at 7%. 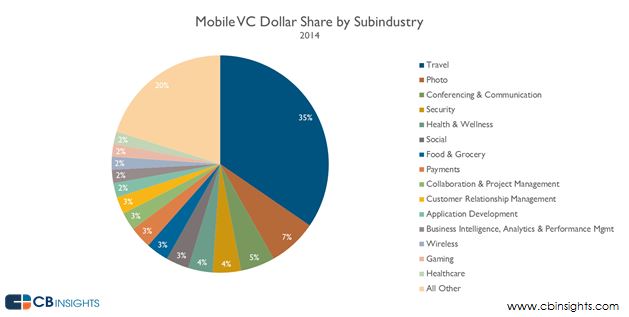 San Francisco and New York top the list of U.S. cities for Mobile & Telecom venture capital deals. Uber’s Series D and E rounds which cumulatively raised $2.4B were the largest mobile VC deals of 2014, while Snapchat closed the third-largest mobile deal right at the close of 2014.

Looking for more mobile funding and exit data? Sign up for the CB Insights Venture Capital Database. Sign up free below.