Research Brief
1788
The number of venture-capital deals has declined for three straight quarters.

Venture-capital activity is continuing to slow down, based on data from our Q1’15 VC report. The number of VC deals hit a low in Q1’15, marking the third straight quarter of deal decline, dropping to just above 805 deals, from 943 the previous quarter. Q1’15 also saw an 18% drop in funding from the previous quarter, from $13.7B to $11.3B but it was also the fifth straight quarter to break $10B in investment. 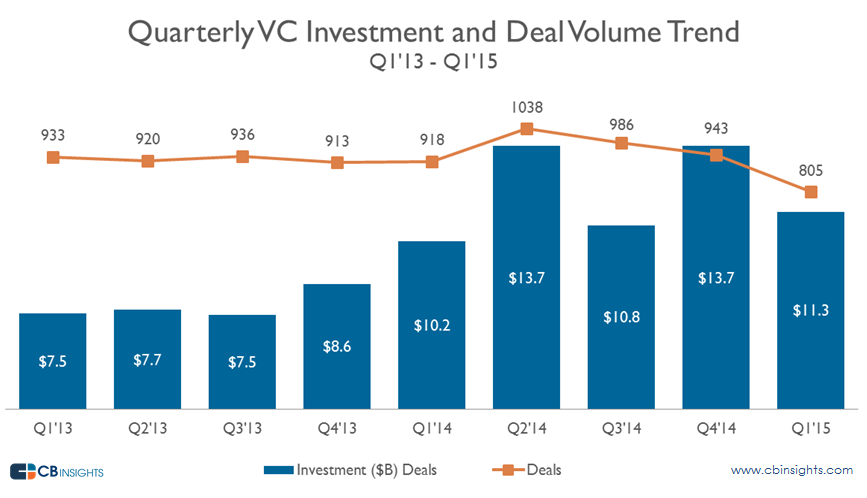 Though VC deals might be decreasing, this doesn’t tell the full story. When we look at the investment into VC-backed companies (the companies that at some point have received VC-firm funding), Q1’15 reached a new high in funding of $17.7B, a growth of 13% from the previous quarter and the second straight quarter of funding growth. That’s because late-stage investors like mutual funds, sovereign wealth funds, private equity, and corporations etc. are dumping more dollars into VC-backed companies. Many of those investments are concentrated in individual mega-deals. Even though more dollars are going into these companies, the overall trend in the number of deals still points downward.

Below is further evidence of how late-stage investors are driving funding trends. VCs are slowly shifting investments away from late-stage deals, as deeper-pocketed investors are ready to provide more funding. Late-stage investments are accounting for a lower share of overall VC investments. The dollar-share for late-stage VC deals hit a low of 40% in Q1’15, with Series E+ shrinking from 30% in Q4’14 to 22% in Q1’15. Megadeals in Uber, Snapchat, and Lyft all lacked VC participation, further driving this trend. 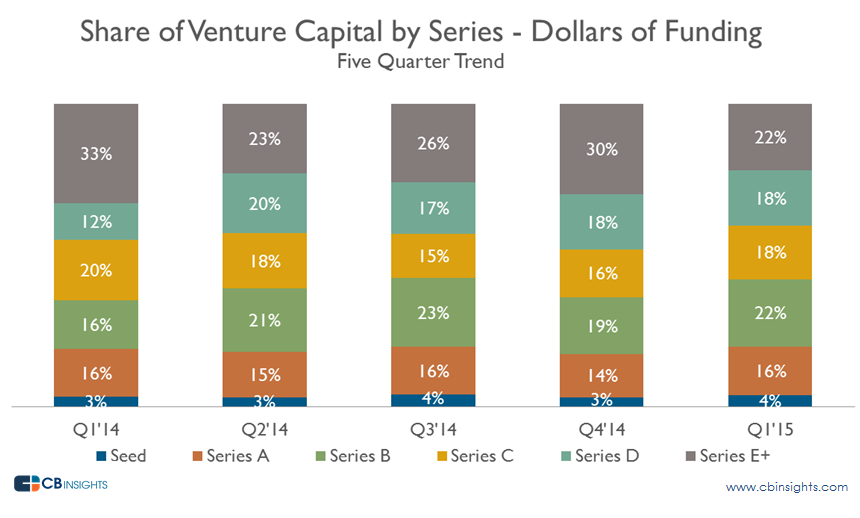 Data from comes from our Q1’15 VC report, which can be downloaded here.

Want more VC trend information? Sign up for our venture capital database below.