Tech investors migrating out of tech? Au contraire. In 2011, tech represented only 64% of VC deals, whereas this year the sector took 76% of deals.

With tech IPOs remaining low — there were only 6 in the first half of the year in the US — chatter has grown that VCs will surely begin to look to other sectors in pursuit of better outcomes.

At the same time, the spotlight has intensified on VC involvement in home-runs in healthcare such as cancer therapeutics startup Stemcentrx — whose VC backers saw one of the largest M&A deals of all time.

There have also been prominent investments by VCs in well-known companies outside of tech such as coffee company Blue Bottle, mattress company Casper, and ice cream maker Ample Hills.

Meanwhile, entrepreneur Elad Gil recently wrote a blog post, “End of Cycle?” expressing worry that tech investors are migrating into other industries that they may not know as well.

“Many tech investors are shifting from investing in bits-driven business (software) into atoms driven businesses (anything you need to manufacture). I know tech investors now looking heavily at food, traditional biotech, hardware, pre-fabricated housing, and numerous other areas.”

We used the CB Insights database to see whether VC investors are indeed participating in fewer tech deals — which includes internet, mobile and telecommunications, software, computer hardware, and electronics companies — versus non-tech investments.

Interestingly, the data show tech is still on top. While anecdotally it may be true that some notable VC dealmaking is happening in non-tech and non-healthcare areas, more broadly the opposite is the case. In fact, the proportion of VC deals to tech companies has consistently ramped up over the past 5 years. In 2011 tech represented only 64% of VC deals, whereas in 2016 through the first six and a half months, it makes up 76% of deals. 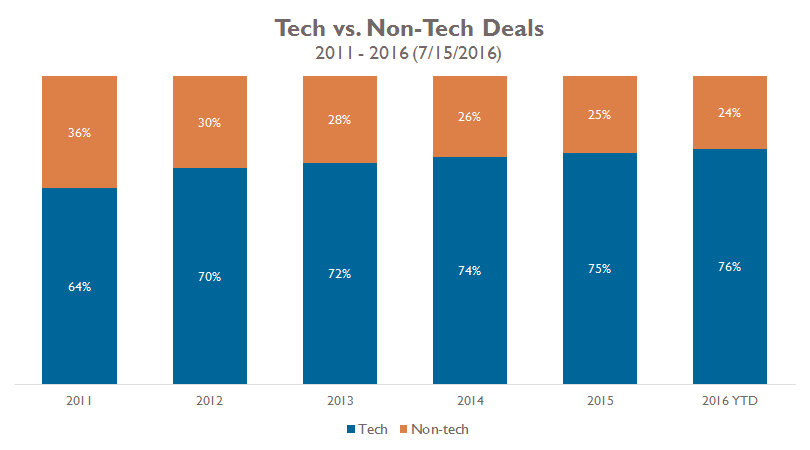 Among the smart money investors — more below on how we selected this list of top 24 investors — the above trend was actually reversed for several years. From 2011 through 2013, smart money VCs participated in proportionally fewer tech deals, with tech going from accounting for 72% of deals down to 66%. In 2015, that figure moved up to 68%. And so far in 2016, tech investment has bounced back and reached its highest level yet, now comprising 75% of smart money deals, on par with the broad trend (at 76% of deals). 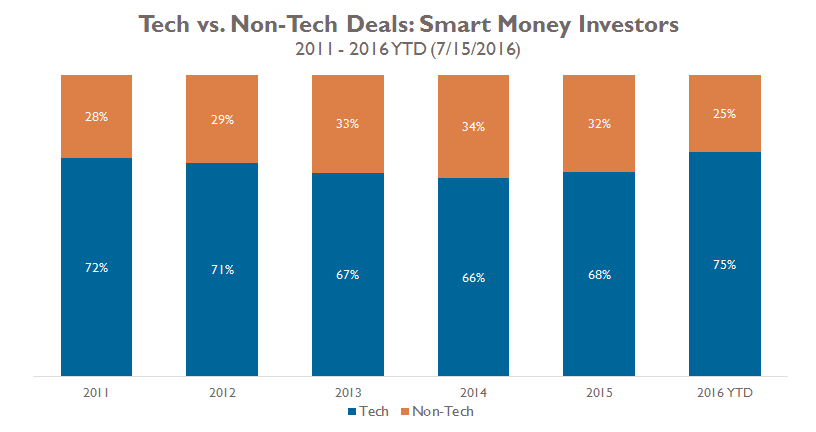