Research Brief
1690
Outside of Silicon Valley, New York and Massachusetts, where are venture capitalists looking for the next big thing?

Where are VCs unicorn hunting outside of California, NY and Massachusetts? It looks like Ohio.

As we’d previously detailed, there a number of budding startup ecosystems and so we used CB Insights data to analyze which states have had the greatest increase in active investors financing their companies.

Ohio saw a more than 550% increase in the number of active investors financing companies within the state. Some of the participating VCs that invested in Ohio companies in 2014 include Drive Capital, Progress Ventures, and HLM Venture Partners.

The state had less than 10 active venture investors in 2009 but saw more than 40 different VCs invest in 2014. Utah and DC have also seen an explosion in investors seeing massive growth in the number of venture investors doing deals over the last five years. Utah startups, as we already have highlighted, has a number of very well-financed technology companies. Texas and Washington, which had the most investors outside of major markets in 2009, still grew their number of unique investors by 66% in the 5 year span.

Below are the states that saw the highest level of VC investor growth between 2009 and 2014. 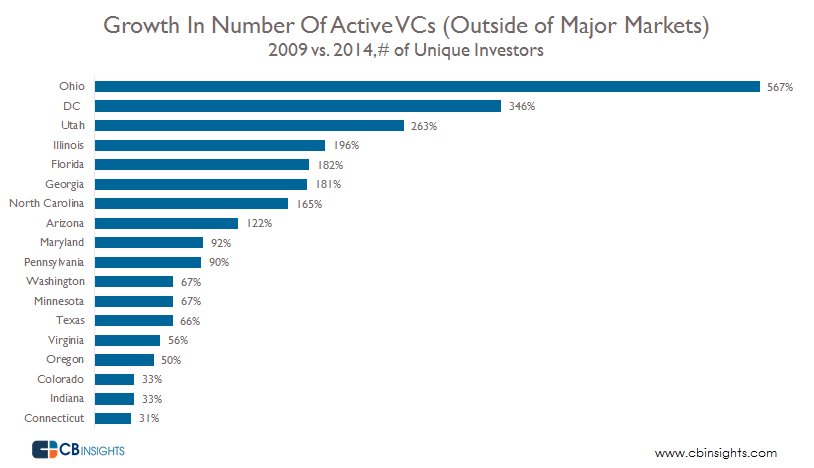 *Analysis included states with at least 5 venture investors in 2009

Want to track private company financings throughout the US? Login or signup for a free account below.