Research Brief
2310
Old Navy, Office Depot, and Beats took a shorter time to hit $1B in sales than tech's biggest names like Facebook and Salesforce.

Venture investment skews heavily towards technology. Internet and mobile accounted for 67% of venture capital invested in Q3’15, according to our Venture Pulse: Global VC Report. And many VCs would be quick to cite strong network effects and near-zero marginal costs as to why they’d invest in software and internet companies over a consumer brand.

But are these tech companies really a better early-stage investment than a future consumer giant like Tory Burch or Lululemon?

Here are main takeaways from the 54-slide deck:

In certain respects, Gur and Heiman argue, consumer products have better business fundamentals than some of the most high-flying tech companies.

They first point out that some consumer categories have yielded as many or more billion dollar-valuation companies as the big tech verticals. While it’s not shocking that consumer products has its share of unicorns, conventional wisdom often holds that they simply can’t scale like software can.

For that reason, brands like Old Navy, Office Depot, and Beats by Dre aren’t thought to be in the same league as “blitzscaling” tech startups. But in fact all of those companies took fewer years to hit $1B in sales than tech’s biggest success stories including Facebook, Twitter, and Salesforce.

Next, it turns out that consumer companies are pretty competitive with tech companies, especially when it comes to EBIT margins. For reference, Google has a 26% EBIT margin, whereas Dunkin Donuts and Applebees have margins of 43% and 33%, respectively. (It should be noted that these margins are a result of their franchise business models, but that further demonstrates the power of a consumer brand.)

Lastly, says CRV, today’s consumer product IPO class has built larger businesses per dollar of VC investment than their technology counterparts. A slide that was made using CB Insights data supports this idea. Consumer companies like Krave beef jerky and Dollar Shave Club built bigger businesses relative to their startup capital than database companies like MongoDB, though a software company (Zendesk) was the most efficient from a revenue/capital ratio perspective. 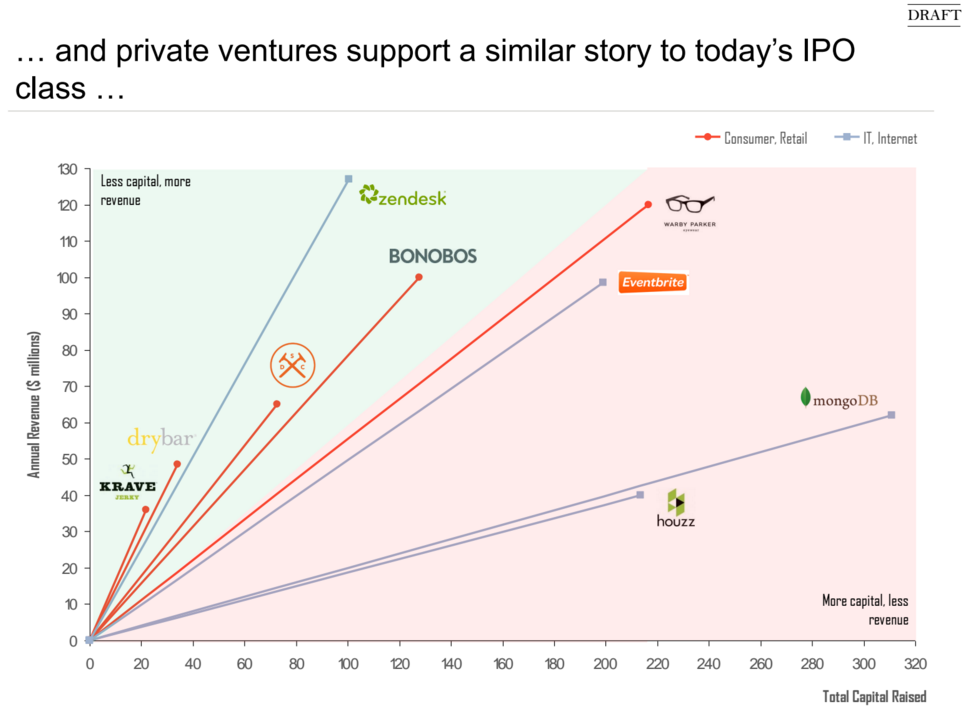 Consumer electronics is just as brutally competitive as the rest of the consumer goods space but also typically suffers from limited margins. Not to mention that the space is rapidly being disrupted by smartphones. Amazon’s Kindle, Flip video cameras, Garmin GPS and Texas Instruments’ graphic calculator have all lost traction with the advent of the smartphone. Garmin’s stock took a very clear dive since the introduction of the iPhone, currently trading at about half its value from 2007. Specialty consumer electronics are being crowded out by multi-purpose mobile devices and apps.

Take a look at one of the biggest consumer electronics hit of all time, GoPro. The chart below, also made using CB Insights data, shows how its 2011 venture round only yielded a 1.3X multiple for investors: 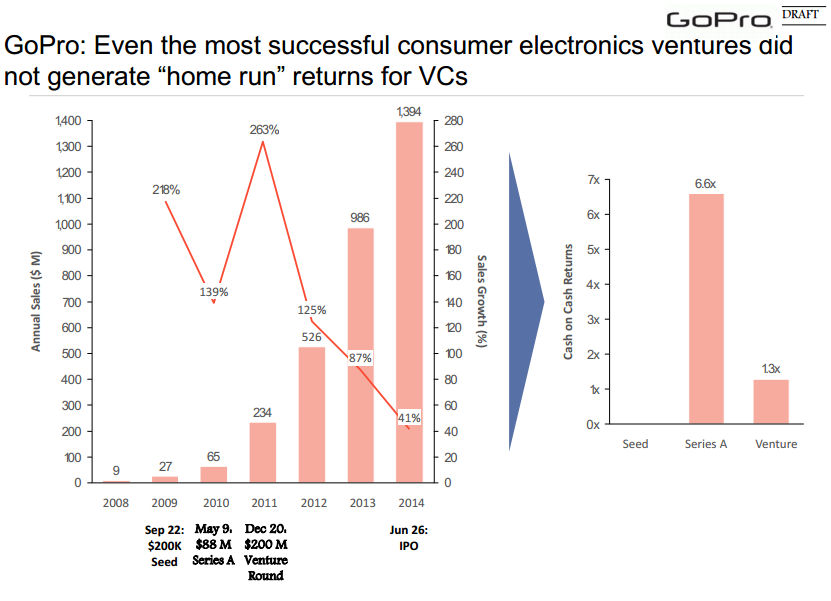 Fitbit’s recent IPO was far more successful for venture backers (91.6X for Foundry Group), but that may be because of Fitbit’s profile as a health device, as well as its app- and data-centric suite of supporting products for its wearables. In other words, it’s as much a software company as it is a gadget manufacturer.

Want more data about companies focused on consumer products? Login to CB Insights or sign up for free below.