Research Brief
2145
Analyzing the VCs with the most heavily-funded current seed bets. First Round Capital and SV Angel rank in the top 5.

Given the exit drought for startups, there are many investors with extremely well-funded, still-private companies in their portfolios. They may come under increasing pressure from LPs no longer satisfied by paper returns. This led to Hunter Walk opining that more early investors will begin to offload their shares in later rounds.

With this in mind we wanted to consider which VCs could stand to benefit the most by selling shares into later rounds, as Hunter suggests. While the early-stage funds Hunter was talking about could refer to everything from Seed to Series B investments, we specifically focused on Seed bets.

So we used CB Insights data to look at individual VCs’ seed-stage bets — private companies in which they invested in at the seed round — and added up how much total funding these companies have gone on to raise in the aggregate. Specifically we looked at all VCs which have made at least 20 Seed investments since 2010, and added up their seed portfolios’ aggregate dollar amount raised in equity financing.

Uber, with its total $7.81B raised, skews the overall ranking, with its Seed-II investors, First Round Capital, Founder Collective, and Lowercase Capital placing in the top 3 with over $8B in total funding to their current seed bets (including Uber). 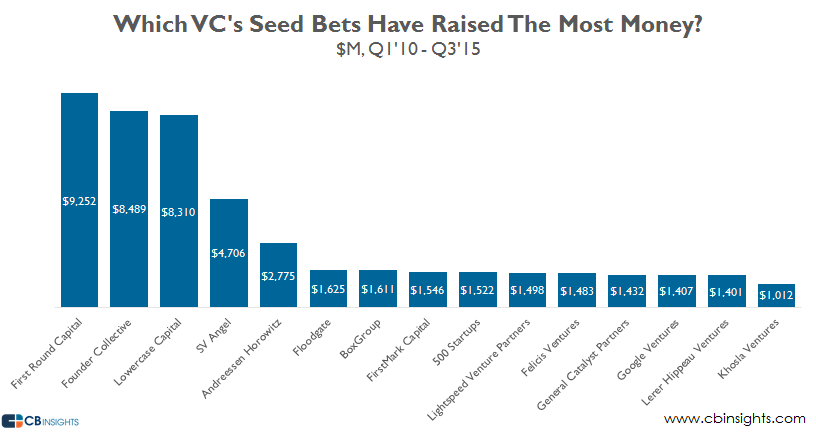 When we remove Uber from the dataset, things shift significantly. SV Angel, one of the most active early-stage VCs in the world, leads all VCs,with its current seed bets having raised a total of $4.7B, including Pinterest’s $1.32B of total funding. Andreessen Horowitz, a seed investor in Zenefits ($584M total funding), Domo Technologies ($483M), and Stripe ($190M) is second, while First Round Capital still ranks in the top 3 without Uber, with seed investments in Warby Parker ($216M) and AltSchool ($111M), among others. 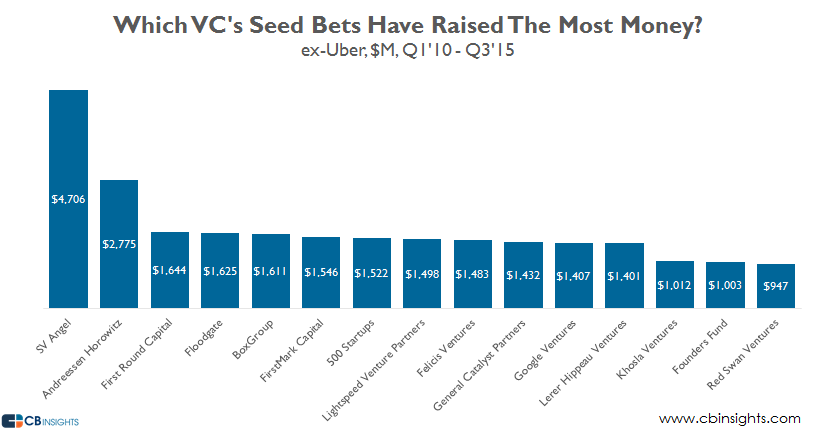 Funds like SV Angel and First Round Capital that have a breakout winner among their seed investments are in a better position to sell into later rounds, should they choose to do so.