Research Brief
1443
Behind mega deals to Domo, Qualtrics and Pluralsight, Utah VC funding in the first three quarters of 2014 already tops that in all of 2013 by 103%.
See more highlights from the Q3 2014 Venture Capital Activity and Exit Report.

Behind a handful of software companies racking up big financing rounds and huge valuations, Utah has become a venture funding hub in 2014. Between Q4’13 and Q3’14, venture investment in Utah-based companies hit $954M across 47 deals, according to CB Insights data.

By way of comparison, that amount is over 67% more than VC funding totals to Colorado over the same period and approaches the $1.28B in venture capital that Washington-based companies took in the last four quarters. Colorado and Washington are generally regarded as venture hubs but it appears that Utah should become part of the conversation as well.

The chart below highlights the quarterly VC trend since 2012 to Utah-based companies. Notably, Utah VC funding in the first three quarters of 2014 already tops that in all of 2013 by 103%. 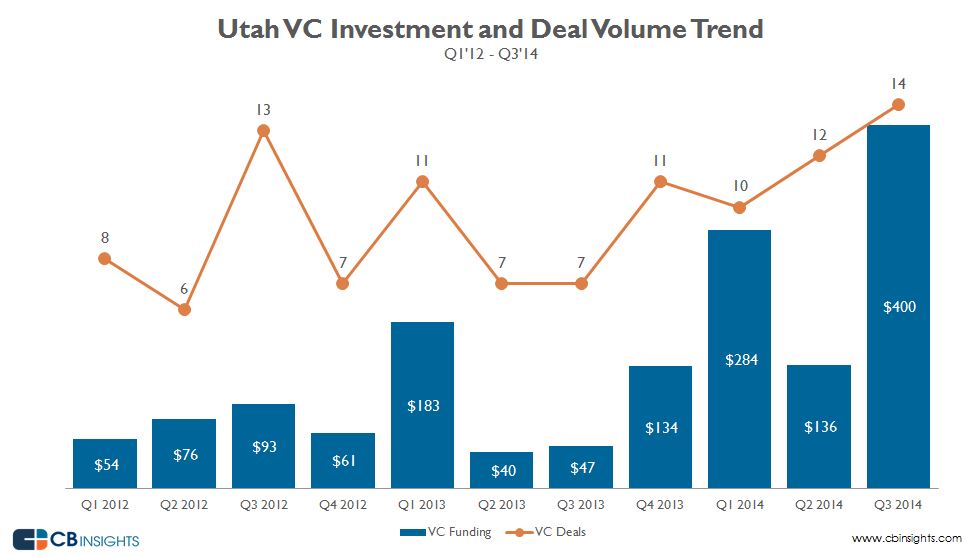 Mega financing rounds to Utah companies have been on the rise as Q3 2014 alone saw Qualtrics and Pluralsight raise $150M and $135M financing rounds respectively. Insidesales.com raised a $100M Series C in April 2014 as well. As the table below highlights, there are at least four VC-backed companies in Utah that have garnered valuations near or over $1B.

Note: Data in this brief only includes only rounds in which VCs participated. Want more Utah VC data? Check out the CB Insights Venture Capital Database. Sign up free below.