Hoping to make the used car buying and selling experience more seamless and reliable, investors are putting major dollars behind startups providing online transaction platforms for used cars both in the US and abroad. The rise in funding comes despite the presence of huge incumbents in the multibillion dollar market including CarMax (NYSE: KMX, Mkt Cap: $13.3B) and AutoNation (NYSE: AN, Mkt Cap: $7B).

The used car e-commerce space has caught the attention of prominent investors including Sequoia Capital, KKR, Tiger Global Management, Digital Sky Technologies, and Baidu. Funding to used car marketplaces jumped over 9x between 2013 and 2014, according to CB Insights data. Funding has already hit a new high in 2015 thanks to several notable rounds, such as a $170M Series C round to Beijing’s Uxin Pai from investors including Baidu and KKR in Q1’15. Uxin Pai had previously raised a $260M Series B round from Tiger Global and Warburg Pincus in Q3’14.

The number of deals and different geographies of used car marketplaces has grown too. In the last 2 years, used car companies in countries including India, Russia, Pakistan, Myanmar, Luxembourg, and the Netherlands have received funding. 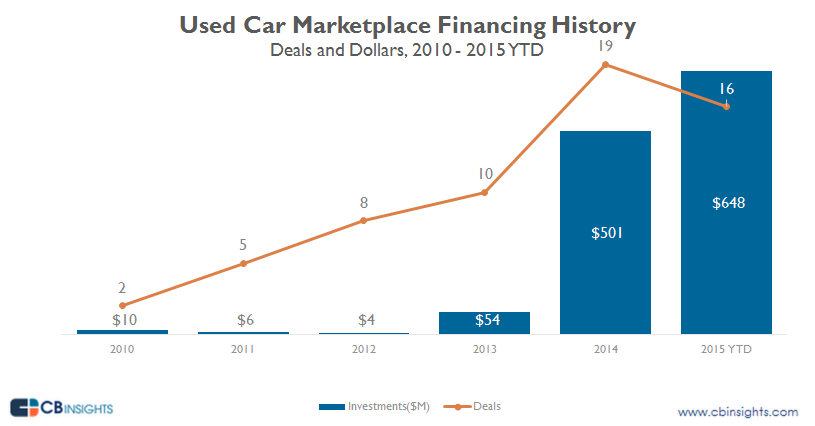 The most well-funded companies in this category include three China-based online transaction platforms: Uxin Pai, Cheyipai, RenRenChe. Uxin Pai led the pack, with almost half a billion dollars in funding starting with a $30M Series A round in 2013, a $260M Series B round in 2014, and $170M Series C round in 2015.  Auto1 and Los Altos, Calif.-based Beepi round out the top 5.

Beepi has raised almost $80M from backers including Redpoint Ventures, Foundation Capital and Sherpa Ventures, and is reported to be raising $300M more at a $2B valuation. The most well-funded user car marketplace startups are ranked below: