Research Brief
2799
Investment in private US tech companies remain depressed after the collapse at the tail-end of 2015. Deals recover but funding remains significantly below 2015 levels.

The chill in US tech investing may be seeing a thaw, but if so it’s not a very dramatic one and dollar funding levels are still way below the levels seen in late 2014 and early to mid-2015.

The final quarter of 2015 saw investment to private tech companies in the United States cool off dramatically. Deals dropped 14% and dollar funding collapsed by 40% in Q4’15.

We used CB Insights data to dig into the trends in the first quarter of this year and found some (faint) signs of recovery. Deal activity did bounce back in Q1’16, with deals growing to 1,797 equity funding deals in the quarter, which is still off the peak of 1,900+ deals seen in Q2’15 but only by 4%.

The picture for funding remains grim, with only $12.2B of funding going to private US tech companies in the last quarter. That’s an uptick from Q4’15 but lower than any other quarter since Q3’14.

Activity has clearly centered on smaller deals on average than what was the case at the 2014 and 2015 peak.

One driver of these trends is the pullback in US tech startup investing by deep-pocketed mutual funds, hedge funds, and crossover investors in general (crossovers are investors customarily focused on the public markets). 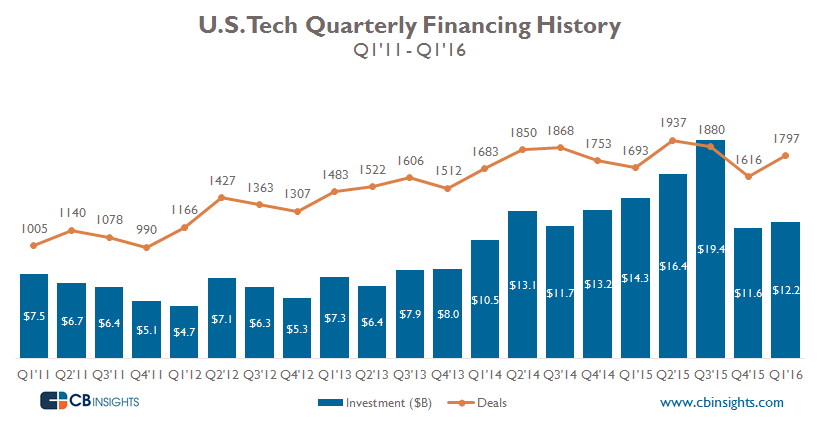