Baidu, Alibaba, and Tencent have invested in over 25 times as many US startups as they've acquired since 2011.

China’s three largest Internet giants  – Baidu, Alibaba, and Tencent – have a whopping combined market cap of over $400B. And over the last five years, the three giants have completed over 50 investments into US-based startups, including familiar consumer tech names like Snapchat, Lyft, and Uber.

Massive corporate investments like these have helped drive US VC funding to highs not seen since the dot-com boom. For example, Alibaba has participated in 7 $100M+ equity funding rounds to US startups including Jet, Snapchat, Kabam, Lyft and Tango.

But despite their US investment binge, Baidu, Alibaba and Tencent have been much quieter when it comes to US-based acquisitions, according to an analysis of CB Insights data. This despite anecdotal evidence that they are very much in the running as potential acquirers.

The chart below highlights the US startup deal participation by Baidu, Alibaba, and Tencent since 2011. Active early-stage investor Tencent has participated in the most US startup deals annually out of the three and hit a five-year high for US activity in 2015 at 18 deals, including financings of HomeHero, Circle Medical, and Vurb. 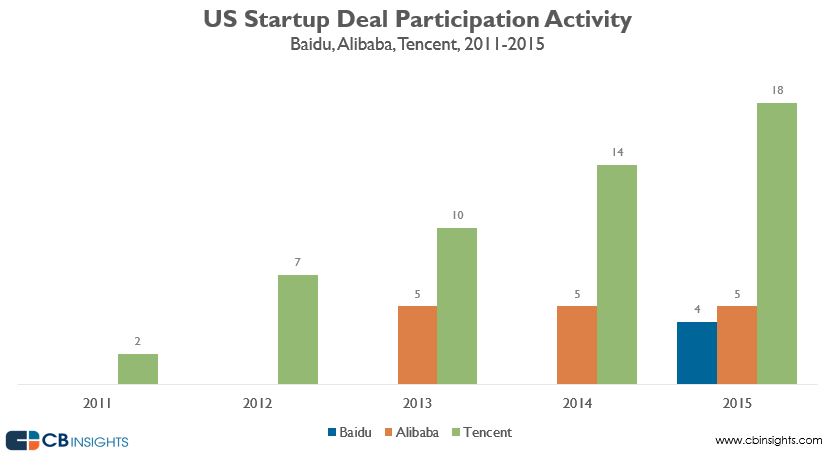 But a look at the three’s M&A activity in the US highlights a much different picture. Neither Alibaba or Baidu have completed a single acquisition since 2011 in the US, while Tencent has acquired just two companies over the period including League of Legends publisher Riot Games and online gamer forum Zam.

“There has been a real expansion of the credibility of Chinese companies. If we as bankers are selling a company in the U.S., Chinese buyers are on the list now — not just at the bottom of the list as the second-tier players, but firmly on the list and sometimes even at the top of the list.”

Will 2016 be the year China’s tech giants turn their portfolio of US investments into M&A deals? Chime in below in the comments.

Looking for more venture capital and M&A data? Sign up below for the CB Insights Venture Capital Database.