“’LA is having a moment’ and both VCs and LPs realize it,” Suster wrote on the Both Sides of the Table blog. “Increasingly local entrepreneurs are finding they don’t have to ‘take the trip up North’ quite as often … We hope that having a larger fund ourself will mean that fewer need to take the trip even as their capital needs grow.”

CB Insights’ venture fund data shows that LA is indeed having a moment: Upfront’s latest fund is one of at least 7 VC or corporate venture funds based in the Greater Los Angeles area to close $50M or more in 2017 YTD. (In fact, it’s one of two to close this week: LA-based Kairos Ventures closed $74.7M toward a potential $150M venture fund on Thursday.)

For comparison, only 5 venture funds in our database closed $50M or more apiece in funding over all of 2016.

Up to 60% of the firm’s deal activity over the last five years has gone to companies based in Southern California, according to CB Insights, and more than 70% of the firm’s total deals over the same five-year period went to seed and Series A companies. The new fund will also align with Upfront’s broader strategy of investing in early-stage deals. 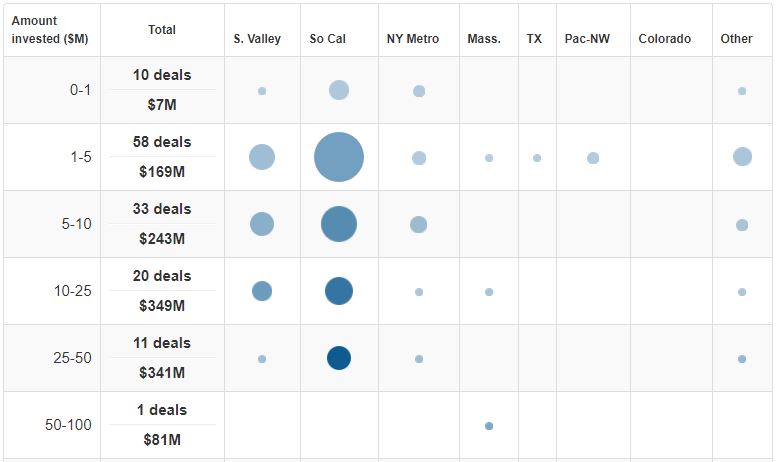 Upfront Ventures has made at least seven investments in Greater-LA startups so far this year, including participating in two follow-on rounds to Stem Disintermedia, a platform for artists and musicians to collect entertainment royalties. Others that received funding from Upfront this year include GOAT, a marketplace for collectible sneakers, and Comparably, an app-based job placement service.

Want more insights on LA startups? Log in to CB Insights or sign up for free below.