New York-based Union Square Ventures has made prescient bets on some of consumer tech's biggest wins. We dig into what, where and with who USV is investing.

When Etsy went public earlier this year at a $1.78B valuation, the IPO marked the 5th straight year with a billion dollar exit for New York City-based venture firm Union Square Ventures.

Indeed, the firm has recorded some of venture’s biggest wins in recent years. Twitter, Tumblr, and Zynga all count Union Square Ventures as an early investor. Given its fund size, it is probably one of the best pound-for-pound venture capital funds out there having shown a prescient ability (much like its larger peer Sequoia Capital) of getting into big exits early.

Specifically, we’ll discuss USV’s recent strategies and activity that have helped shape the firm including:

Below is a graph of Union Square Ventures’ monthly investment activity (deals & funding participation) over time from their profile on CB Insights.

More notably, Union Square Ventures has notched a remarkable 4 $1B+ IPO exits and 2 $1B+ acquisition exits since 2011.

Here are its most notable exits since the start of last year:

The scatterplot below highlights USV’s exits over time (those with disclosed valuations):

Union Square Ventures’ last-raised fund occurred in January of 2014, when the firm raised $350M. The funds are split evenly between the firm’s fourth early-stage fund and its second “opportunities” fund, which allows the firm to back companies as they mature.

USV’s fund size consistency is notable especially as the general partners could probably quite easily raise larger funds if they so desired. However, this consistency is a good thing based on research. Academicians have found that fund consistency is a driver of fund performance. Simply stated, funds that grow in size don’t perform as well because the skills to invest a $100 million fund are very different than those required to manage a $1 billion fund.

Fred Wilson is a Union Square Ventures co-founder and managing partner. Wilson sits on the board of directors for companies including Kik, Work Market, Return Path, Coinbase, and Soundcloud.

Brad Burnham is a managing partner at Union Square Ventures and co-founded the firm with Fred Wilson in 2003. He had previous co-founded advertising network company Tacoda in 2001, which was acquired by AOL. Burnham is on the board for companies such as Meetup, Stack Exchange, and Yieldmo.

Albert Wenger is a partner at Union Square Ventures and was president of del.icio.us, a USV-backed bookmarking service, during its acquisition by Yahoo in 2005. As an entrepreneur, Wenger sits on the boards of companies such as MongoDB, Twilio, and Clarifai.

Andy Weissman is a partner at Union Square Ventures and started his career at AOL then in venture capital with Dawntreader Ventures. Weissman co-founded New York-based startup studio Betaworks in 2007. Weissman sits on the board of companies including Figure 1, Splice, and VHX Corporation.

Nick Grossman of USV’s investment team recently penned a blog post on some of the areas that USV is currently looking at, including collaborative platforms in greenfield sectors (i.e., industries that are “still operating under inefficient bureaucratic hierarchical models”), worker-support services, “thin platforms” (platforms that “do less, take  less, and exert less control”), and new tech protocols inspired by Bitcoin and blockchain.

An analysis of USV’s new investments shows that USV is not just looking in these areas but also betting on them.

Within greenfield sectors, for example, USV has made recent investments in Figure 1, a mobile network model for doctors to exchange notes on medical imagery, and Casetext, a free legal research website for crowdsourced legal annotations.

Within new protocols, USV has invested in several firms on the blockchain and/or in bitcoin technologies including OneName, an open-source identity protocol provider; OpenBazaar, a decentralized marketplace using bitcoin; and Coinbase, a bitcoin wallet and exchange.

The chart below highlights USV’s new deals in 2015 YTD (Note: follow-on deals during the period not shown on the chart below).

Despite being based in New York City, Union Square Ventures has continued to look well beyond the Big Apple for deals — especially in Europe. Since the start of 2012, USV has invested in one French startup, three German startups, and two UK startups. Figure1 — the mobile medical imaging app — marked USV’s second investment in Canada.

USV has also made a number of bets outside of Silicon Valley and New York as can be seen in their investments in Dwolla in Iowa, C2FO in Kansas, Covestor in Boston, OpenBazaar in Virginia, and Duolingo in Pittsburgh, among others.

More data on USV’s shift away from NY.

With their Opportunity Fund structure, USV can invest at the Series A stage and is able to continue investing in their winners. Over the last 8 quarters, just under 29% of USV’s deals came at the Series B stage, followed by 20% at the Series C stage, as USV pursued follow-on investments to firms ranging from Coinbase and Kik to Skillshare.

Early-stage deals (Seed/Series A) took a combined 29% of USV’s deals over the period. All of USV’s first investments in a company since the start of last year came at the Seed or Series A stages.

Below is a table of details on Union Square Ventures’ investments in various stages for the last two years. The size of the bubble represents the number of deals, while the darkness of the blue represents the total amount of funding. 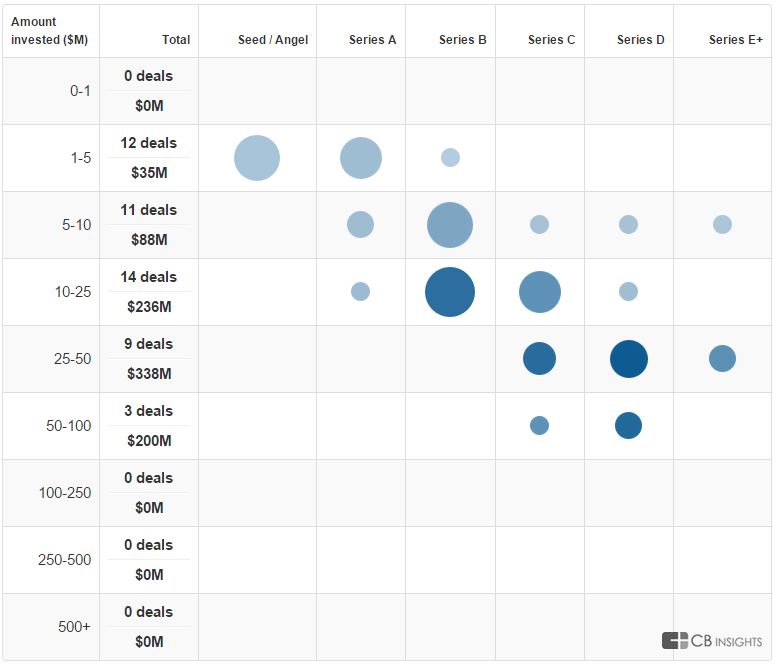 With the exception of Q1’14 and Q2’09, Union Square Ventures has generally kept a well-balanced portfolio in terms of new investments and follow-on investments. In Q2’15, USV ties its highest quarterly proportion of new deals to follow-ons with first-time investments to Dronebase, OpenBazaar, Clarifai, and La Ruche Qui Dit Oui.

The chart below, taken from Investor Analytics on CB Insights, illustrates the ratio of Union Square Ventures’ new investments to follow-on investments. 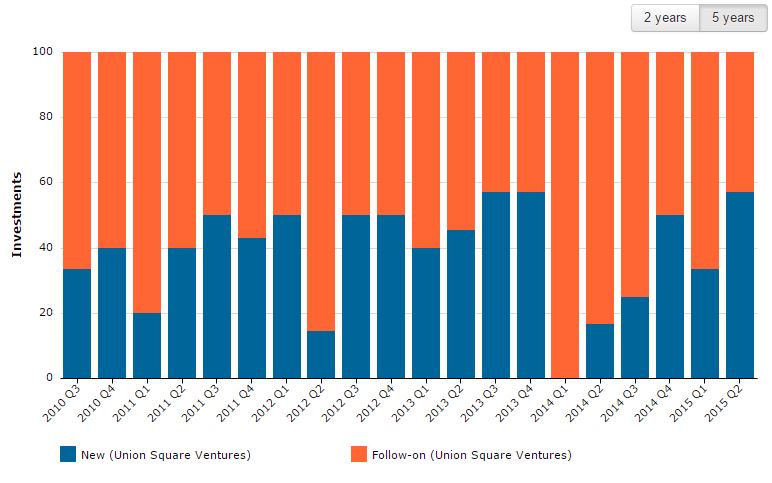 Behind follow-on participation in large deals including Coinbase, Duolingo, and C2FO, Union Square Ventures’ median deal size has risen to $20M in each of the first two quarters of this year.

The graph below from Investor Analytics on CB Insights shows both the average and median deal size each quarter for the last five years. In more recent quarters, USV’s median deal sizes have trended between $7M and $20M. 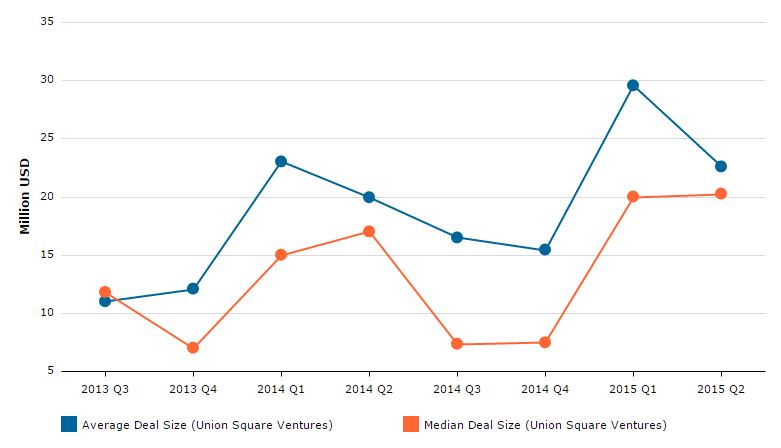 Andreessen Horowitz comes in second, co-investing with USV in 16 rounds across 10 companies. Index Ventures is also among USV’s prominent syndicate partners, having co-invested in Etsy, Soundcloud, and Shapeways among others.