Etsy’s IPO today will mark the largest venture-backed exit in New York tech. It will also mark the fifth straight year that Union Square Ventures has notched at least one billion-dollar exit, according to CB Insights data.

The New York-based venture firm ‘s top hits started off with the $7.7B IPO of Zynga. USV first invested in the gaming firm’s 2007 Series A. Recruit’s acquisition of Indeed came next in 2012, another Series A investment. In fact, USV was an early-stage investor in five of its six billion-dollar exits since 2011. Lending Club, which went public last year at a $5.4B valuation, was the only exception. Logo chasing is not something that Union Square Ventures does.

The Investor Analytics chart below highlights USV’s exit history – the firm has notched 10 acquisitions and now four IPOs since the start of 2011. 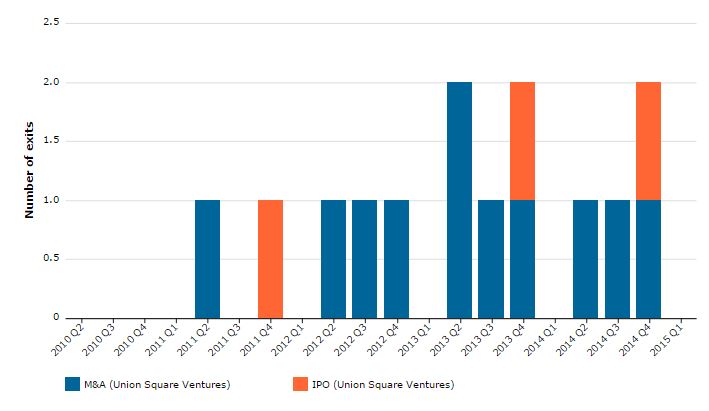 The firm’s ability to get in early to some of venture’s biggest exits is more remarkable given the consistency of their fund sizes.  Unlike many funds which have grown in assets under management (AUM) over time, USV has maintained consistency in their funds as the screenshot below from CB Insights highlights.

Here are all of Union Square Ventures’ billion-dollar exits since 2011.