The number of venture capitalists investing in billion dollar exits is increasing. By a lot.

At the end of 2013, we analyzed billion dollar tech exits and the ability of VCs to get into those big exits consistently and early, and the results were not pretty. So unpretty, in fact, that we declared that most VCs are not great predictors of technology success (VCs loved that btw) We found that only 3.5% of active VCs had actually invested in 2 or more billion dollar exits over the 10 year period we’d studied (2004 to 2013).  A single billion dollar exit was luck. Two or more was where an investor could be considered having skill.

At the time, we wrote:

While venture capitalists talk about wanting to identify and invest in billion dollar companies, the reality is that few VC investors actually do. Even when they do, very few are able to do it again … Moreover, for those who were astute enough to get into these big exits, getting in early is even rarer, highlighting the paucity of firms who can truly see around corners and who have access to truly superior dealflow.

What a year a difference makes. With the vibrancy of the market in 2014, things are most definitely looking up for venture capitalists.

Summary: It looks to be a good time to be a venture capitalist. Of course, the old adage that “one should not confuse brains with a bull market” is worth restating.

We dig into the data below in more detail.

As the graphic below highlights, there has been an acceleration in the pace and number of billion dollar VC-backed exits. Billion dollar valuations to private companies have followed suit in 2014 with 38 private companies joining the billion dollar club in 2014. The chart below plots the exits (sans Facebook’s $104B IPO) by year and valuation. The dramatic increase in Unicorns is evident by the growing cluster that starts in 2012. Starting in November 2011 with Groupon’s IPO, we also see the increase in VC-backed US tech exits over $10 billion. 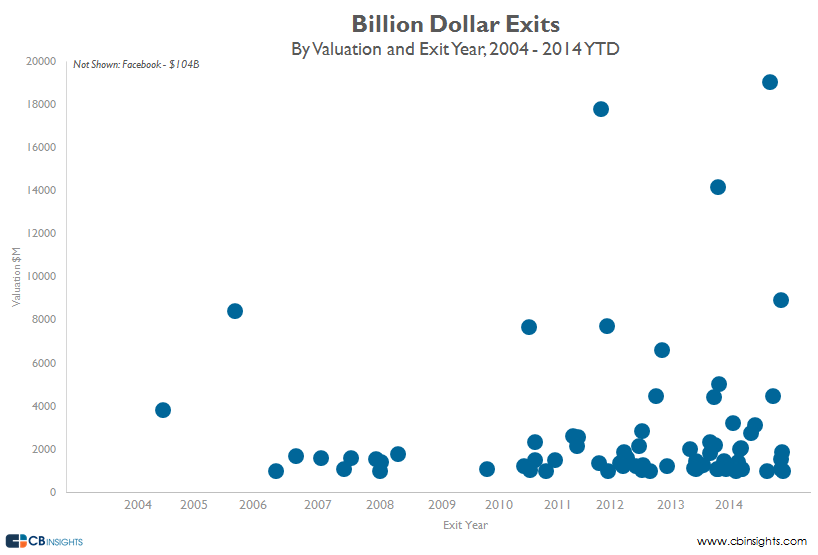 As we move further to the right, we enter increasingly rarefied VC air. The far end of the spectrum is comprised of 6 VCs who each participated in 8+ billion-dollar exits, including Sequoia Capital, New Enterprise Associates, Kleiner Perkins Caufield & Byers, Accel Partners, Benchmark, and Greylock Partners. These six elite VCs represent just 0.53% of all active US Tech VCs.

The skilled VCs (those with 2 or more billion dollar exits) are increasing.

Are these really the skilled VCs?

Being part of large exits is not enough of a test of a VC’s effectiveness. There is a lot of logo chasing occurring in VC today and so an investor who has jumped into later-stage companies (Series C or later) is not as skilled as an investor who got in early.

In other words, large late-stage exits do not necessarily correlate with the investment’s returns, as often the largest returns from an exit go to the earliest investors.

To that effect, and to better assess a VC’s investment selection proficiency, it is important to look at what stage they made their first investment in a company. 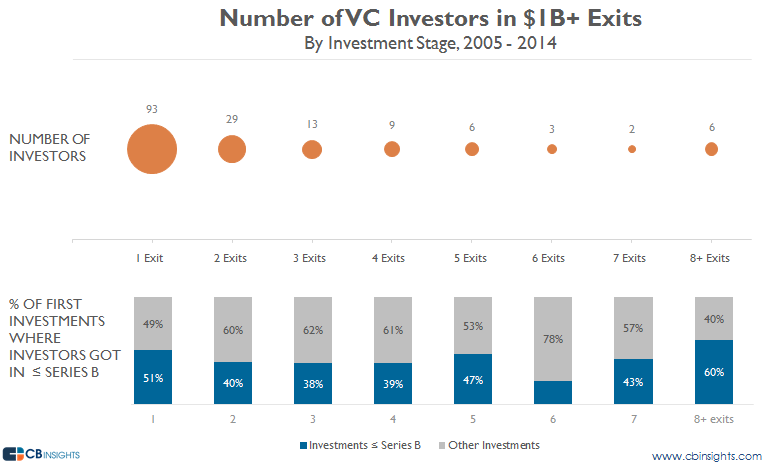 The chart above breaks down the investors based on the stage they invested in each of the $1B+ companies. For example, if we look at the six investors with 8+ $1B+ exits, we find that 60% of their investments were in a Series B or prior round.

On the other end of the spectrum, when looking at the 93 VCs with just one $1B+ exit since 2005, 47 (or 51%) were at or before the Series B stage. This number is up considerably from last year’s analysis which saw just 38% of the 68 VCs with one $1B+ exit get in at Series B or earlier.  Said another way, nearly half of the VCs who had just a single billion dollar exit over the period from 2005-2014 were not able to get in prior to the Series B financing.


How many VCs actually see around corners?

When looking who invests at the Series A stage or earlier, we start to identify the truly great VCs. The elite “stock pickers” who have the best networks, the proprietary dealflow, the heightened sense of pattern matching.

As you can see below, across the entire spectrum, the number of VCs who consistently get in early to these deals is quite low. If you are an LP or entrepreneur, these are the truly elite and skilled VCs. 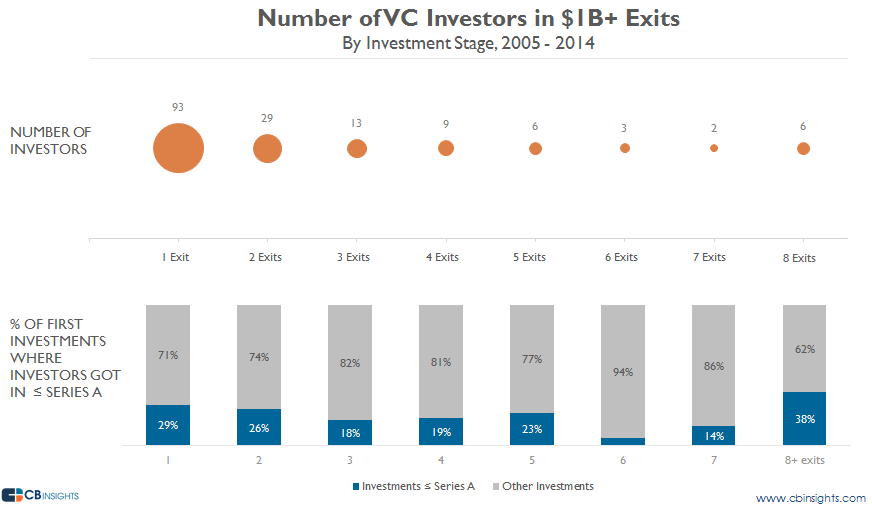 All of the underlying exit and investor data used in this research brief is on the CB Insights Private Company Exit Database. Sign up for free below and learn more about our VC predictive models, Investor Mosaic.