Research Brief
1651
The most valuable companies are raising even more money at higher valuations. Just how fast are valuations increasing?

Companies in the billion dollar club are raising even more money at higher valuations. With Uber extending their fundraising by another billion dollars, Snapchat reportedly raising at a $19B valuation, and Pinterest also raising to break into the $10B valuation club, we decided analyze the top ten most valuable private US companies and their valuation changes over time.

First, here is a list of the most valuable private US companies.

Uber tops the list, raising nearly $5B in funds at a $40B valuation. Data analytics company Palantir became the second most valuable company after raising a $50M round in December at a $15B valuation. There are currently 6 private US companies worth more than $10B, with Snapchat having raised the least in that group. Here’s the list:

When we analyze the valuation growth of these startups, AirBnB’s valuation grew the most between their last two funding rounds, jumping 300% to their $10B valuation. In absolute numbers, Uber jumped in valuation by $25B in value in their last rounds. Snapchat has also had a massive increase jumping from a $65M valuation in their Series A in 2013 to $10B by end of 2014 (and possibly $19B should their new financing close).

The graph below highlights the step up in valuation between these companies last 2 funding rounds. Uber’s aforementioned step-up in valuation is clearly visible. 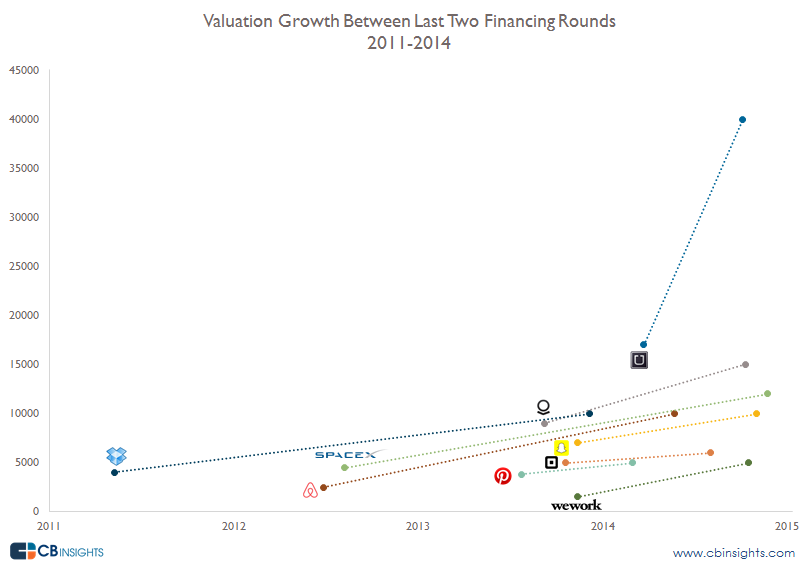 When we plot valuation growth against time b/w last 2 rounds, we get a sense for momentum of companies within this elite list. Uber and WeWork grew their valuations most in the shortest amount of time with WeWork’s value growing by 233% in less than a year and Uber growing by the aforementioned $25B in 6 months. AirBnb’s valuation saw the biggest step but unlike some of their billion dollar peers, they waited nearly 2 years between rounds. In earlier days, this lag would be customary but in the current climate where hedge fund, private equity and mutual fund money is pouring into tech companies, 2 years has become a long time between fund raises. If the $19B valuation for Snapchat happens, it will resemble Uber and WeWork in terms of its momentum. Very notably, Benchmark Capital is an investor in all 3 of these companies. 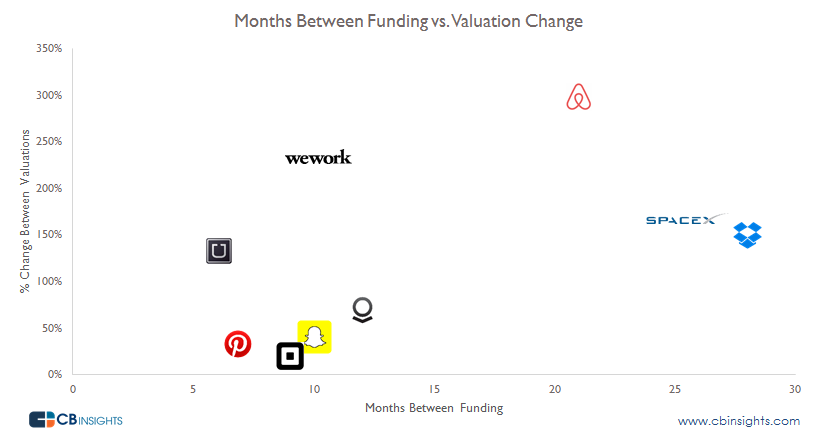