There are buyers of tech companies doing deals of $1B+. They're just not interested in overvalued unicorns.

“We’re not buying what you’re selling.”

The unicorn list currently consists of 168 venture-backed unicorns valued at a collective $600B. And although the unicorn herd is as big as it’s ever been, buyers of billion dollar tech companies just don’t appear that interested.

And it’s not because these buyers are sitting on the sidelines.

In fact, there have been 21 acquisitions of private tech companies for over $1B in 2016. But only 2 have been of unicorns. (Note: unicorns are private companies, primarily in tech which are venture capital-backed, worth over $1B on paper)


As might be expected, given the billions of capital invested in unicorns, investors are keen to start seeing these unicorn exits. Some investors have been lamenting the lack of an exit market for these unicorns either via IPOs or M&A. While there have been some very limited bright spots this year on the IPO front (witness Twilio), the M&A scene for unicorns has been bleak.

But given that billion dollar exits are happening, blaming the lack of unicorn M&A on a lack of buyers is incorrect.

The 2 that have been of a venture-backed unicorn tech company include Lazada which Alibaba took a controlling interest in at a pre-money valuation of $1.5B and Cisco’s purchase of Jasper for $1.4B.

So the bad news for the unicorns is that the acquirers are there.

They’re just not that into you.

It is worth noting that the IPO bright spots like the exit of Twilio was an instance where the company was not a private market unicorn prior to exit. More recently, we saw similar with Dollar Shave Club which was acquired by Unilever for a billion. DSC was not a private market unicorn either. Also notable, this year has also seen a migration to M&A buyers of $1B companies coming from outside of tech.

The paucity of unicorn M&A may not be all that surprising to those in the know. For quite some time, especially in the middle of 2015, getting the $1B+ unicorn valuation became a status symbol that founders and investors believed would attract talent, press attention about the company and/or about founders upending stodgy industries.

During those heady days, every startup was having their Oprah moment.

And that was all a lot of fun if the growth continued and the late-stage money kept flowing to absorb massive burn rates. Assuming all that happened, the good times would continue to roll. Sound business models become secondary when the real business model is raising investor cash.

But then investors pumped the brakes.

The zenith of unicorn births came in Q2’15 and Q3’15 as the graph from the Q2’16 Venture Pulse Report highlights. 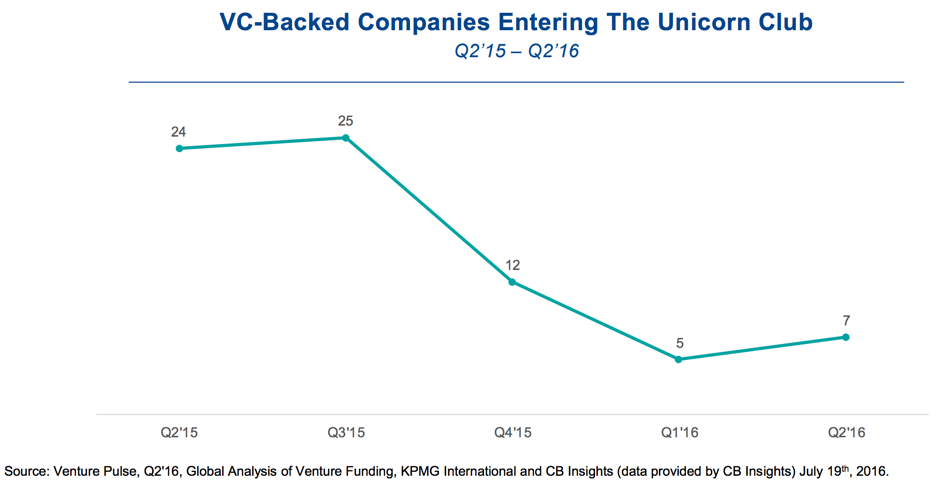 But the lack of exits, choppiness in the public markets, macroeconomic concerns and shaky fundamentals by some of these unicorns formed like Voltron to put a damper on unicorn births in Q1’16 and Q2’16. Profitability, cash flow positivity, and the once quaint idea of unit economics also became fashionable while growth at all costs fell out of favor. 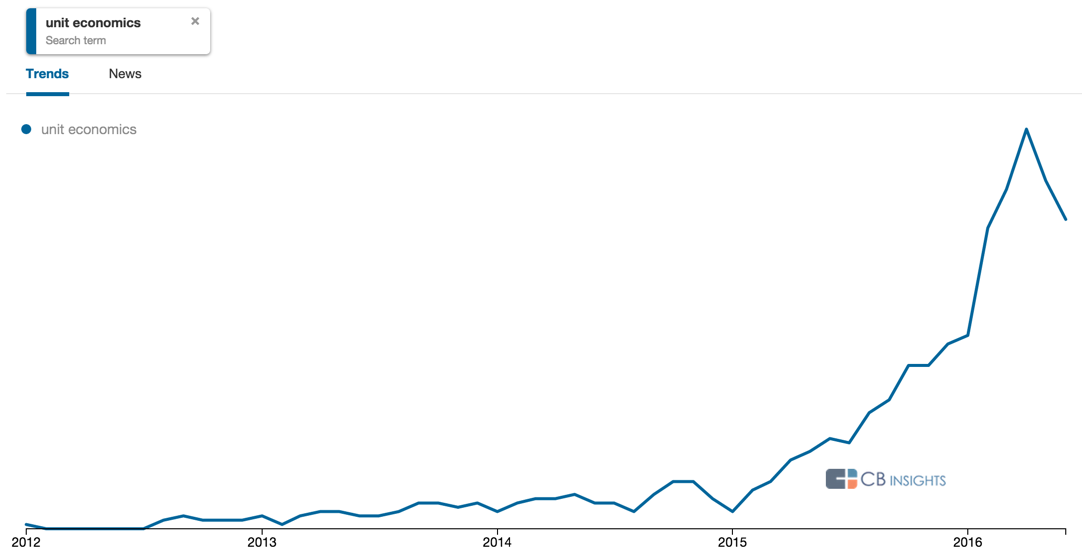 Growing into a unicorn over-valuation

The new focus on unit economics may seem odd given it seems like business 101, but in the case of unicorns, it does present a new challenge.

For many, however, they were priced for perfection, i.e. they had to grow into their lofty valuations. Said another way, the unicorns were overvalued when they raised money and so had priced themselves so high that that there were no natural M&A buyers for them until their valuations became more aligned with their underlying performance. In some cases, private market unicorns are actually valued at much higher multiples than their public market counterparts. Dropbox looks overvalued relative to publicly traded Box as is Cloudera relative to public comparable Hortonworks.

The new focus on profitability or cash flow positivity, while pragmatic given the changing financing landscape, also has implications on growth which these unicorns were being initially valued on.

What’s next for the unicorns?

The lack of unicorn exits cannot simply be blamed on “the market”. As the data above illustrates, there are buyers of tech companies over $1B+.

So what’s a unicorn to do?

For the minority of unicorns with strong fundamentals and breakneck growth, life will continue on.

But if you’re one of the unicorns that got out over your skis, expect to see one of two strategies:

The majority of unicorns will need to raise in the final months of 2016 as we’d previously detailed.

With some belt tightening, the financial runway of these unicorns may be extended. But if investors and founders of unicorns are looking for a favorable exit via M&A, the reality, as the first half of 2016 has shown us, is that there are buyers out there. They’re just finding better deals outside of the unicorn herd.