Research Brief
1858
While everyone wants a unicorn company in their portfolio, how many investments end up actually becoming billion dollar companies? Not many.

With 108 unicorn companies today and the rate of unicorn creation accelerating, you’d expect that that unicorns have become drastically more common.

However, for all the fixation on companies reaching billion-dollar valuations, it remains pretty rare for a company to hit the unicorn mark.  In fact, the number looks to be just above 1% of companies.

Using CB Insights data, we broke down all the companies that raised their first, early stage financing round by year (vintage) and calculated what percent of those companies ended up reaching billion dollar valuations in private markets or via an exit.

The first notable trend is that the number of early stage first financings by year has seen massive growth, breaking over 4,000 in 2014 compared to less than 1500 in 2008. Of the companies that raised in 2008 and 2009 (which could be consider “mature vintages” at this point), only a bit more than 1% each year became billion dollar companies. 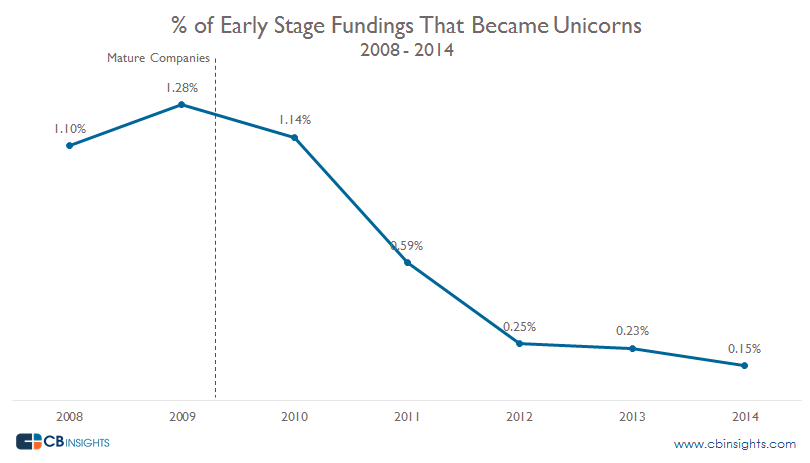 2010 actually saw the most companies, on an absolute basis, reach unicorn status, with more than 20 companies eventually joining the club. Interestingly, 15 companies who raised their first round of financing in 2013 or 2014 have already jumped into the billion dollar club highlighting the increasing pace at which unicorns are anointed. Some of the companies in this group include Zenefits and Airwatch.

Want more data on private unicorn companies? Visit our real-time unicorn page or sign up for our venture capital database below.