Research Brief
2487
Despite the overall dearth of mega-exits in 2015, the $1B+ exits include those of Box, Etsy, Fitbit, and Shopify.

2015 was the year of the unicorn, with 70 VC-backed tech startups reaching a $1B+ valuation. But it is much tougher to exit for a $1B+ valuation than it is receive a billion dollar valuation on paper, according to CB Insights data.

In 2015, there were only 11 mega-exits — tech companies that exited at $1B+ either in the form of M&A or an IPO. That said, Q4’15 did bring about signs of life on the mega-exits front, with 4 tech companies exiting for $1B+ in the quarter.

Using CB Insights data and analytics, we compared new tech companies reaching a $1B valuation vs $1B+ exits by quarter. See the chart, below.

There were 11 $1B+ exits in 2015 while there were 70 new companies who joined the $1B+ club, i.e. became unicorns. After zero $1B+ exits in Q3’15, the number of billion dollar exits by quarter recovered in Q4’15 to 4 (meanwhile, there were 12 new unicorns minted in the quarter) but it was still a weak year overall for mega-exits. 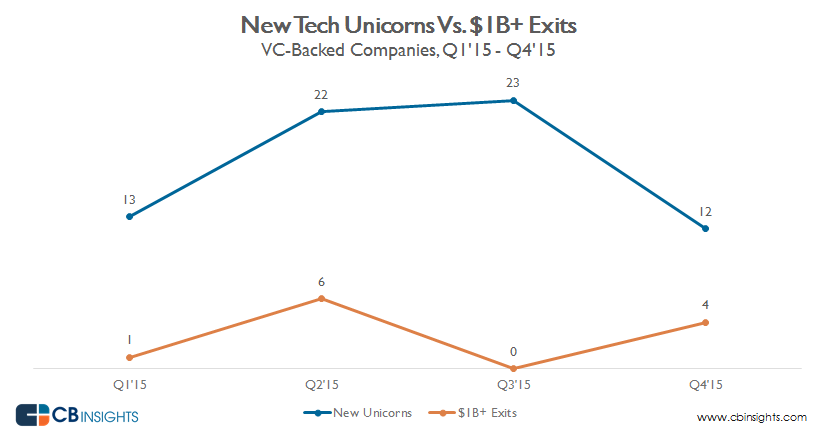