The UK’s Tech industry continued to garner significant investment, as Q1’15 marked a 17-quarter high for both total funding and deals. Specifically, UK-based VC-backed Tech companies raised $781M on 69 deals, up 111% and 28% respectively versus the same quarter a year prior. The funding boom was buoyed by international payments companies WorldRemit and Transferwise, as well as data center company Verne Global. 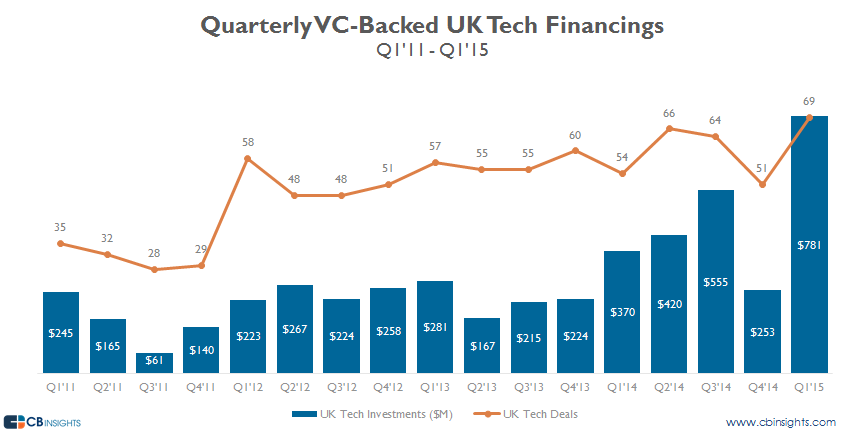 London dominated all cities both in deals and dollars, accounting for 86% of all funding and 70% of all deals to VC-backed UK tech companies. The UK also saw three new Tech companies join the $1B+ valuation club, as FarFetch’s $86M Series E, TransferWise’s $58M Series C, and Shazam’s $30M Series F valued each company at $1B.

Accel Partners and Index Ventures were the most active VCs in UK Tech in Q1’15. Both invested in Deliveroo, one of Europe’s hottest Tech companies, which raised a $25M Series B, while Accel’s largest deal was WorldRemit’s $100M Series B.

Want more data around European Tech Financings? Get our Q1 2015 EU Tech Report, login to CB Insights, or sign up for free below.