Since 2013, the UK and Germany have accounted for 38% and 14% of European fintech deals, respectively.

We took a deeper look at early-stage fintech financing in the UK and Germany, the two largest fintech hubs in Europe, to get a better sense of where venture investors in the region were pursuing new investments. Since 2013, the UK and Germany have accounted for 38% and 14% of European fintech deals, respectively.

Below, we detail early-stage funding trends as well as early-stage highlights. Early-stage deals include those closed at angel, seed, and Series A stages. 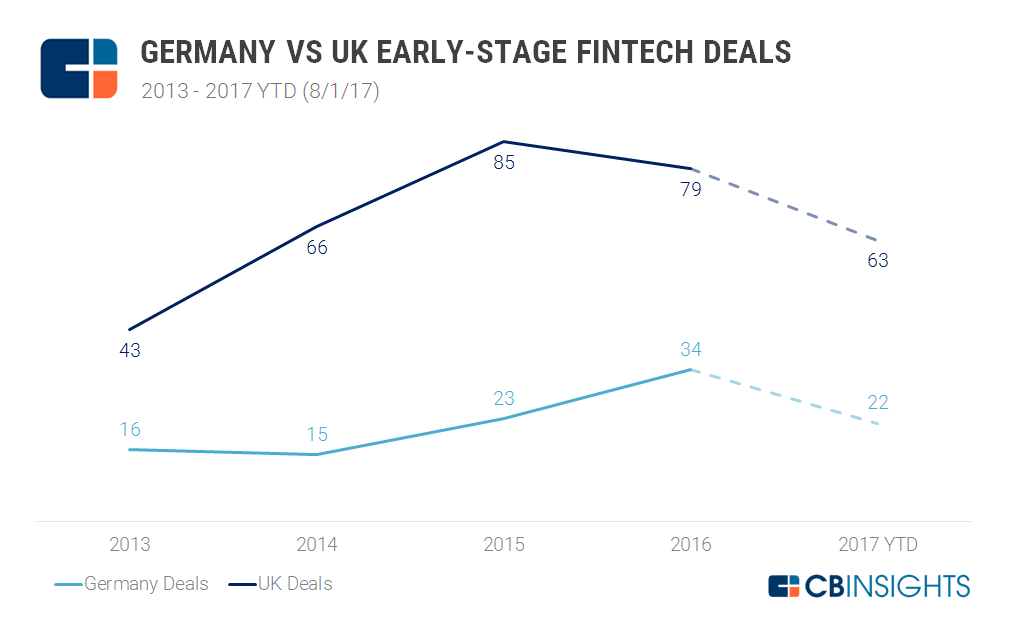 UK early-stage fintech financing has remained above 15 deals quarterly since Q2’14. Total disclosed funding has been a bit choppier: at $27M, Q4’16 was the lowest quarter since Q2’14, while the following quarter (Q1’17) saw the third-highest total funding at $81M and the largest number of deals at 33. Most recently, Q2’17 figures fell to $41M across 16 deals.

For example, Monese, which provides banking services for immigrants and expats, raised a $10M Series A in Q1’17, while Wirex, which allows for the holding of fiat currencies and cryptocurrencies in a single account on its personal banking platform, raised a $3M Series A in the same quarter.

Insurance has also been a hot area in the UK, with 7 early-stage deals closing in 2017 year-to-date. British startup Zego, which provides pay-as-you-go insurance for sharing economy companies, recently raised $2M in seed funding, while Brolly, which offers customers insurance insights, recently raised $1.3M in a seed round from Valar Ventures.

Insurance is trending up across Europe at large, with more than 20 early-stage deals closing for approximately $50M year-to-date. 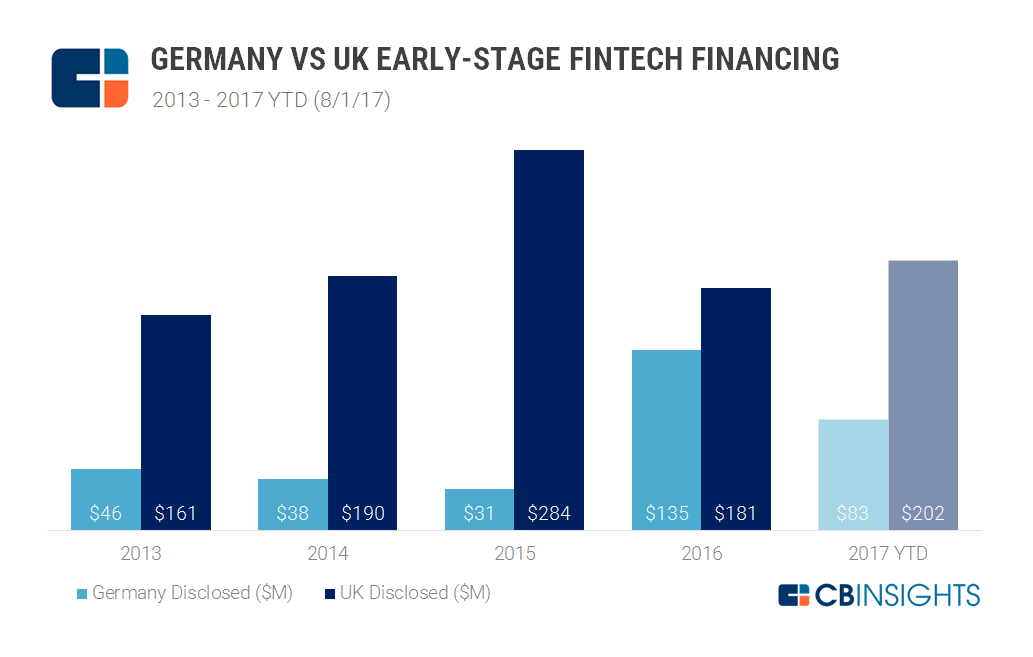 As in the UK, Germany is seeing lots of early-stage interest in insurtech companies: 8 insurance deals closed in 2016, compared to just 3 deals each in 2014 and 2015. This year looks promising as well, with 4 deals closing in 2017 YTD.

German insurance-focused fintech companies that have raised funds this year include Dentolo, a dental insurance platform and cost estimate tool that raised $3.5M in seed funding from Atlantic Labs, among others, and ottonova, a more general digitally-enabled health and supplementary insurance provider, which raised a $16M Series A from Hotlzbrinck Ventures and Tengelmann Ventures, among others.

Germany has also seen an increase in early-stage deals to small business banking and API-focused mobile banking platforms. Financing rounds to this group have increased steadily since 2015, which saw 5 deals close for $17M and was followed by 7 deals in 2016 (for a much smaller $6M).