Using CB Insights data, we took a historical look at how Didi Chuxing and Uber compare in their disclosed valuations.

We’ve already highlighted the web of investors backing these top ride-hailing services (as well as their top counterparts in Asia outside of China). Using CB Insights data, we took a historical look at how these two ride-hailing giants — which are both “decacorns” or private companies valued at over $10B — compare in their disclosed valuations.

With a significant head start, Uber kicked off its first financing in late 2010 at a (now-unthinkable) $4M valuation. By late 2011, that figure had jumped up to $347M, and from there it has risen steadily as Uber attacked markets around the globe. Though it is now retreating from China with the divestment of its operations there, it secured a $1B investment from Didi Chuxing at a $68B valuation as part of the deal.

Meanwhile, Didi Chuxing‘s precursors — Kuaidi Dache and Didi Dache — were beginning to raise in mid-2013, later merging in Q1’15 at a $8.75B valuation for the merged entity. Since then, Didi’s valuation climbed up to $28B by midway through this year, focusing primarily on China (though also investing in its ex-Uber peers). Now combined with Uber China, said to be valued at up to $8B, the resultant $36B valuation represents just over half that of Uber’s. 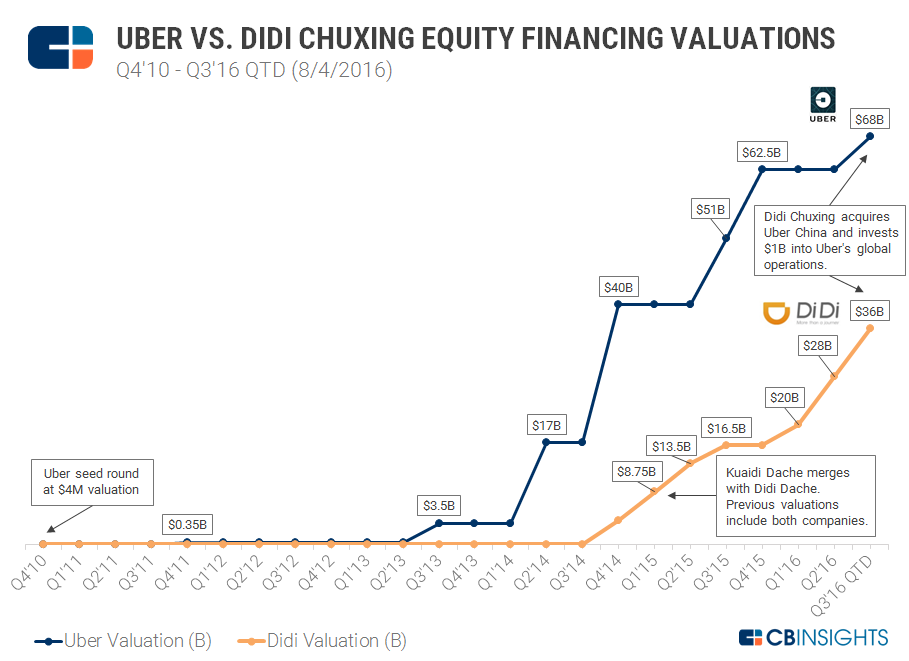