Research Brief
1834
William Hsu of Mucker Capital compares eBay to Uber to find out if Uber is really worth $40B.

The following is a guest post by William Hsu (@willhsu), Co-Founder and Managing Partner at Mucker Capital (@muckercapital).

Uber’s stratospheric valuation has joined “the weather” as the conversation topic of last resort at awkward dinner and lunch meetings. Without any hard numbers or rigorous analysis, I’ve alternatively played the role of brainless cheerleader and green-eyed skeptic – neither of which has convinced people that I’m a thoughtful and intelligent human being. So today, I’m going to try something different: I’m going to crunch some numbers and reach an independent opinion about Uber’s $40B valuation.

Now among the world’s most iconic Internet companies, Uber is often compared to eBay circa 2000. As the original marketplace company, eBay has a similar business model, scale (billions in net revenue) and more importantly, network effect driven hyper growth. For this analysis, eBay will play foil to Uber.

Comparing the revenue growth of eBay from 1999 to 2003 to that of Uber today, we see an eerily similar trajectory. Impressively, eBay accomplished this growth in an era with 1/100 of today’s internet penetration and engagement. The Uber net revenue numbers, which come from modeling I did a few weeks back, show that  Uber is growing at a faster rate than eBay at around the same scale.

eBay went public on September 1998, officially launching the dot-com bubble, and it held tough as the NASDAQ dropped by 80 percent (~5000 to ~1000). Now, the valuation for eBay is calculated using December public market capitalization + debt – cash (finance geeks calls it enterprise value), while Uber’s valuation is based on linear extrapolation of its pre-money valuation for December of same year. Given that the public market was significantly depressed from 2001 to 2003, we have to be careful about valuing Uber based on eBay’s early 2000s numbers; however, it does give us an absolute worst case scenario, which I like as a “glass half empty” kind of guy.

The above chart derives valuation multiples for each company using enterprise value divided by last twelve month revenue. Clearly, Uber’s net revenue valuation multiple is anywhere from 5x to 2x higher than eBay’s at any time EXCEPT for 1999. In December 1999, eBay had only been public for three months, and thus its valuation arguably hadn’t stabilized. Even at the height of the bubble in 2000, Uber’s valuation multiple is 3x (2014 Uber vs. 2000 eBay) that of eBay.

So easy call, right? Uber is worth about half of its value?  Not so fast. The incredible thing about Uber is how much it is growing while at the same scale as eBay. From 2013 to 2014, Uber grew about 30 percent faster than eBay, and if there is one thing that the public market loves, it’s growth.

If we use next twelve month multiples instead for both eBay and Uber, the numbers start to make sense. Yes, Uber has a higher multiple than eBay, but it is also growing faster at around the same revenue scale. In fact, if I don’t discount eBay’s valuation multiple in 1999 – and view it as the result of the incredible growth (almost 5x from ‘98 to ‘99) – Uber’s ~30X revenue multiple is reasonably supported by the 3X growth projection for 2015.

If Uber hits the $10B gross monthly revenue run rate that it has promised investors, Uber is absolutely worth $40B, and perhaps even more.

Of course, the story doesn’t end here.  Let’s make sure we learn from eBay’s history. 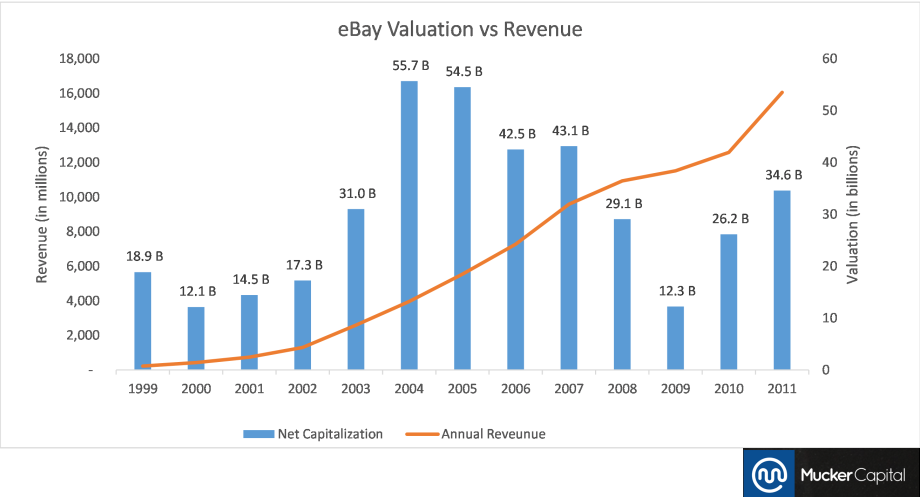 From 1999 to 2005, at the height of eBay’s valuation, revenue increased by 25x while its valuation only increased by 3x.  Uber cannot and will not grow at 3x year over year forever; in fact, it probably has at most two to three years of that growth left, even for its most optimistic proponents. At roughly 2x year-over-year growth, which eBay experienced from 2000 to 2005, the company’s valuation did not increase correspondingly. If you believe that we have another bubble bursting on the horizon, then there is very little upside left in Uber as an investor. And in the long run, as growth normalizes to below 50 percent, multiple compression will overcome revenue growth, in which case Uber might come to be worth less than $40B.

Unless Uber can make 3x growth a repeatable annual occurrence through aggressive international and category expansion (i.e. becoming the logistics infrastructure of the world), the big money to be made by investors has already been made.  Uber is very much worth $40B – I’m just not an investor at that price.

William has spent his career as both an entrepreneur as well as an executive of a Fortune 100 company.