Uber‘s newly announced strategic partnership and investment by Times Internet, the digital arm of India’s largest media conglomerate, comes after a slew of bad publicity in the country for the transportation tech company. Much of the negative PR and regulatory scrutiny came as the result of a rape accusation against an Uber driver on December 7th, 2014. which led to the company being banned in the country’s capital, New Delhi.

Given India’s importance to Uber’s global aims, the investment and associated strategic partnership by the country’s largest media company is notable. The investment/partnership was described by Satyan Gajwani, the CEO of Times Internet, as one that will:

“help bring affordable, convenient, and safe transportation to every consumer in India while developing a real spirit of micro-entrepreneurialism for thousands of drivers.”

Of course, Uber’s woes – regulatory, PR and competitive have led some to question whether this is Uber cozying upto a prominent media outlet to improve its brand or as some have more directly suggested – buying favorable press. As one unnamed ‘prominent tech investor in India’ explained to The Financial Times,

“Times Internet isn’t really taken that seriously as an internet player here, but they are still easily the most powerful news media group in the country. Since Uber have all sorts of regulatory challenges, tying up with the Times of India can win them favourable coverage, both with customers and politicians.”

For context, The Times Group is a juggernaut in India. It is the largest mass media company in the country. Its major brands include The Times of India, the world’s largest English language newspaper as well as The Economic Times, India’s largest financial daily. The group also has a significant online media presence reaching 150 million monthly active users on digital platforms (web/mobile).

So we analyzed CB Insights sentiment data to see just how important The Times Group’s media outlets could be to Uber.

Sentiment analysis of all of our India-based press coverage of Uber since May highlights a precipitous decline in news sentiment after the December incident. But unlike the US where Uber’s sentiment has bounced back after some woes in late 2014, Indian press sentiment towards the firm has remained steadily negative. The company continues to battle questions around its driver screening and its ensuing ban in the country. 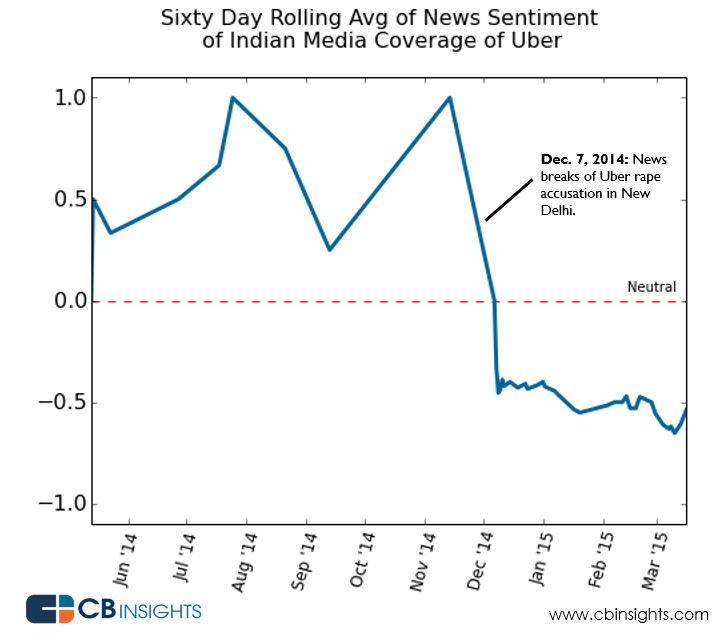 It will be interesting to see if The Times Group investment results in sentiment for Uber improving over time and if they can shake the negative prevailing commentary which surrounds the company.

We’ll continue to track Uber’s sentiment within India and will provide an update  in a few months.

To track Uber, its competitors and investors like The Times Group, login to CB Insights or create a free account below.