Recent mega-rounds by GrabTaxi and Didi Kuaidi have pushed rival Asian car-hailing apps ahead of Uber by combined total funding.

The car-hailing space has led the on-demand economy boom. And Uber faces stiff competition in Asia from a group of taxi-hailing apps backed by Japanese telecom giant, SoftBank.

As recently as two weeks ago, Uber had actually raised 62% more than the three SoftBank-backed taxi apps (Didi Kuaidi, Ola, GrabTaxi) combined. Uber has built its war chest in part by courting corporate investors in India and China, including Baidu, China Life, and Times Internet (Times of India Group).

But things are moving fast on the funding front. In the last couple of weeks, there was a $200M investment by Coatue Management into GrabTaxi and a massive $2B private placement to Chinese Uber rival Didi Kuaidi. On the back of those deals, the three SoftBank-backed apps have now combined to raise $5.6 billion, or 2% more funding than Uber. 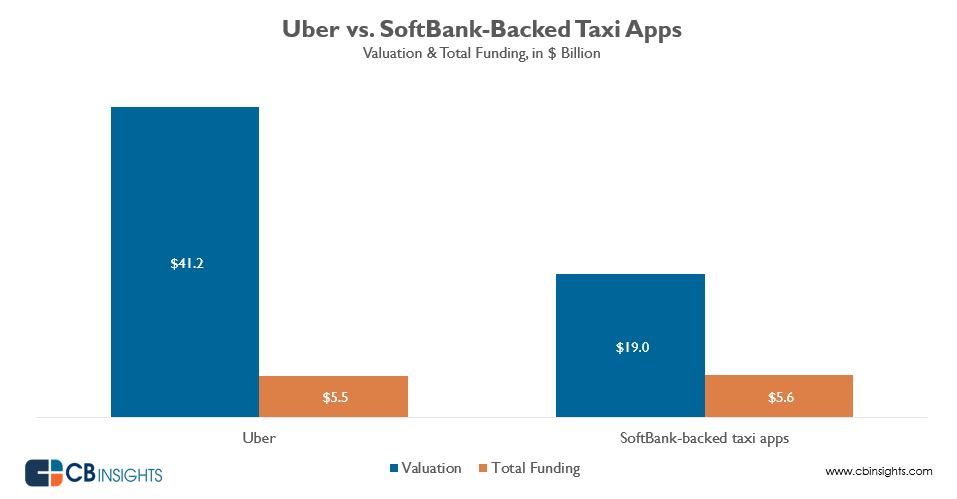 Of course, this can all change very quickly. Uber is reportedly planning to raise an investment that could reach $1B from Chinese fund manager Hillhouse Capital. Interestingly, Hillhouse has previously invested in Asian taxi-hailing apps Kuaidi-Dache and GrabTaxi.

Related: Uber Has Raised Nearly As Much Funding As All Other US On-Demand Startups Combined

Looking for more on-demand funding and exit data? Sign up for the CB Insights Venture Capital Database free below.