All of the private companies in our infographic are based in the Emirate of Dubai. Collectively, these companies have raised over $1B.

The United Arab Emirates (UAE) is making headway as a significant incubator of technology startups. In fact, in recent years two unicorn companies valued at over $1B each were created in the UAE: the e-commerce website Souq.com (acquired by Amazon in 2017) and the ride-hailing platform Careem (acquired by Uber in 2019). Another UAE-based e-commerce company, Noon.com, obtained $1B in funding in November 2016.

UAE-based tech startups are raising more money across more deals than ever before.

Using the CB Insights database, we identified the 10 most well-funded tech startups in the UAE each year since 2015.

The largest single funding round to a UAE-based startup since 2015 goes to e-commerce company Noon, which raised a $1B round from investors Mohamed Alabbar and the Public Investment Fund of Saudi Arabia in 2016. 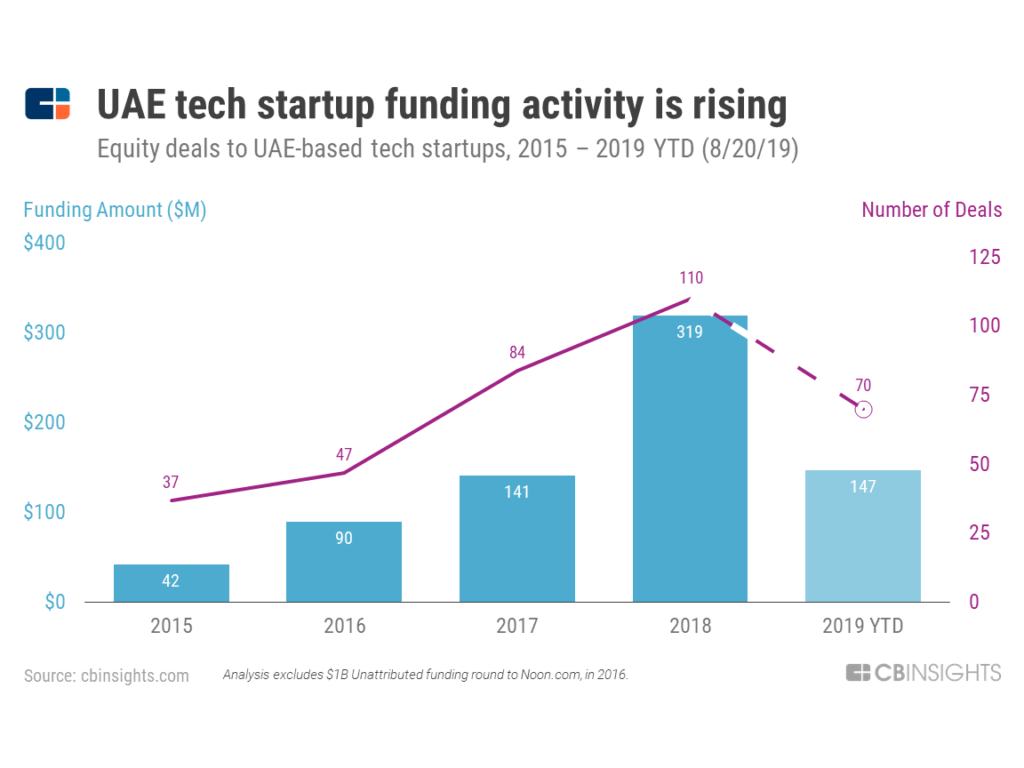 In 2018, the UAE-based real estate website PropertyFinder raised a $120M mega-round from US-based General Atlantic and Sweden’s Vostok New Ventures. PropertyFinder is the second most well-funded tech startup in the UAE as of 8/20/19.

The UAE’s Most Well-Funded tech startups

Below, we mapped out the 10 most well-funded tech startups in the UAE each year since 2015. We only included companies that have disclosed new funding since 2016. Dead or acquired companies are excluded. 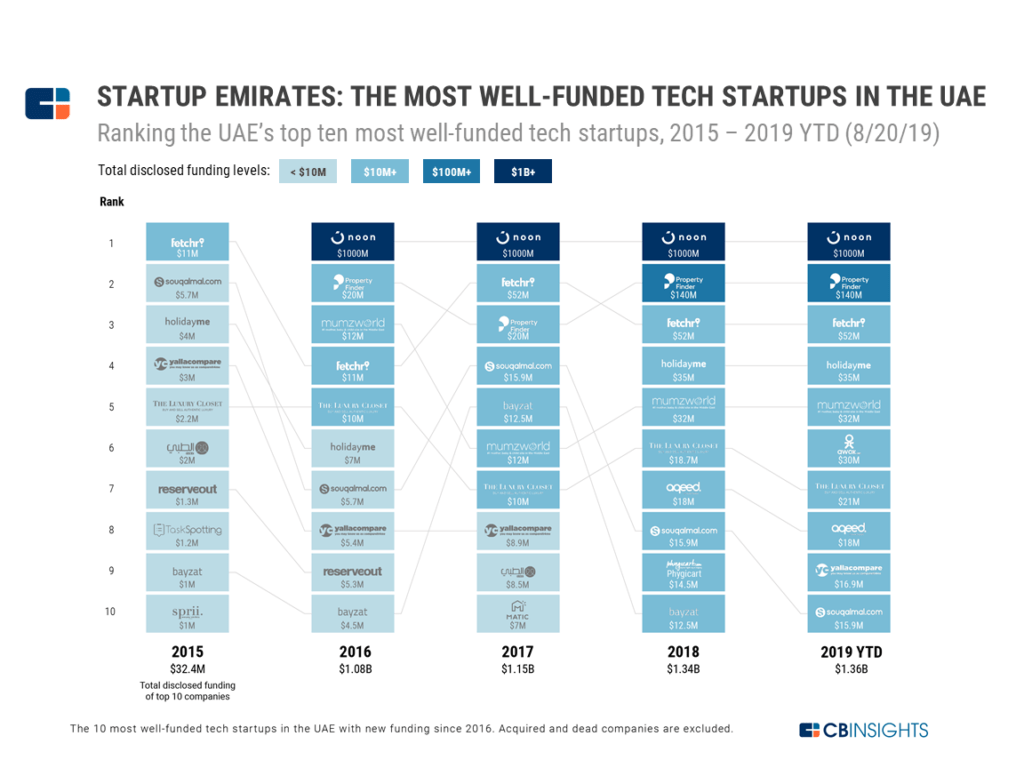 The UAE’s rise within the global tech startup ecosystem is in part evidenced by the fast run-up in total disclosed funding raised by the country’s 10 most well-funded tech startups over the last five years. The most well-funded company ranking has shifted over the past few years as investors continue to pour more money into the biggest and most promising startups in the UAE.

Key insights about these companies:

What’s next? (the UAE’s next unicorn)

All of the top ten most well-funded tech startups in the UAE are worth keeping an eye on. However, one company stands out as a rising star to watch.

Fetchr is the third most well-funded tech startup in the UAE, and the company has been dubbed “the next desert unicorn.”

In May 2017, Fetchr raised a $41M Series B round led by US-based New Enterprise Associates. Fetchr has raised $52M across four rounds of funding, and the company will reportedly raise a large Series C round in 2019.

Fetchr delivers packages to a location by using the receiver’s smartphone GPS instead of an address. Much like a ride-hailing app or a food delivery service, Fetchr’s algorithm matches couriers with appropriate pick-up and drop-off points.

In areas where there are no street names or building numbers, package delivery is challenging and in some cases impossible. Fetchr is capitalizing on two trends to help solve the “no address” problem: growing levels of smartphone penetration, and the rapidly expanding e-commerce industry in the region.

Fetchr currently operates in the UAE, Saudi Arabia, Egypt, and Bahrain, but a new funding round could be used to expand outside of the Middle East.

Fetchr’s entire technology platform is based on Amazon Web Services (AWS). In July 2019, Amazon launched the first AWS Region in the Middle East to provide cloud coverage for its expanding Middle East client base. Fetchr could be a possible acquisition target as Amazon moves further into the region and looks to expand e-commerce services in other emerging markets.