From carried interest to cybersecurity to tech talent concerns, VCs analyze the impact of Trump's victory on startups and tech.

The US is the center of the global venture capital and startup ecosystem, and US-based investors have become increasingly global in terms of their reach into private markets in Asia, Europe, and elsewhere.

The decision yesterday by US voters to elect the underdog Republican candidate Donald Trump as president will no doubt have significant effects on startups in tech, biotech, and private markets in general.

Here are the top concerns and likely impacts, according to early views we rounded up from VCs, investors, and analysts, with our own data for context. We assembled a similar roundup of investors’ thoughts and concerns following the Brexit vote, and more than one investor noted the parallels between the Brexit and US presidential votes for private markets.

US vs. global funding and deals

But first for context, here’s what the relative weight of the US is in terms of overall investment in VC-backed companies around the world. The US drives a significant share of activity and dollar funding and is also home to 96 of the 174 private unicorn companies valued at $1B+, so any major change in the relative weight of the US in this picture would mean a significant shakeup.

More than half of deals to VC-backed companies globally go to startups based in the US (54% in Q3’16). 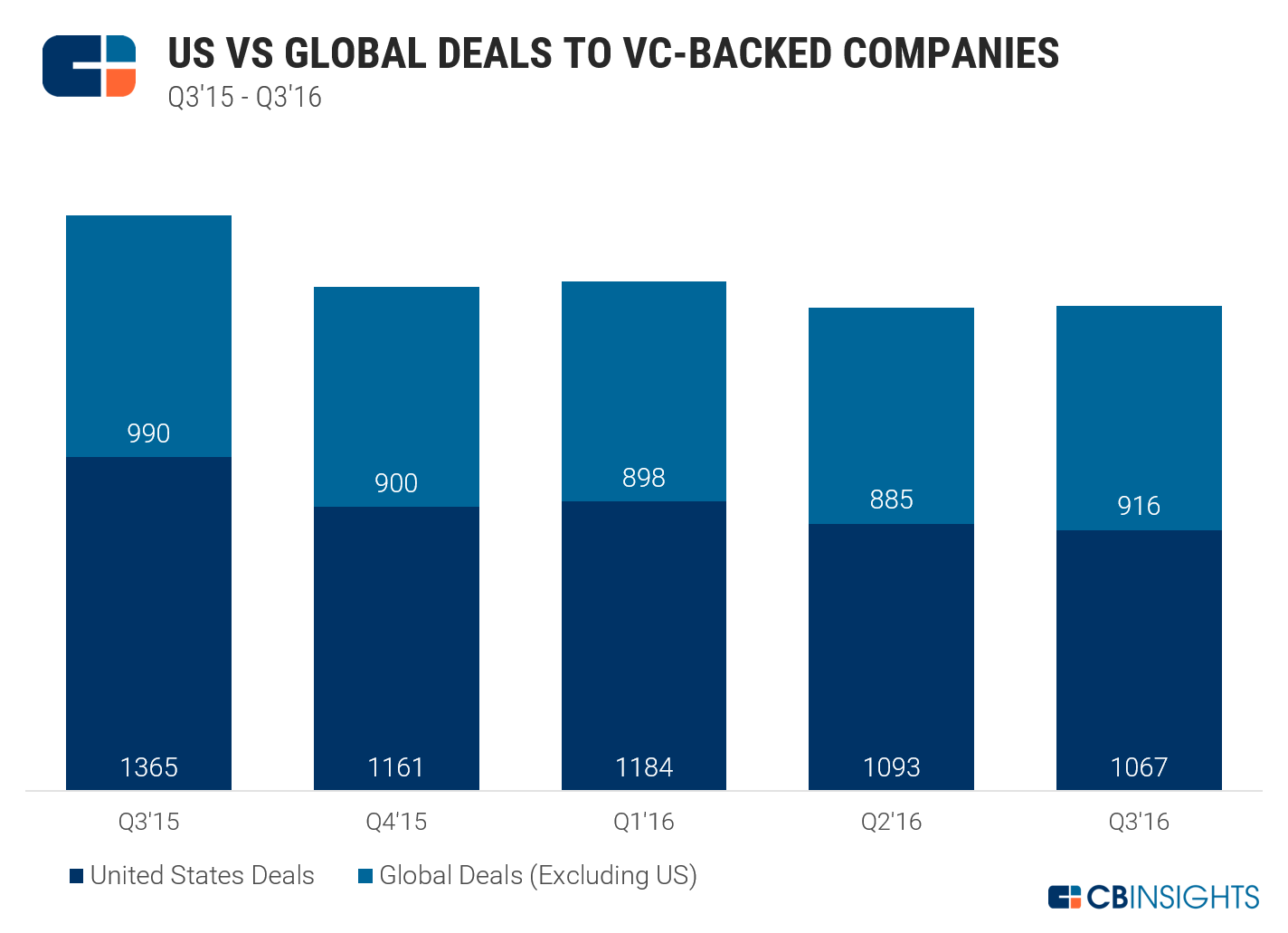 In terms of dollar funding, the proportions are even more slanted toward the US. In Q3’16, US-based VC-backed companies drew $14B in funding, while companies elsewhere drew $10.1B. 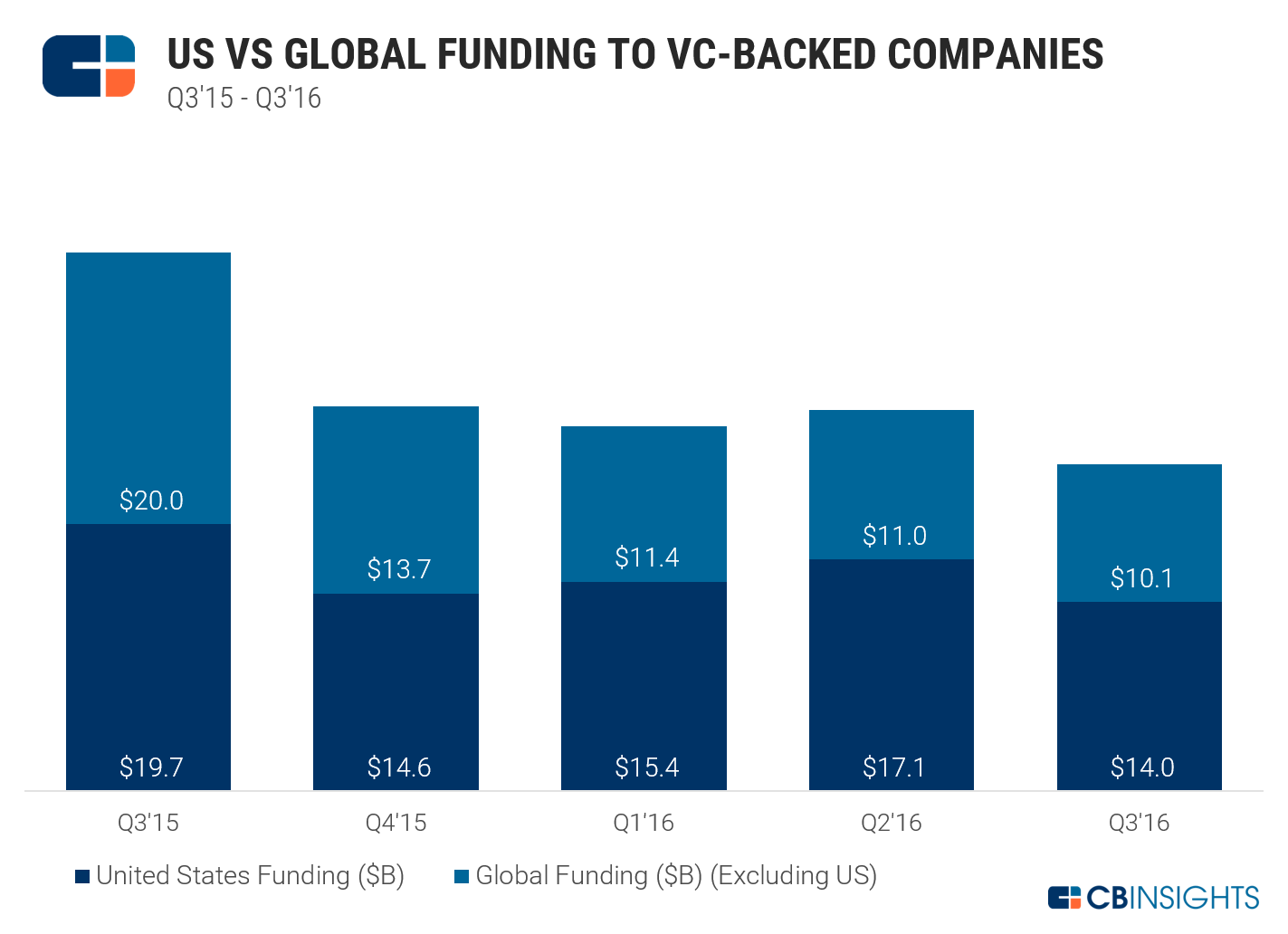 Startups—Keep calm, carry on: All that said, some prominent voices are pointing out that any storms in the broader economic and political picture do not mean that innovation and successful startups won’t continue to come out of the ecosystem. Fred Wilson of Union Square Ventures pointed out in a post “What Does Trump Mean For Startups?” that some of the more successful startups have emerged from times of financial turmoil, and that savvy investors will continue to hunt for the best startups, and see perhaps even more opportunity in times like these (he wrote much the same at the time of Brexit).

“I am certain that USV will continue to invest capital in interesting startups,” wrote Fred Wilson. “While the financial markets may be in for a tough time, possibly a prolonged tough time, there is no correlation between startup success and strong financial markets. And those investors who understand that will act accordingly and be rewarded over the long term for doing so.”

We’ve written about “startup roaches,” i.e. major startups that emerged from the financial crisis of 2008 and 2009. Mark Suster of Upfront Ventures opined that only the worst financial market meltdown, i.e. a Black Swan type event, would truly impact VC.

Meanwhile, Charlie O’Donnell of Brooklyn Bridge Ventures compared the current juncture to 2008 and wrote his portfolio companies about how uncertainty always puts a chill on VC markets, but that innovation does win out—if companies can weather adverse conditions.

“In 2008, I tried to fundraise for my startup the week that Lehman Brothers went under,” Charlie O’Donnell wrote in an open letter to his portfolio. “You can imagine how well that worked out. Basically, VCs told us that they were going to wait and see how the election turned out—and things didn’t really thaw out until the following September. Extreme uncertainty slows the VC market to a crawl—that’s what I learned.  We didn’t get a bubble, but we got a really tough year fundingwise and that’s what I’m expecting. Over the long term, innovation prevailed and 2008 turned out to be a great year to have a 1-3 year old company if you could make it through the next year.”

Biotech rally: Because Hillary Clinton made drug price reform a focus in her campaign, the Trump victory sent biotech stock prices up. In addition, biotech is likely to be boosted by the defeat of Prop 61 in California, which would have prohibited state agencies from paying more for medications than the price paid by the US Department of Veterans Affairs.

“Trump is unlikely to focus much on drug pricing and unlikely to really reform any Medicare particularly with GOP Congress against this,” wrote RBC biotech analyst Michael Yee in a Wednesday research note.

That said, Trump’s stance is mostly a question mark, and he has at times advocated for more generic drugs and allowing Medicare to renegotiate drug prices. Biotech giants are among the top investors in life sciences startups and their financial soundness certainly has an impact on their capacity to do M&A and invest in private companies.

The passage of ACA created a major shakeup attracting entrepreneurs to start new digital employer and consumer health insurance brokerage startups and new tech-enabled health insurers. Trump has made the repeal of the Affordable Care Act a cornerstone of his campaign. Insurance tech startup Oscar commented at the CB Insights fintech conference that it would be difficult for Trump to actually do so given the number of people now insured under the program but health insurance startups have much at stake in whether Trump dismantles ACA as it currently stands.

One concern is fallout on the tech industry from a more hardline stance toward immigration. Changes in immigration law or perceived unfriendliness toward immigrants, particularly from prominently Muslim nations, could have an impact on the US tech and healthcare industry’s ability to attract talent.

On Bloomberg Gadfly, tech columnist Shira Ovide noted that two-thirds of Silicon Valley workers in math and computer fields were foreign born, as were 51% of the founders of $1B+ companies.

“[Trump’s] views certainly make it unlikely that one of the tech industry’s top policy agenda items for years—an expansion of the H-1B visa program for skilled foreign workers—will happen soon.”

One prominent Trump backer is Peter Thiel of Founders Fund, who congratulated Trump on his victory the morning after the election. He has spoken out about immigration policy saying it is not to be taken literally in terms of walls and checks on Muslims, but instead as an approach that will be more rational. The actual policy remains to be seen. In October, in widely publicized statements at the National Press Club in Washington DC, this is what Thiel had to say:

“I think one thing that should be distinguished here is that the media is always taking Trump literally. It never takes him seriously, but it always takes him literally. … I think a lot of voters who vote for Trump take Trump seriously but not literally, so when they hear things like the Muslim comment or the wall comment, their question is not, ‘Are you going to build a wall like the Great Wall of China?’ or, you know, ‘How exactly are you going to enforce these tests?’ What they hear is we’re going to have a saner, more sensible immigration policy.”

Cybersecurity will see more investor interest: The category arguably most likely to benefit in the immediate aftermath of the election is the cybersecurity industry. While it was widely believed by investors to be an area that was overfunded, it could now become an area of renewed interest, given the highly publicized hackings ahead of the election. 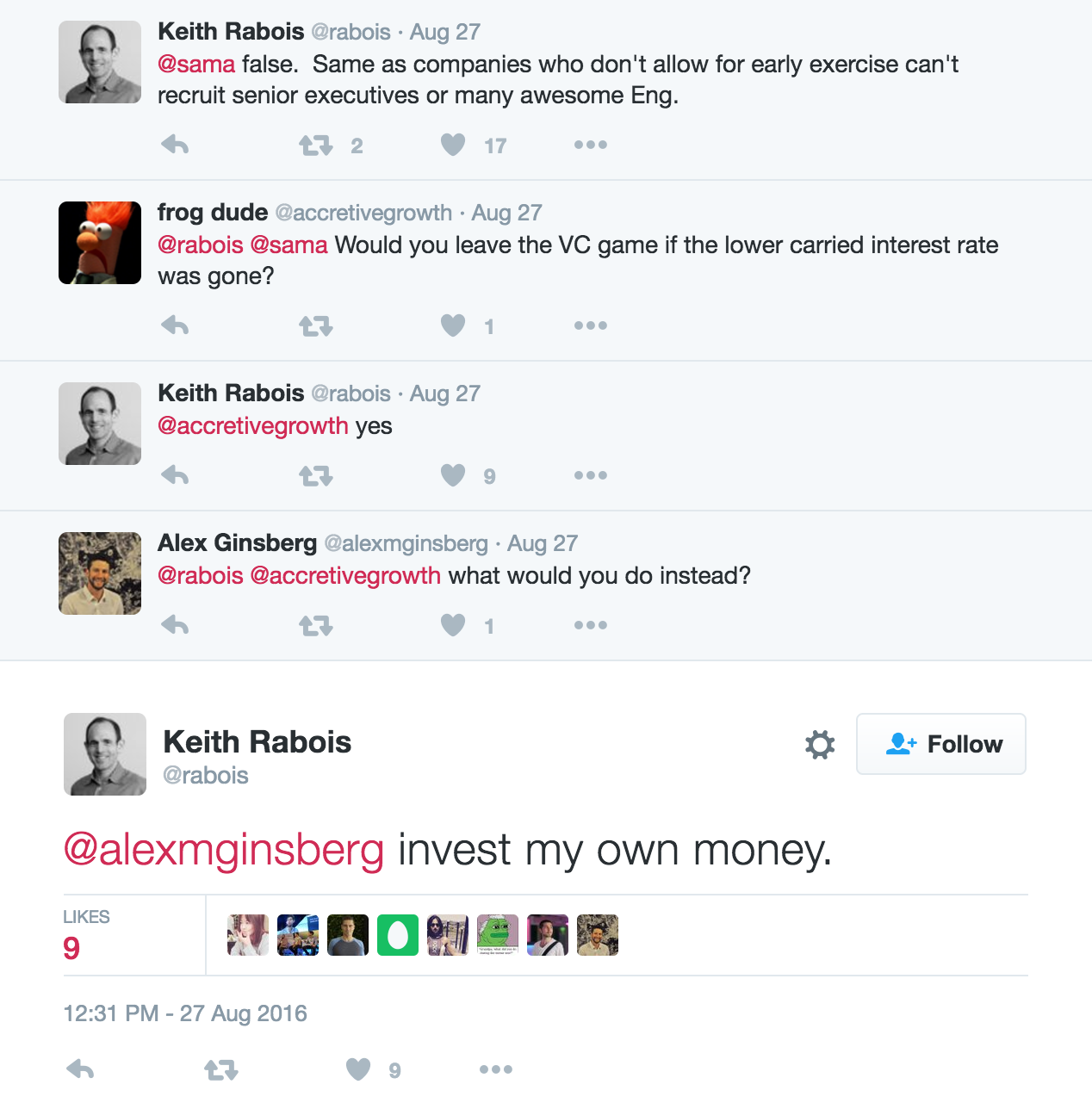 In an informal poll of our 200K+ newsletter subscribers, we asked whether or not investors in private markets would follow Rabois and quit investing if carried interest rules changed. Thirty percent said they would join Rabois, but 70% said they would stay in the game. 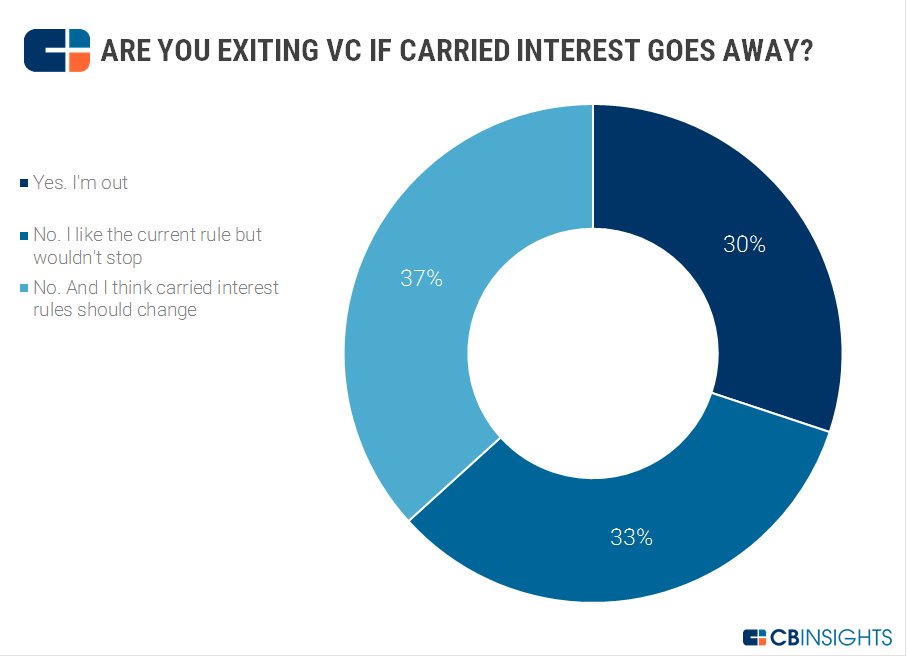 Interest rate freeze? Super-low interest rates have been one of the drivers of the surge into private market investing that peaked in mid-2015. A large contributor to this trend was the rush of mutual funds and asset managers and hedge funds—so-called crossover investors—into the private markets. Low interest rates contribute to this trend, as these large institutional investors hunt for returns wherever they can get them, and will tolerate the risk of VC-type investments if returns are depressed elsewhere. The US Federal Reserve Bank under Janet Yellen was expected to raise interest rates this year, but uncertainty around the economic policies of a Trump presidency have cast doubt on that, according to an analyst quoted in the WSJ.

“The Yellen Fed hates uncertainty, and falling stock prices, and tends to react to both by not doing what it had previously planned to do,” Pantheon Macroeconomics chief economist Ian Shepherdson said in a note to clients Wednesday morning. “We aren’t yet changing our formal forecast numbers, but as of right now the chance of a December hike probably is no more than one in three.”