Trucking tech startups are on track for their first billion-dollar year in cumulative funding.

Amid the overall influx of capital to both auto tech and supply chain & logistics tech as a whole, it’s no surprise that trucking tech startups are also drawing a rush of investor interest. Annual deals and funding dollars to trucking tech startups hit a record high in 2016, with investors deploying $742M across 59 deals. The first half of 2017 has seen sustained momentum in the space, with investment on pace to reach fresh highs in both deal and dollar terms.

Using CB Insights data, we examined investment activity from 2013 to 2017 year-to-date in the trucking tech space.

We define trucking tech broadly as companies developing technology-enabled services and products focused on the freight trucking industry, such as trucking-oriented marketplace platforms, fleet management solutions, onboard monitoring and tracking systems, and trucking-focused ERP systems. Excluded from our analysis are primarily industrial companies and broad software solutions without a significant trucking emphasis. Warehousing solutions and robots are also treated separately, as are last-mile logistics and companies working on vehicle electrification.

An uptick in larger financings has buoyed 2017’s funding figures, including a $156M third tranche of Chinese logistics provider Huochebang‘s Series B led by Baidu Capital. Huochebang raised a substantial $306M in total from Q2’16 to Q2’17. The US has also seen some notable larger deals in 2017, including Peloton Technology‘s February $60M Series B (led by Omnitracs) and Transfix‘s July $42M Series C (led by NEA). 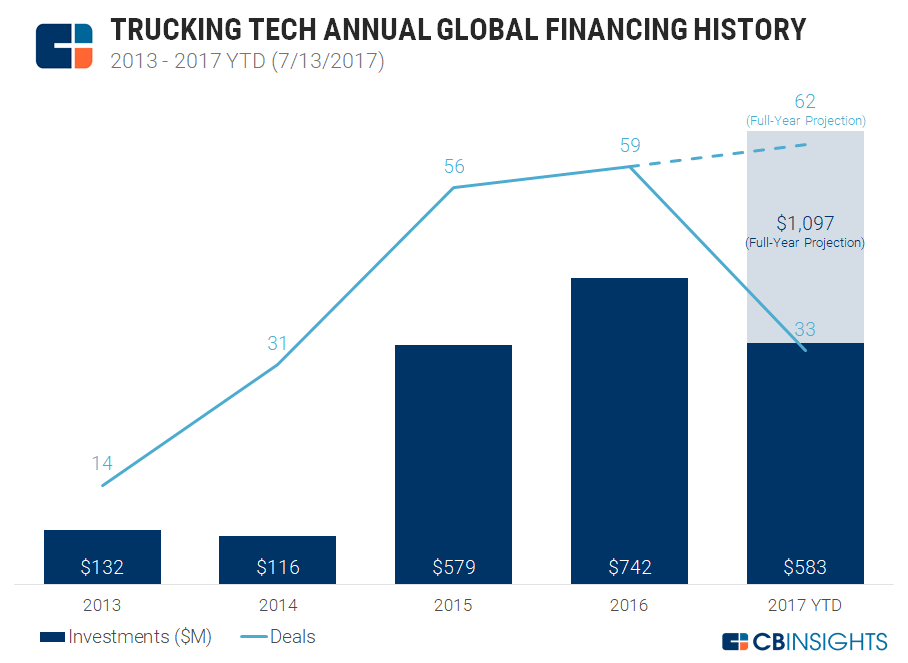 Deal activity slipped through the latter half of 2016, but has seen two sustained quarters of 16 deals apiece through H1’17. Deal activity has remained above 11 or more deals for six consecutive quarters. Quarterly funding dollars have also topped $130M every quarter since Q2’16, after eclipsing that mark just once in the quarters prior.

Other notable deals in Q1’17 include G7‘s $45M Series D and BlackBuck‘s $40M second Series C tranche. Despite the decline in deal activity in Q4’16, disclosed quarterly funding reached an all-time high. That quarter’s funding dollars were heavily driven by mega-rounds in China such as Huochebang’s $115M financing and Yunmanman‘s $110M Series D. 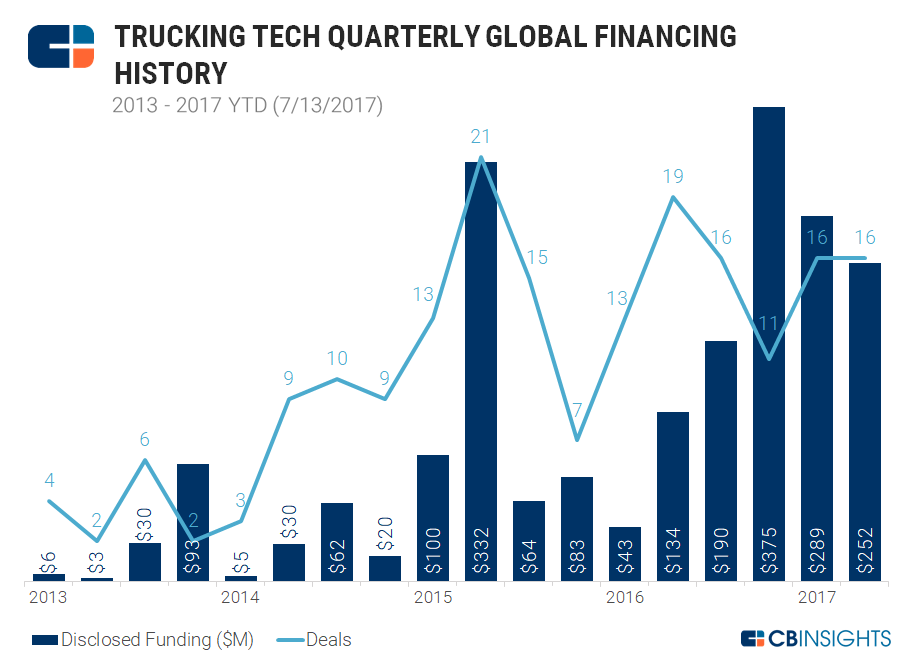 Early-stage deals (seed & Series A) have featured prominently in the burgeoning trucking tech field, accounting for over 60% of annual deal activity from 2013 through 2016. 2017 to date has shown potential maturation with a more balanced picture emerging, as early-stage share has fallen to 45% of all deals. The top early-stage deal in 2017 YTD was a $10M Series A investment to Madrid-based OnTruck and a $10M Series A investment to India-based Fortigo Network Logistics.

Mid-stage (Series B & C) deal share has jumped from 20% in 2016 to 30% in 2017 to date. Late-stage (Series D+) deals have also featured more prominently in the year so far, including some of the larger financings referenced above. 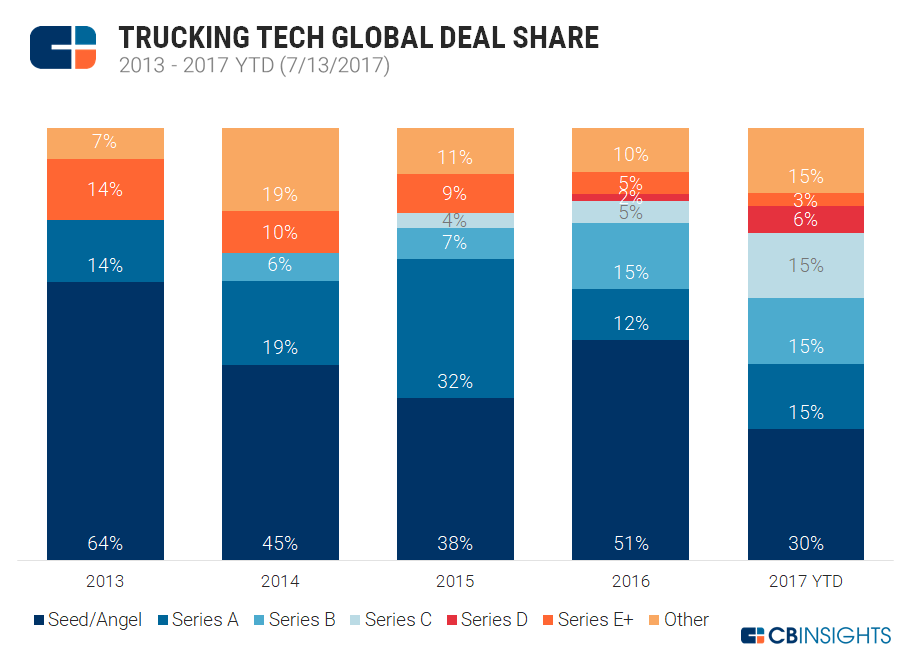 Want more data about trucking tech activity? Log in to CB Insights or sign up for free below.