Genomics has the potential to change medicine. These are some of the most important trends to watch.

In 2003, the Human Genome Project was completed after fully sequencing and mapping the genetic code of a human being. While that project cost $3B, the cost to sequence a genome has fallen precipitously, to approximately ~$1000 today. This has caused a dramatic shift in the field of genomics as new business models emerge, technologies develop, startups launch, and genomic data grows.

Thanks to this, we’ve seen more and more chatter about genomics and genetics. We mapped discussion using our Trends tool, which analyzes millions of media articles to track emerging trends in innovation and tech. We’re also starting to see more publications and journals explore more nascent and specific parts of genetics, including CRISPR (gene-editing) and the microbiome. 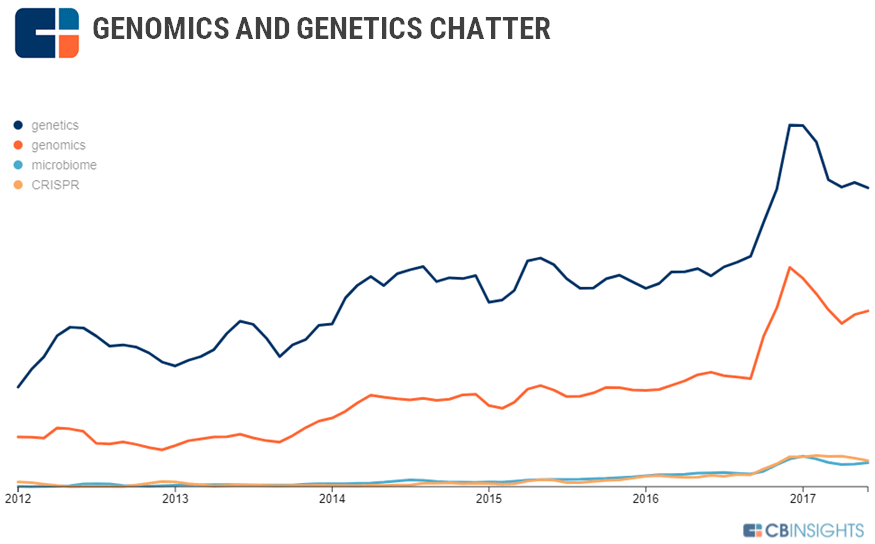 Below are a few notes on trends in the space, but more can be found in the full webinar, “Genomics: The Next Phase Of Personalized Medicine.”

Most genomics companies can be understood using two frameworks

Two frameworks can help us categorize specific genomics companies. The first framework is the genomics “stack,” that is, the steps from collecting the sample to analyzing the data. The first three steps are sample collection, sequencing, and software analysis.

Each of these steps has its own difficulties/advantages:

The second framework that’s useful is whether the company is operating to satisfy consumer curiosity or whether its applications have medical relevance. This also presents different issues ranging from regulatory burden to the ticket price of each potential customer. The most nascent area is the companies serving both applications, which I’ve called “Genotype Guided Medicine & Wellness.” This can be expected to develop as the clinical implications of genetics are better understood.

Using these two frameworks, it’s possible to start grouping companies together and comparing them based on which part of the “stack” they work in and whether they’re more consumer or medical focused. For example, companies looking at circulating DNA in blood-based diagnostic tests to detect early signs of cancer tend to work across all parts of the stack while focusing on the medically relevant part of the Venn diagram. We dove into more of these examples in the webinar. 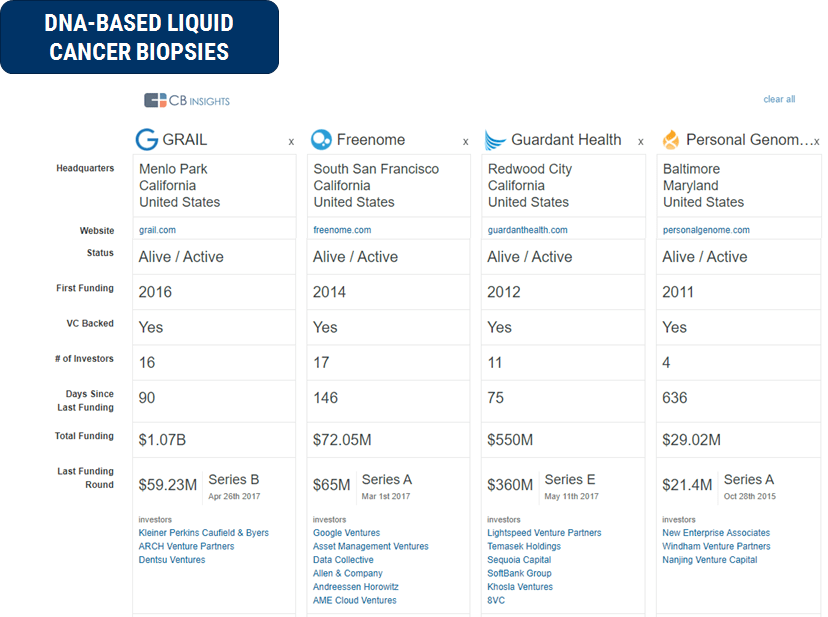 Excitement around genomics helped pull in a lot of new seed funding for companies in 2015 and 2016. 2017 however has seen a pullback, and more focus on mid- to late-stage deals, especially into more specific applications of genomics (cancer detection, family planning, etc.) Funding in 2017 has already broken the total for funding last year, as a result of a few mega deals. Large exits are also becoming somewhat more frequent and helping provide a pricing benchmark for companies in the space, including the billion-dollar exits of Foundation Medicine and Ambry Genetics.

One of the reasons more money is flowing into genomics is that we’re beginning to build massive datasets that are ready to be analyzed. Although we’re learning more about how genes are regulated thanks to this data, the findings are still in early days. Research can arrive at one conclusion, while another set of studies arrives at the opposite conclusions later. Building up the amount of genetic data we have is the first step, but understanding how those genes are expressed and interact is still largely unknown, making action on this data difficult. We’re starting to see more and more genome-wide association studies (GWAS) as well as more efforts into mapping the regulatory pathways to understand the connection between genomes and phenotype expression. 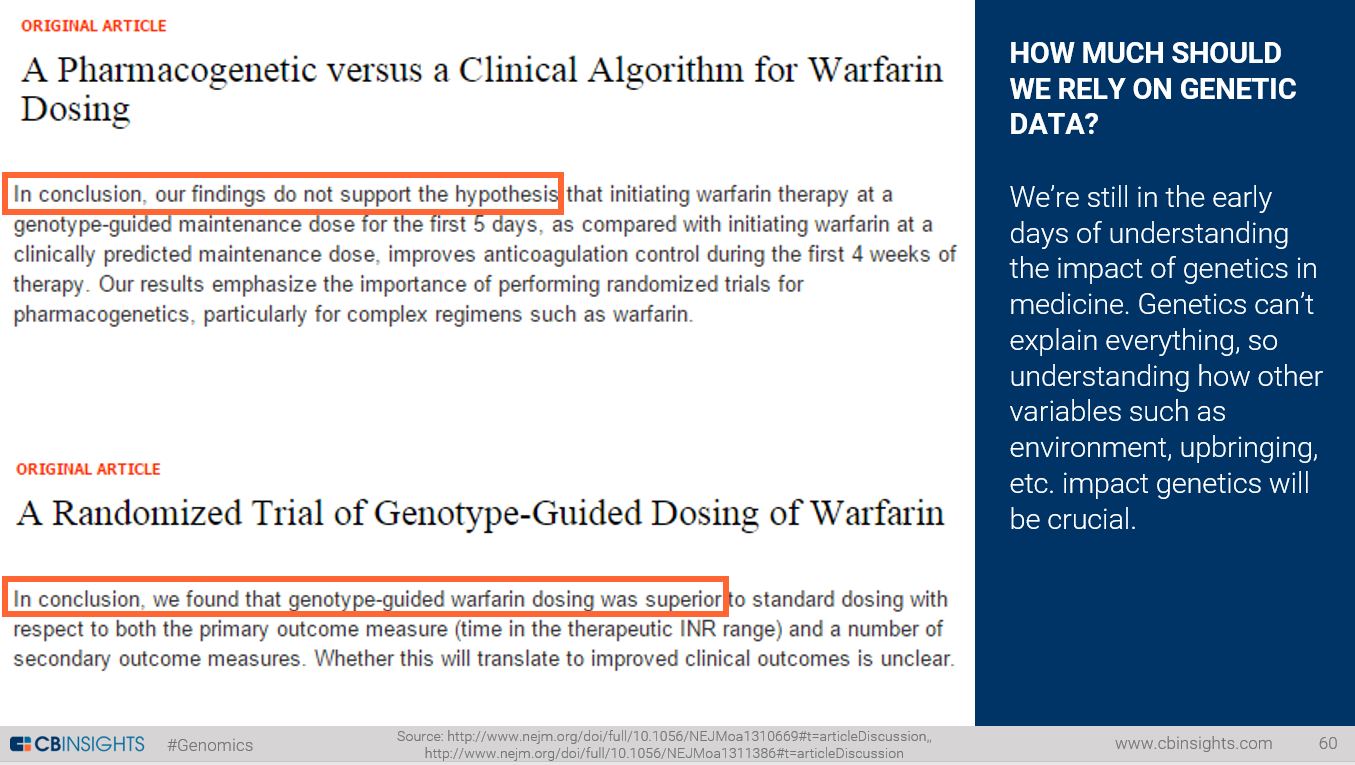 Corporates are getting more involved

As another sign of the ecosystem maturing, we’re starting to see more and more corporates get involved in the space. These corporates are not only from the healthcare side (lab equipment, pharma, etc.) but also from the tech side as well — especially since genomics is equally a technology/data endeavor as it is a biological one. Corporates have been involved in almost all of the largest rounds in the space.

Each corporate seems to be interested in the space for different reasons. Several pharma corporates have made investments or partnerships in the space for access to longitudinal genotype/phenotype databases like 23andMe, Human Longevity, etc. Roche has shown a particular interest in this area, acquiring Foundation Medicine for $1.8B and making several private market investments. Insurance companies, both from the life and health insurance side, have also begun to warm up to the idea of using genomics to encourage preventive health, with MassMutual partnering with Human Longevity and Color Genomics accepting a number of insurance plans to cover the hereditary cancer risk test if they meet the criteria.

Illumina is the most active in the space, increasing private market activity substantially in the last couple of years. They’re invested across the genomics spectrum, from new sequencing hardware to analytics platforms and companies developing new therapies using genetic data. The company is also developing products up and down the genomics “stack” through Grail and Helix, its spin-offs. For deeper discusion of corporate activity access the webinar.

When it comes to all things healthcare, government regulation plays an important part in making sure everything is safe and accurate, genomics included. In the US, one of the tough parts about genomics companies is that different parts of the operation are subject to scrutiny from different government bodies: The Centers for Medicaid & Medicare Services (CMS) for labs, the Food and Drug Administration (FDA) for kits and information, and the Federal Trade Commission (FTC) for marketing.

Regulations are constantly being updated now that the area has developed, and companies have to be aware of the new rules as they come up. 23andMe was one of the first companies in the space to sell direct-to-consumer testing and forced the FDA to reevaluate its rules (and subsequently saw the company’s value jump after some of their tests were approved). We can see the FDA impact on the company using our Trends and Enhanced Valuation tools. Recently the FDA approved a host of new tests for 23andMe, and considering it’s been 23 years since their last formal fundraise, they’ll likely be in position to raise again to scale out their new offerings.

Lots of opportunities exist as the application layer is being built

We’re starting to see the first levels of the application layer in genomics being built as new software and therapies using this information are developed. But as we go forward many new, potentially massive opportunities will emerge, including but not limited to: 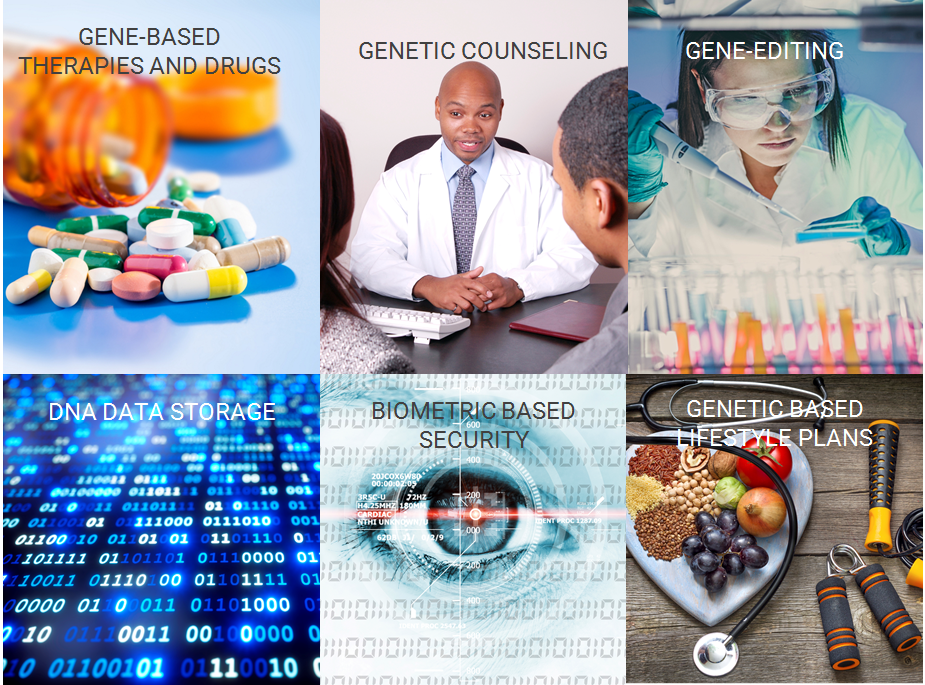