Despite a recent dip in activity, deals to travel tech startups are on pace for a fourth-consecutive high this year.

In addition to their unicorn status and focus on emerging markets, both Despegar and Traveloka Indonesia also have a well-known common investor: US-based online travel company Expedia.

In an industry that was one of the first to be disrupted by the internet, corporate and VC investor interest in the travel tech space has grown as startups continue to attack existing travel markets — and create new ones as well.

This year has been no exception: at the current pace, deal activity is on track to surpass last year’s record-breaking 316 deals, while equity funding in 2017 YTD has already nearly matched the 2016 total.

A weak Q3’17 in terms of deals contrasts with a strong first half of the year, though it remains to be seen whether this will be an aberration or longer-term slowdown.

In this research brief we cover:

Equity funding also tracks positively, with nearly $3B raised YTD, already on par with 2016 levels. This year is on track to clock in below the 2015 peak of nearly $5B, which was buoyed by a $1.5B Series E round secured by travel tech unicorn Airbnb.

At the current run rate, total funding to travel tech companies could grow by 27% from previous year, flirting with the $4B mark across a record of 326 deals.

This year’s top deals to travel tech companies include a $350M tranche of Series B funding raised by Traveloka Indonesia in July. The round, which was backed by Expedia, valued the company at $2B, making it the second most valuable tech startup in Indonesia.

For the fourth year in a row, travel giant Airbnb is claiming one of the 2 top spots for the largest deals to travel tech startups, closing a $448M tranche of Series F funding in March.

Other noteworthy deals this year include Starwood Capital’s $250M corporate minority investment in London-based Yotel, as well as Oyo Rooms‘ $250M Series D, backed by Sequoia Capital India and SoftBank Group, among others. 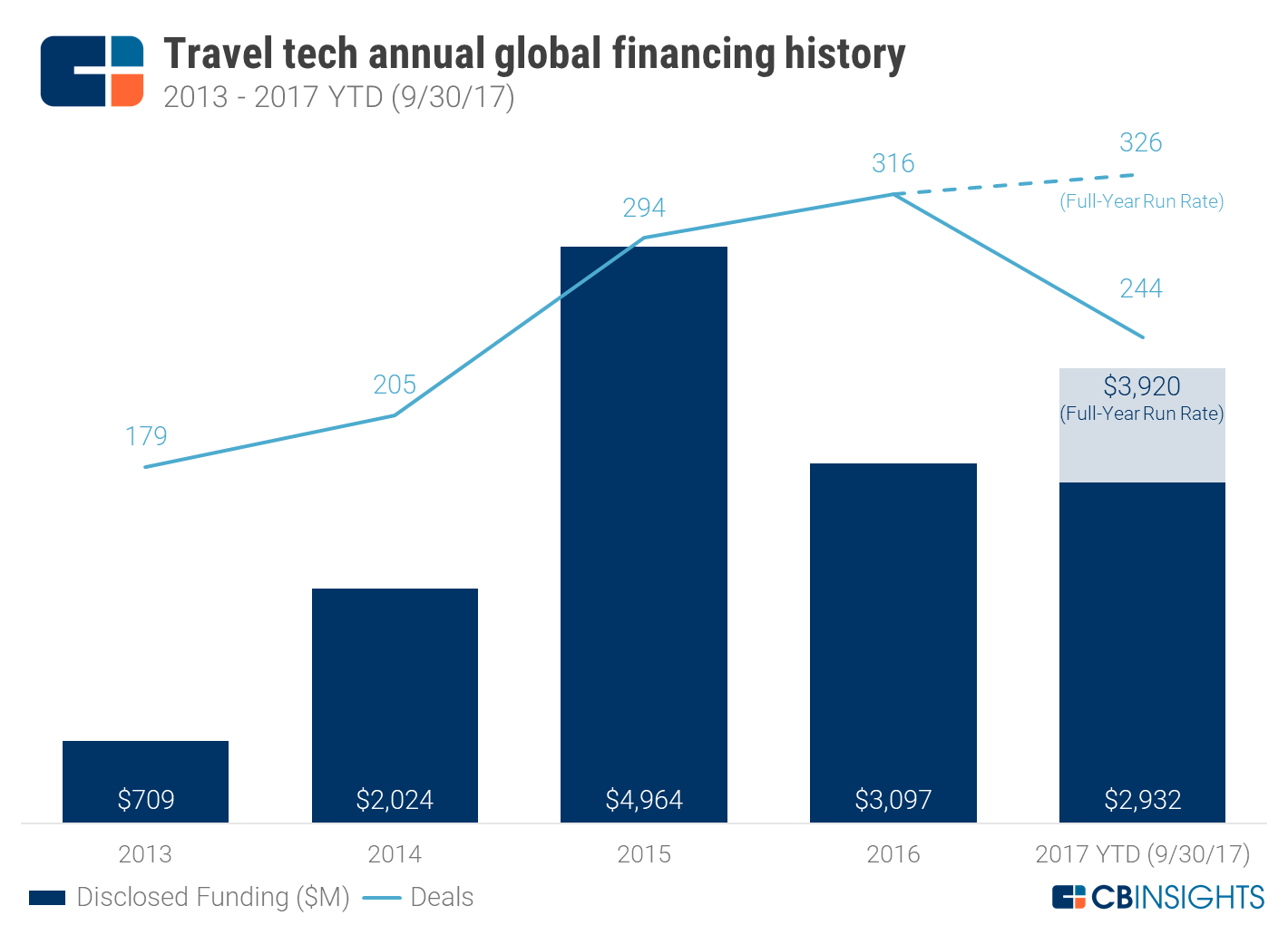 This contrasts with a solid first half of the year for travel tech deals — with 89 funding events both in Q1’17 and in Q2’17 — but is in line with the downward trend observed during the second half of the year in recent years. 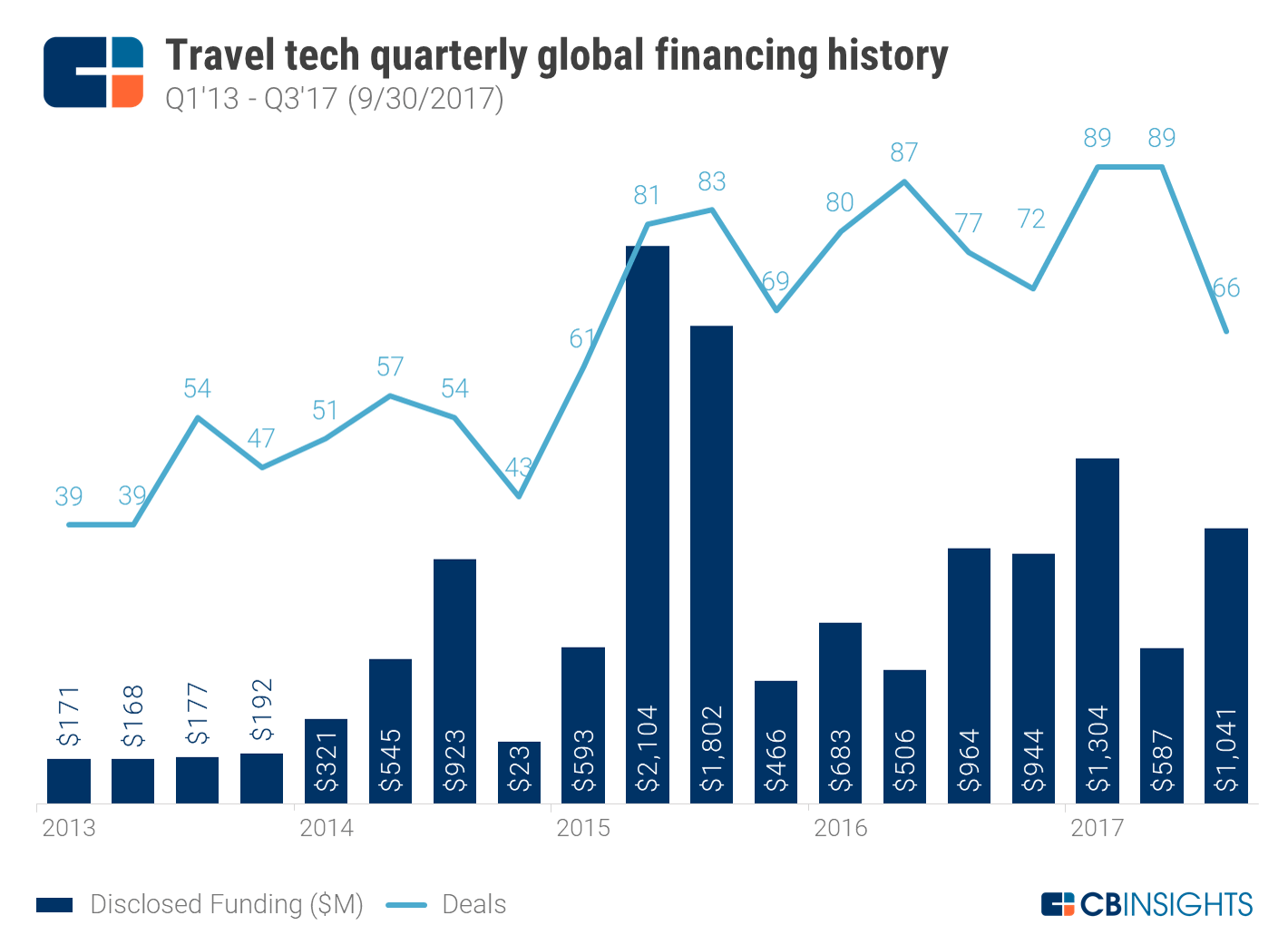 New companies continue to see funding, as the sector continues to be dominated by early-stage (Seed / Angel and Series A) rounds, which have represented over 60% of deals over the past 4 years.

Mid-stage (Series B & C) and later-stage (Series D & E+) deals combined have varied between 17% – 22% over the same period, while deals in the “Other” category have been trending up, mainly due to a rise in corporate minority investments. 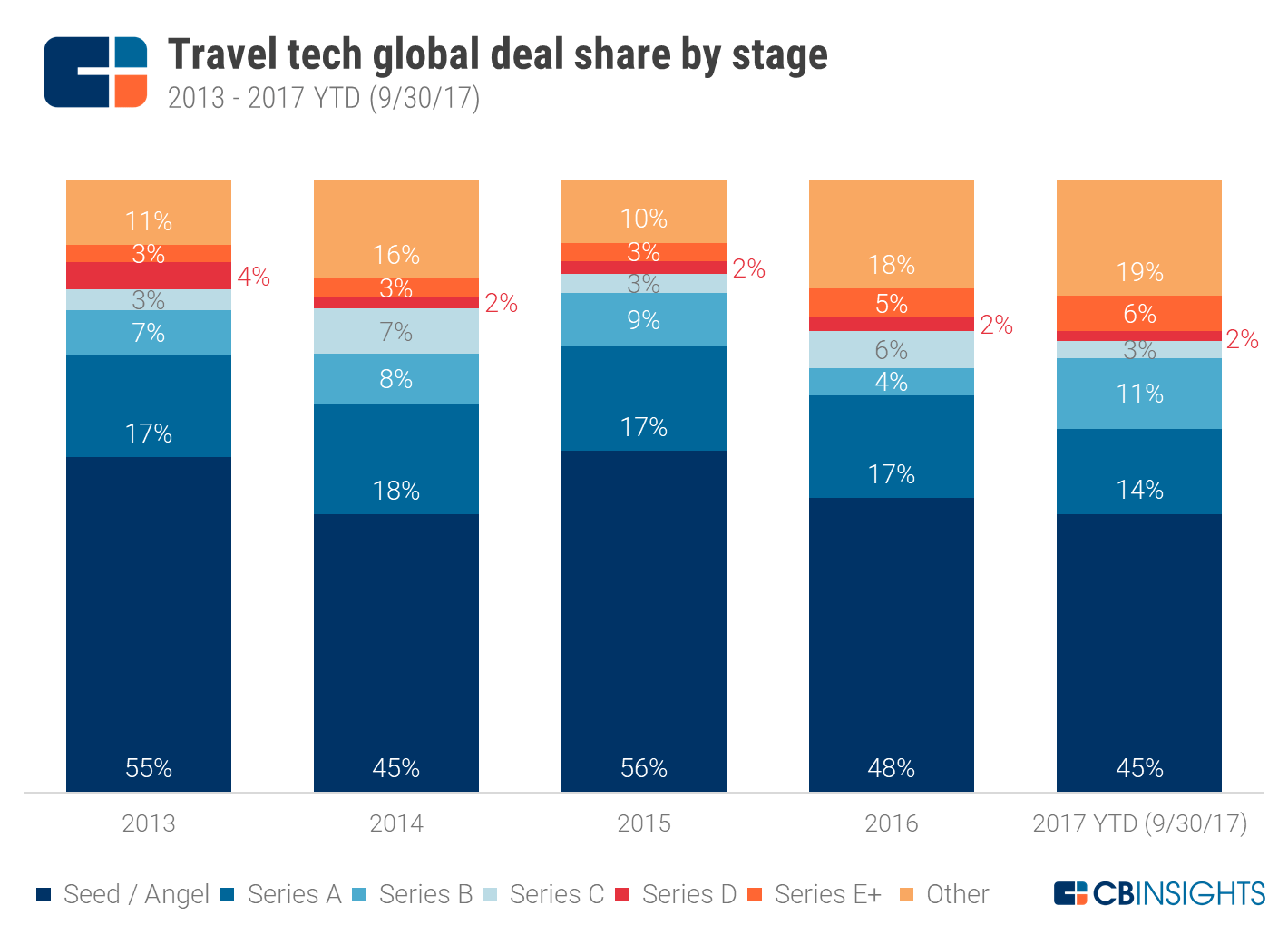