Research Brief
2610
Two of the most well-funded travel tech companies have raised over $1B in funding. The category has several unicorn companies, including Skyscanner and Tujia.

Funding to travel tech startups skyrocketed in 2015. Piggybacking off a healthy 2015, the travel tech space saw the third-highest amount of funding by quarter in Q1’16 (despite a sharp decline in deal count).

We used CB Insights data and analytics to dig into the data surrounding travel tech investment trends, including deals and dollar breakdowns, and most well-funded companies.

Travel tech startups raised $867M across 51 deals in Q1’16, (the lowest deals total since Q4’14). While the quarter saw a significant drop in deal count, it also marked a strong recovery in funding, up 133%, after the plunge in Q4’15. That points to a quarter that saw relatively few, but very large deals on average

In fact, the three largest travel tech deals in Q1’16 accounted for 62% of funding. Each of the three deals took went to startups based outside the US: India-based Ibibo Group, Scotland-based Skyscanner, and China-based Travelzen. 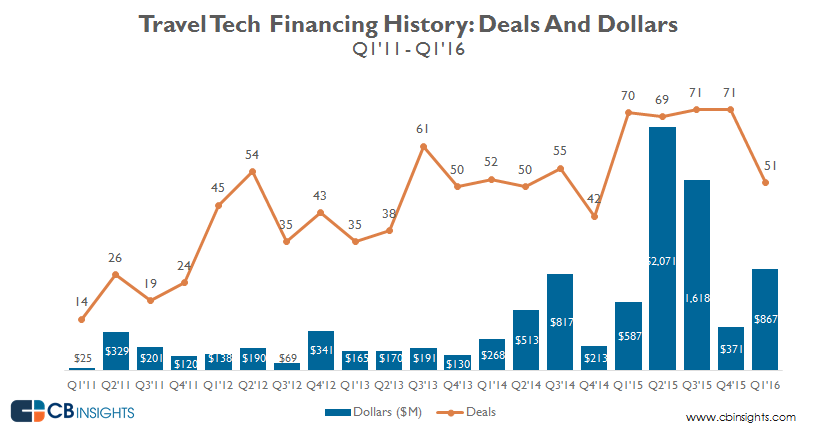 Two of the the top 10 most well-funded travel tech startups have raised more than $1B in total funding to date.

The list includes notable unicorns like Airbnb, TuJia, and South America-based flight- and hotel-booking site Decolar. Several of the most well-funded companies on our list raised in Q1’16, including India-based Ibibo Group and Scotland-based Skyscanner (the latter is also on our unicorn list).