Research Brief
3477
There have already been 18 travel tech exits, including one IPO.

According to CB Insights data, there have been 18 travel tech exits globally so far in 2016, with 17 M&A transactions, and 1 IPO (Indian online travel services provider Yatra). That compares to 13 exits (including 1 IPO and 12 M&As) last year.

For background, travel tech startups raised $1B across 45 deals in Q3’16 through 9/21/16 — and with Q3 coming to a close, the industry is on track for an over 40% decrease in deals but more than a 70% increase in funding over last quarter. The funding boom is primarily due to Airbnb‘s $850M Series F round in August.

We define travel tech as tech-enabled companies offering services and products focused on tourism, including booking services, search and planning platforms, on-demand travel, and recommendation sites. Car-hailing services are excluded from this analysis. Only first exits are included.

Travel tech exits have fluctuated over the past five years, with 2014 through 2016 YTD (9/21/2016) showing the only uptick in exit activity across more than one year — this year’s running total of 18 exits already tops all previous years. 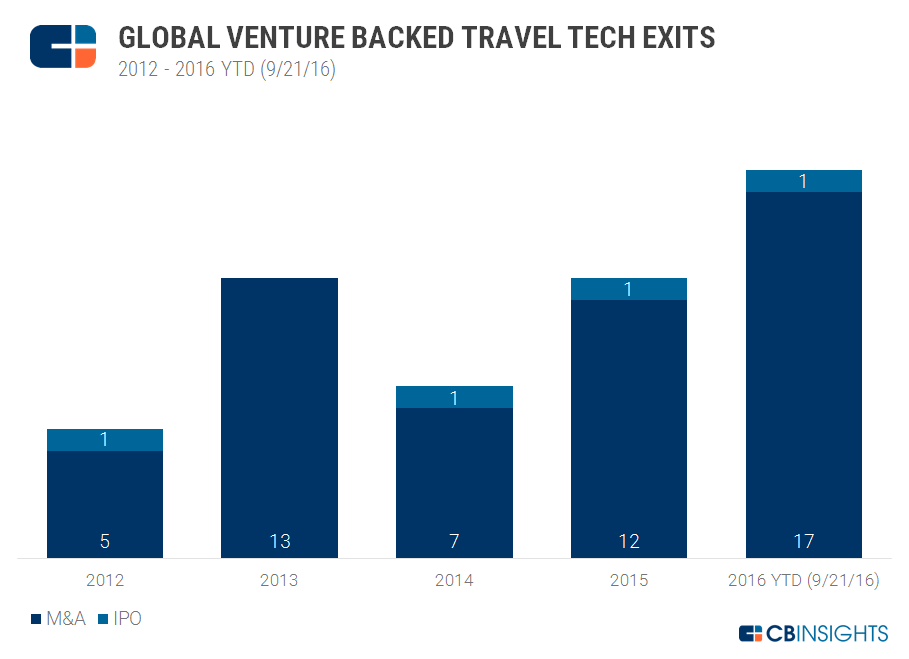 Most Well-Funded Companies Before Exit

Based on disclosed funding, Kayak Software was the most well-funded venture-backed travel tech exit since 2012. The company went public in July 2012. Rounding out the top three spots are Lvmama and Tuniu.

Based on CB Insights valuation data, below are the top five travel tech exits since 2012. Kayak Software takes the top spot with the most valuable exit, and the most funding before exit, as noted above. Yatra was the second most valuable travel tech exit over the time period tracked, though it was only the fourth most well-funded company at exit. The company Onefinestay is also on both top five lists.