Corporations and their corporate venture arms — including Tencent and Google Ventures — have been steadily increasing their investment in travel tech over the last five years.

Corporate investors have already participated in 37 deals to travel tech startups in 2016 year-to-date (9/20/16), in rounds that contributed nearly $900M to the category.

Dollars through the end of this year are projected to land well below the $2B+ we saw from corporate-backed deals last year. However, deals with corporate participation are projected to surpass 50 this year, which would be a five-year high for corporate investment activity in travel tech.

Corporate investors are mainly funding travel tech companies in the US and China. And these investors are mostly participating in early-stage rounds (seed/angel and Series A).

We used CB Insights data to see funding trends involving corporates and travel tech startups, their activity by deal stage and country, and identified the most active corporate players in this space.

Corporate financing activity in travel tech grew significantly over the last five years and deals are on pace to reach an all-time high at the end of this year. The most pronounced period of growth occurred in the three years from 2013 through 2015.

A cohort of mega-rounds involving corporate backers are responsible for the peak corporate funding dollar total to travel tech startups in 2015. The companies that obtained mega-rounds over $100M last year were: LY.com (the aforementioned $967M round involving Tencent), and rounds going to several unicorn companies valued at $1B+: Tujia ($300M Series D), and Decolar, which saw Expedia as the sole participator in a $270M round in which Expedia took a significant minority stake in the startup. Airbnb also raised a mega-round last year, however, no corporate investors participated in that round.

So far in 2016, there have been three travel tech mega-rounds with backing from corporations. The Indian company Ibibo Group secured a $250M financing round from the internet and media giant Naspers in February. The company is also backed by Tencent. The Scottish unicorn company Skyscanner, which is valued at $1.6B, secured a $192M Series C investment in January, with participation from Yahoo. Huoli, a Chinese company with backing from HNA Group, secured a $144M Series C round in April. 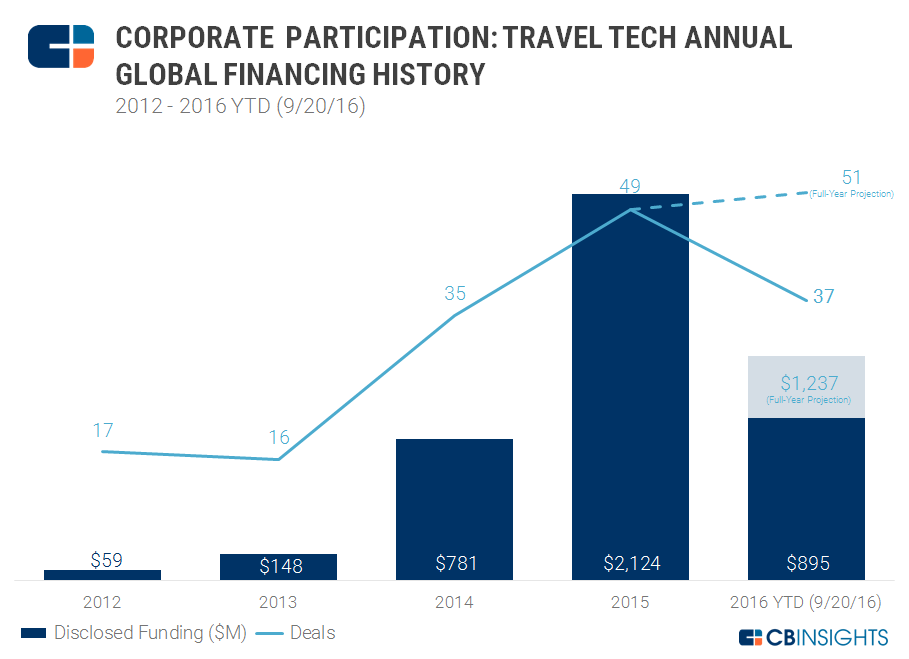 Looking at quarterly financing history in travel tech, activity began to ramp up in Q3’15, and as of Q2’16 there were 5 quarters straight of 10+ deals.

A year later, in Q3’16, some top deals include two Indian companies: Treebo Hotels ($17M Series B) backed by Bertelsmann India Investments, and Travelyaari ($7M Series B) with participation from The Times of India Group. 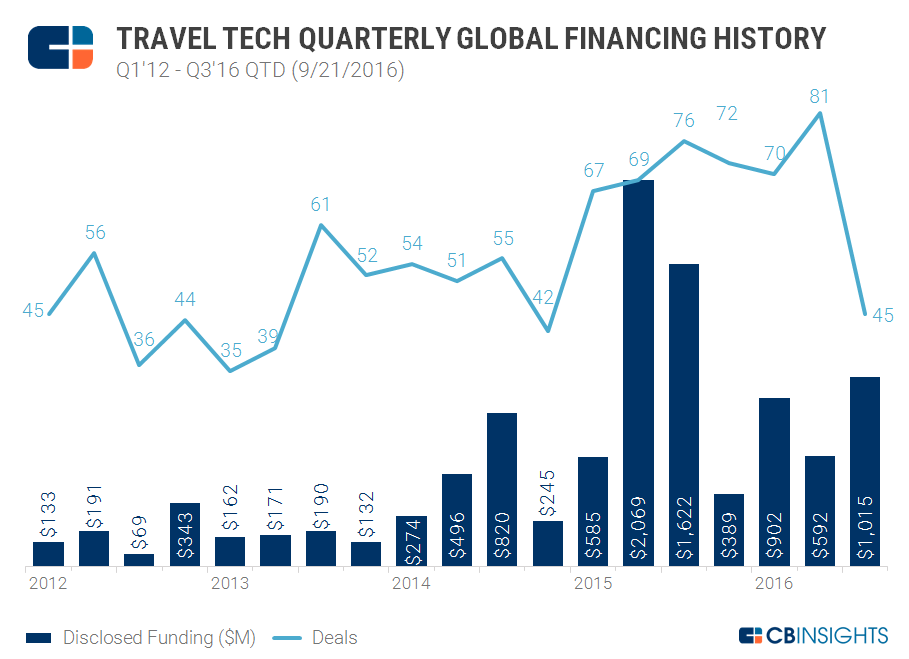 Corporate funding activity to travel tech startups skews towards early-stage investment rounds. From Q1’12 to Q3’16 quarter-to-date (9/20/2016) almost half (48%) of travel tech deals involving corporates were for seed/angel and Series A deals. Series E+ rounds with corporate participation saw the fewest number of deals since 2012, at only 1% of the total.

Notable Series A investments this year include: the French company Misterfly ($22M) with backing from Vente Privee, the Indian company Fabhotels ($8M) with participation from corporate investors including Qualcomm Ventures, and the German company Distribusion ($7M) with backing in that round by HR Ventures. 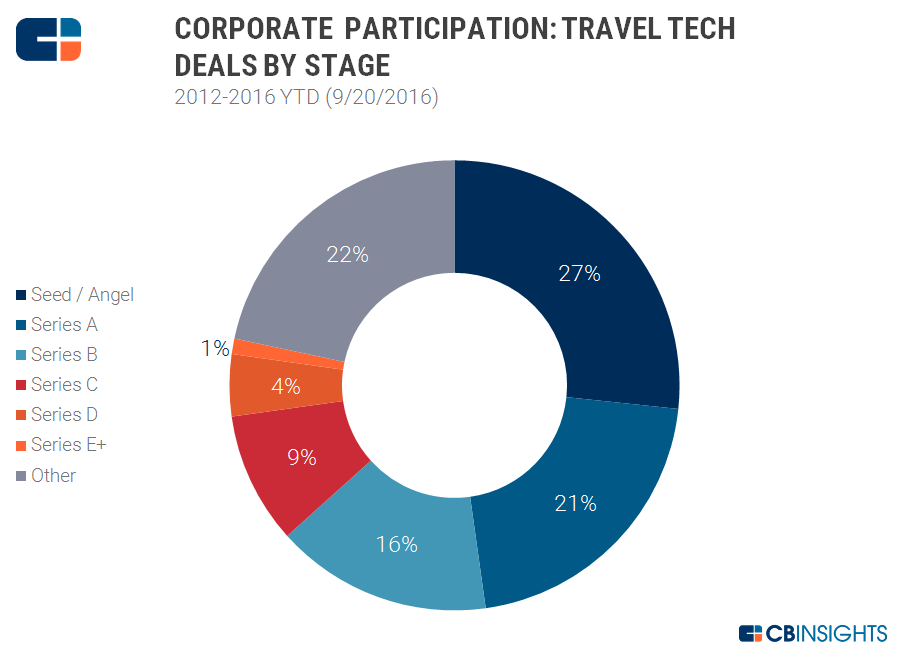 The US takes the largest share of deals in travel tech with corporate participation. China comes in second, and India rounds out the top three countries for corporate investors in travel tech. The rest of the world’s share of travel tech deals involving corporates was evenly distributed, with no other country taking more than 4% of the global total. 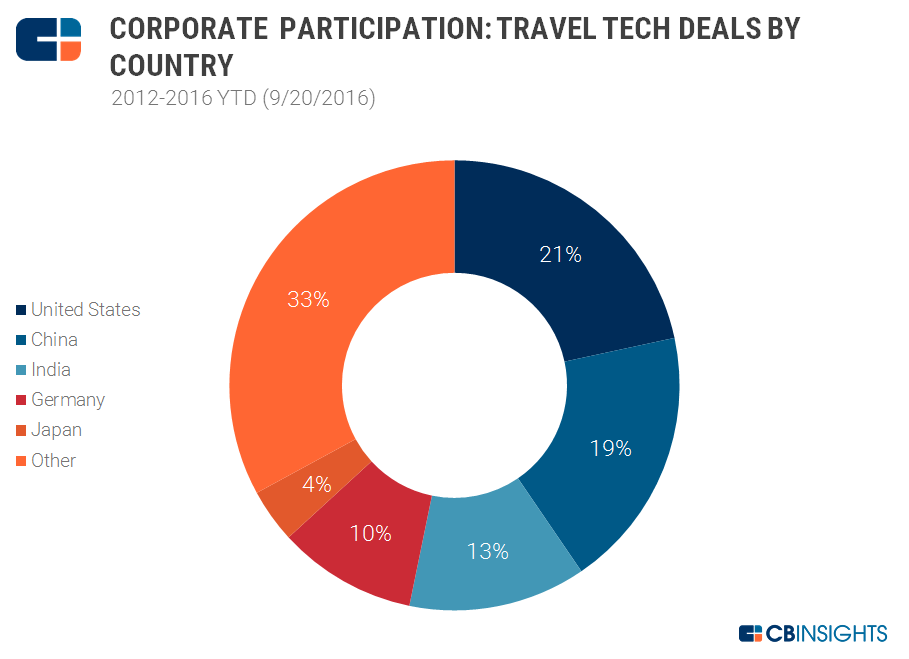 The largest deal involving corporates in travel tech since 2012 was secured by the Chinese company LY.com ($967M), in July 2015. Tencent was an investor in that round, in addition to backing the company in earlier Series B and Series C rounds.

Topping the list of most active corporates in travel tech is Tencent. Tencent’s recent travel tech bets include participating in a $15M Series B round in March 2016, to the American company World View, which aims to take passengers on a balloon ride to an altitude of 30 km from where they can get a space-scale look at the earth. Tencent also backed the company in November 2014, with a Series A investment.

Google Ventures and Concur are tied as the second most active investors, followed by Nokia Growth Partners and Recruit Strategic Partners, tied for third.